FROM THE ARCHIVES: SOME FUN STUFF FOR NEWCOMERS 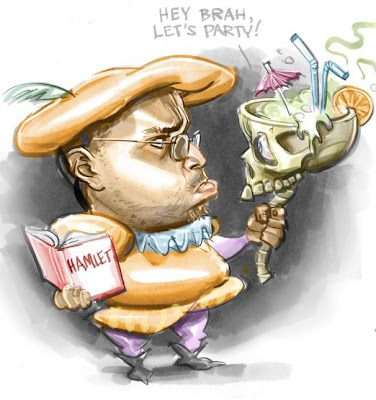 For any of you out there who may be newcomers the the Vault of Buncheness, I bid you a heartfelt "Welcome!" Here's a shortcut to some of my own favorite pieces from the archives; there's a lot here to mull over and there's something for everyone (not all of which is work-safe), so enjoy! And this is only the tip of the iceberg...

-Yer Bunche, keeper of the Vault of Buncheness and champion hen-teaser

JAMES BOMB: WHAT IS THE WORST 007 FLICK?

STUPID MOVIES YOU NEED TO SEE

LOVE SONG TO THE MIGHT AND MAJESTY OF THE CHILI DOG

FAY WRAY, KING KONG, AND THE END OF AN ERA

COSTUME DRAMA: HALLOWEEN AS A SUPERHERO

FOR THE LOVE OF WARREN: HOW I DISCOVERED REALLY GOOD HORROR COMICS, AND SOME FERVENT RECOMMENDATIONS FOR BEGINNERS

THE SACRED 25: THE SONGS I SIMPLY CANNOT LIVE WITHOUT

50 THINGS I LEARNED FROM THE MOVIES

STRAPHANGER’S VENGEANCE: PEOPLE ON THE SUBWAY WHO NEED SEVERE BEATINGS

SMOKE ‘EM IF YA GOT ‘EM: CONFESSIONS OF A FORMER FULL-TIME STONER

THE UNBELIEVABLE BUT 100% TRUE STORY OF “SUPERCAT”

Yo, Bunche! Saw this, thought of you:

And no life is complete without at least one click on http://www.rickparkercomics.blogspot.com

Odd question for your Mentors'-hooded self:

On that mix tape you burned for me ages ago: the disturbing ramble about burning a guy alive and watching the look in his eyes as he realized he was dying - was that El Duce of The Mentors? It seems to me as if there were some Mentors songs on that tape, but it's been ages.

That was indeed El Duce, but it's from an album by Gardy-Loo called "Perverts On Parade." El Duce had parted ways with the Mentors at that point and was scooped up by Gardy-Loo shortly before his fateful date with a train.

Cool. Thank you - thought so. That would explain why I couldn't find it.

Y'know, the Mentors are still together here in Seattle, and played a gig locally roughly a year age. Not sure if I'd want to see 'em or not...

Good gods! I actualy FOUND "Perverts on Parade" on itunes. Thanks... I think.

Oh, thanks also for your shout-out to "Empowered." I bought Vol. 1 yesterday, and we found it laugh-out-loud funny... and more touching than we would have expected. Count me a fan of a book I would not have given a second look to otherwise. Cheers!

finally, it's so hard to find stuff because you don't have a search bar

50 things i've learned from film = Outstanding!
two sub additions -
50a: Gabriel Byrne can never be trusted
50b: When someone in a cop film says "Just trying to help officer" they are most definitely NOT trying to help.

I second the desire for a search bar.