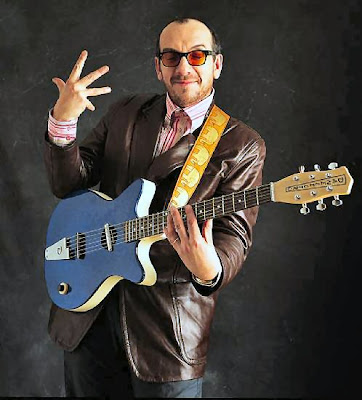 Today is the 56th birthday of Declan Patrick MacManus, aka Elvis Costello, one of my favorite musicians of all time (especially when backed by the Attractions). I cannot count how many times I've listened to his first five albums (with his eighth, PUNCH THE CLOCK, getting slightly less attention), and while his more "mature" work is quite good, none of his work will ever match the magic I experienced with his early stuff. Looking like an even dorkier version of Buddy Holly but possessing an eloquently-stated youthful vitriol, his tunes very much spoke to me and helped get me through the latter half of my teen years in a way that Devo's high-tech leanings couldn't. While the spud-boys from Akron played in the field of the mind, Costello very much dealt with matters of the heart, expressing anger, frustration, the awkwardness and discomfort of relationships and all that dreadful shit that youth is heir to, and who couldn't relate to that?

So, to celebrate Costello's birthday I intend to play 1980's GET HAPPY!! in full, followed up by the two-disc, personally-compiled set of my favorite of his works (several of which reside on GET HAPPY!!, but I'll never tire of them), a set that my old friend Cat and I have listened to until the songs in question have become a part of our DNA. 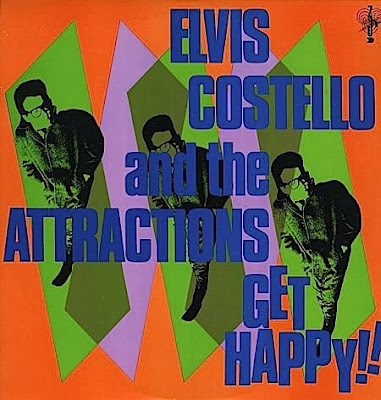 And with that, I'm off to crank me some Costello! I suggest that you do like wise.
Posted by Bunche (pop culture ronin) at Wednesday, August 25, 2010

Have you heard yet about Storm Large? She's an amazing talent on her own... but when she gets hold of Costello's "I Want You," the bricks themselves tremble at her wrath.

Y'know, I was working at B&N a few years back when a new Elvis Costello album came out. Hearing it, I thought, "Jeeze, Elvis - the angry kid behind My Aim is True and Armed Forces would beat the living shit out of the guy who recorded this old-man drivel, simply because it had to be done." I love his old work, but as far as I'm concerned, Elvis Costello's ship sailed off and sank a long time ago.