BIG SURPRISE — SPIDER-MAN: TURN OFF THE DARK MAY BE DELAYED YET AGAIN 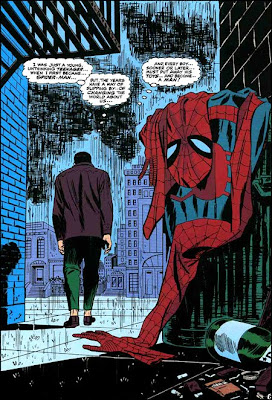 No one is less surprised than Yer Bunche to read that SPIDER-MAN: TURN OFF THE DARK, the Great White Way's great white elephant, may have its announced opening night of March 15th pushed back yet again — for what would be the sixth (!!!) time — for reasons outlined in the NEW YORK TIMES article found here. To crib an infamous quote from a very publicly drunk John Wayne, "it's getting to be re-goddamned-diculous." No, on second thought, this has gone waaaay beyond re-goddamned-diculous.

With all re-tooling and bringing back of Bono and purported bringing in of outside help, I would love to know just how far over its $65,000,000 budget this fiasco has gone. It looks like the considerations currently underway are taking into account the likelihood/stone cold reality that this show will never earn back its expenditures during its domestic run, so now the objective is to get ready to turn this gaudily-painted whore loose on the international market. Good luck with that...
Posted by Bunche (pop culture ronin) at Sunday, February 27, 2011

I'm just loving this update for another reason all together. The fact that you a label "OH FOR FUCK'S SAKE." Poignant.

I wonder how many mosquito nets & AIDs medicine that 65 Mil could have bought, way to go Bono now go back to Ireland & pay your fucking taxes...they really need it over there.