QUESTIONABLE SONG OF THE WEEK: Macabre's "VAMPIRE OF DUSSELDORF" (1993)

Really, what can you say about an entire album of nothing but death metal tribute songs to serial killers, complete with a cover parodying the iconic SGT. PEPPER'S LONELY HEARTS CLUB BAND album cover, only featuring a portrait of the band surrounded by images of a few dozen infamous murderers? 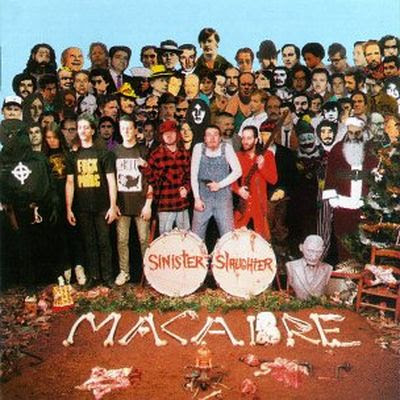 The album itself, SINISTER SLAUGHTER, is quite unusual for a death metal record because its vocals are intelligible enough to make out, as opposed to the Cookie Monster stylings usually evident in such stuff. All twenty-one tracks are odes to assorted serial killers and mass murderers, including "What's That Smell?" (a ditty about Jeffrey Dahmer) and the Daniel Rackowitz tribute "Is It Soup Yet?" (Rakowitz killed his dancer girlfriend and made her into soup, which he kindly fed to the local bums in Manhattan's Thompkins Square Park back in 1989). But my favorite (?) of the lot is "Vampire of Dusseldorf," a tune sung from the point of view of Peter Kurten, a truly horrific human being who committed various murders, acts of molestation, general violence and sexual assault until his well-deserved death by guillotine in 1931 (which he was reportedly psyched about, by the way). 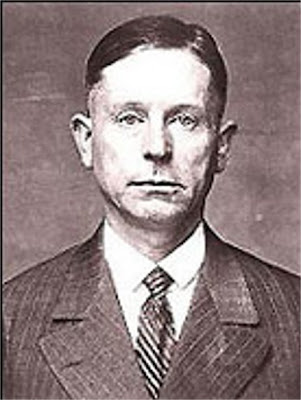 Mug shot of Peter Kurten, the infamous "Vampire of Dusseldorf."

The song's chorus is what really makes it, thanks to it's "Can Can"-esque peppy tune fused with the following lyrics:

I need a victim to do things sickening/I just want to make you bleed
My knife is gashing, your blood is splashing/To see your blood is what I need

Ever so heartwarming, no?
Posted by Bunche (pop culture ronin) at Saturday, February 12, 2011

Do yourself a favor and track down DAHMER. Macabre's magnum opus, such a great record.