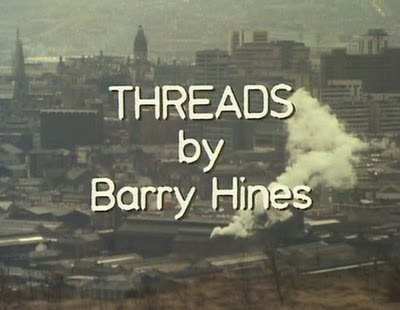 In the fall of 1983, I and millions of Americans sat glued to the TV for the airing of THE DAY AFTER, a made-for-television film depicting the events leading up to a nuclear war and its aftermath as experienced by an assortment of ordinary people in Kansas and Missouri. For American television at the time, the film was harsh stuff and deeply affected many who saw, average Joes who had never truly considered what the horrors of surviving a thermonuclear exchange, and the discussion it inspired chilled many during those tense days near the end of what was known as the Cold War. Those like me, kids who grew up under the very real threat of a possible exchange between the good ol' Yew Ess of Ay and Russia and had absorbed numerous fictional scenarios of what possibly awaited those fortunate (?) enough to live through the atomic firestorm, were not necessarily as moved by THE DAY AFTER.

Anyone who has a real interest in science-fiction has likely contemplated the scenarios postulated in such stories — space travel, first contact with extra-terrestrial sentients , planets entirely populated with super-intelligent, gorgeous and horny females with three D-cup breasts with nipples perfect enough to make you cry — and may have done some research on how such things would turn out in real life. Having been exposed to post-nuke stories since as far back as I can remember (I think my first exposure to such was the classic TWILIGHT ZONE episode "Two"), I read a lot about scientific realities of what nuclear warfare could do to mankind and the world, so I knew about the effects of EMP's , radiation sickness, nuclear winter, all that stuff, so when I processed what I saw in THE DAY AFTER, I considered it to be a more dire descendant of the then-recently-defunct disaster movie genre. In other words, melodramatic bullshit that wrung pathos from a dire plot setup, and in this case it did such with the most dire subject imaginable, cheapening an outright nightmare to the level of a TV movie of the week (which THE DAY AFTER obviously was). Although not packed to the rafters with thespians familiar from endless doses of made-for-TV potboilers — folks like Linda Purl, Shaun Cassidy, and the ubiquitous Bert Convy — the film featured enough recognizable actors to completely take me out of the "now" of the narrative and make me see it as a fallout-tainted production of OUR TOWN.

The following year, England's BBC aired THREADS, a film that was from all accounts more or less the same basic scenario as THE DAY AFTER, only done more in the style of a "docudrama" and treated with a high degree of realism. Everything I'd read about intrigued me, but I never had the opportunity to see it (I have no idea if it ever aired in the States). Then, over twenty-five years later, during one of my weekly hang & bullshit sessions with certain friends and former colleagues from the comics industry, the conversation turned to movies that seriously messed with our heads when we were young. Two of those in attendance grew up in the United Kingdom during the 1980's — one in England and the other in Belfast — and both of them practically fell over each other to declare THREADS as the movie that not only messed them up when they saw it as early-teens, but they both flat-out stated it will stay with them forever and that they never ever need to see it again. Anything that could so affect two such relatively hard men was something I had to experience for myself, so I ordered the DVD shortly before Christmas and waited to watch it until I was in the right frame of mind to endure it. Then yesterday afternoon rolled around and the bitter cold compelled me to stay indoors once I'd finished the days errands. Having not much else to do other than make my way through a stack of around twenty-five DVDs that I had not yet watched, I gave it some thought and decided to finally see just what the big deal was about THREADS.

Now that I've seen it, I have to say that it's the single bleakest and most realistic "day after" film ever made. It's unrelentingly depressing almost from the opening frame, and it docudrama narrative takes place in the Northern English city of Sheffield, following the daily lives of two families connected by the "threads" of everyday life.

The film is less of a narrative than a tracking of the progression of what happens to a pair of young lovers when the female turns up pregnant and the two decide to get married and move in together. We get to know them and their families for about the first forty minutes or so as their lives go on while political tensions between the Russia and the United States (who are supported in their efforts by Britain) build to international nuclear strikes. The film's structure is a series of updates beginning some two weeks or so before the bombs fall, and after that it's a completely realistic, no-punches-pulled chronicle that skips ahead by days, then weeks, then a year, and eventually culminates some thirteen years after, by which point the greatly depopulated world is a struggling, virtually medieval agrarian wasteland and there's really very little point in humanity bothering to go on. The characters we get to know all are either killed outright during and just after the nuclear holocaust, or else they go on to survive in a world where the living absolutely envy the dead. The arc involving the pregnant woman is compelling and tragic, following her pregnancy (during which she receives zero prenatal care), the agonizing and unassisted birth of her daughter (who is miraculously born normal), and the skip-forward to ten years later and the mother's death, after which the daughter must fend for herself in a bombed-out landscape populated by immoral and opportunistic scavengers and looters. The narrative culminates three years later, when the girl is thirteen and falls in with a duo of scruffy teenage survivors, one of whom rapes her and impregnates her after becoming aroused as the two fight over a crust of bread (thankfully we only see enough of the preamble to the assault to get the idea of what's about happen, at which point the camera shifts to an exterior shot of the structure where it happens). The poor girl, alone again and in labor, eventually seeks shelter in what appears to be the remains of an abandoned hospital, populated by an older woman and a man who has apparently lost all touch with reality. Despite older woman trying to shoo her away and advising her to "go home and use your common sense" to give birth, the girl gives birth to the next generation: a horribly deformed mutant that we barely catch a glimpse of, but that elicits a scream of abject revulsion from its young mother. The frame freezes on that image and the film comes to an abrupt end.

THREADS was definitely worth seeing and it's incredibly well done and believable, cast with actors whom I did not recognize, and that aspect helped keep me rooted in its reality (although I was briefly jarred when I recognized the voice of Ed Bishop, best known as Commander Straker from UFO and the voice of Captain Blue on CAPTAIN SCARLET AND THE MYSTERONS ). That said, THREADS left me literally shaken, dazed and numb by the film's end, a feeling I've never experienced with any other movie, and I had to go for a walk outside in twenty-degree weather to clear my head. It was excellent, but I now join my U.K. pals in never wanting to sit through it again. It's all utterly hopeless and miserable, so I very strongly urge you not to watch it unless you're really in the right mood for this kind of thing. (NOTE: this film is not available on DVD in the U.S., so you'll need to get the British Region 2 disc and have an all-regions player in order to watch it.)
Posted by Bunche (pop culture ronin) at Wednesday, February 09, 2011

Actually, "Threads" was a PBS Channel 13 staple back in the eighties and I saw it a couple of times myself. They wisely followed it up with an airing of the "No Nukes" concert to shake people out of abject despair.

Ugh, I remember this movie, and what I remember was pretty revolting and scary. As good a cautionary tale as you can get, I imagine.

The movie messed my head up for a long. I was in high school at the time and I was freaked out!