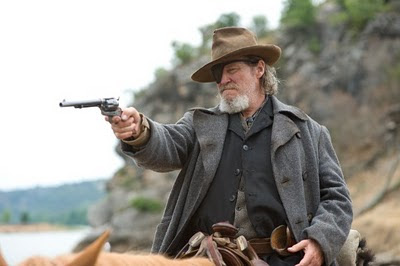 I don't know know what you thought of the 1969 TRUE GRIT, but I saw the remake yesterday and it was an odd experience because I saw the original for the first time since I was a kid a few months back and I thought it was merely so-so. The remake, though purportedly more true to the source novel, was virtually a beat-for-beat remake of the original and consequently it was also so-so. It does improve on the original in a few ways — chief among which are not having the incredibly annoying Kim Darby in the lead, and a better, less "Hollywood" ending — but for the life of me I can't understand why it's getting the universal critical acclaim it's racking up. My guess is that since westerns are pretty much a dead genre, audiences (and critics) are starved for "horse operas," so they go crazy when a competent one shows up in the current climate of lame rom-coms, cookie-cutter Judd Apatow films (almost all of which are overrated and not funny, at least not to me), superhero movies of wildly varying quality, Michael Bay cinematic abortions that display a shocking contempt for their audience, and the annual blockbuster season that turns the screen into a toxic waste dump. The new TRUE GRIT is not a "bad" movie by any means, but it simply is not "all that." Here's the breakdown:
The one thing that I am glad of as a result of sitting through it is that it reminded me of MAD magazine's excellent 1970 parody of it (from MAD #133), drawn by the stellar Mort Drucker (one of the best cartoonists ever, whose work is often unfairly overlooked because it runs in a humor magazine). I looked for images from it online and while doing so I was surprised to find that several reviewers of both the new and old version of the film cited that they found the MAD version more memorable than the actual movie. Next to George Woodbridge, I think Drucker was the very best of MAD's artists from the moment they shifted from a comics format to a black & white magazine. Check out these panels to see what I mean: 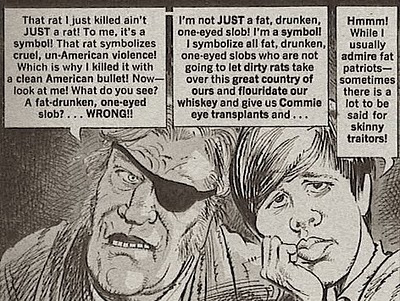 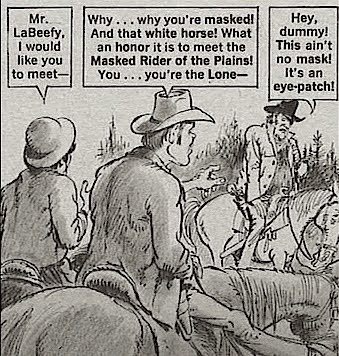 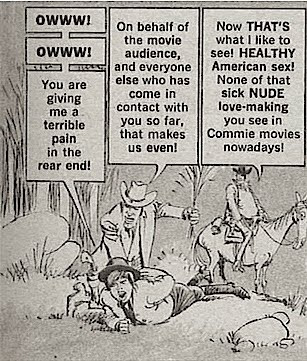 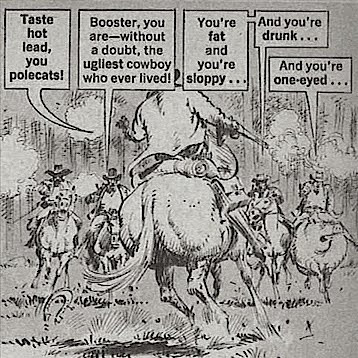 (I love how the one gunman is riding a hog for no apparent reason.) 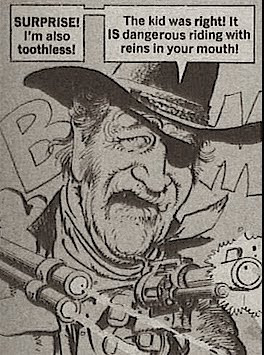 But I'm straying from the remake, so allow me to sum up by stating that the new TRUE GRIT is worth seeing, but I suggest waiting for cable. It ain't worth $13.00 (NYC ticket price).
Posted by Bunche (pop culture ronin) at Sunday, February 06, 2011

I remember that MAD issue. Great movie parody, from when they were at their peak.

The kid looks uncomfortably like a foreshadowing of Bieber. Scary.

I wanted to originally comment on this back when you first posted it.

It's funny how you basically panned the movie, because if you check out other elements of the blog world, especially those blogs that have to do with writing and specifically writing the western genre, a lot of those people are incredibly psyched up and looking forward to seeing this movie.

Gotta remember the era when the original was made. Quite often the story that a particular movie was based on was very salty and thus the treatment of it often had to be sanitized in order to have muster with the powers that be.

@G, I am very much aware of all of the points you make and did take the era of the original into account. I also noted some elements of the new version that I felt were superior to the original. That said, I still don't think much of either version of the film. There are plenty of western narratives that I greatly enjoy — THE SEARCHERS, THE BALLAD OF CABLE HOGUE, LITTLE BIG MAN, THE WILD BUNCH, the list goes on — but for whatever reason, TRUE GRIT just never did it for me.