GETTING PSYCHED FOR CAP

As the summer blockbuster season looms, the film adaptations of Marvel Comics heroes Captain America and Thor are generating great interest from us comic book geeks. I love both characters and am on record as being a serious Thor booster, but I'm surprised to realize that I'm far more excited about seeing Cap's flick than the thunder god's. The teaser poster for CAPTAIN AMERICA just got released and I dig its vibe. 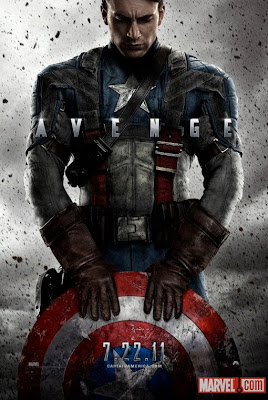 A decent shot of Cap's costume has also been released, and I think it looks pretty good (though I would have liked the wings on his helmet to look like they do in the comics, and I would like a good look at his boots). 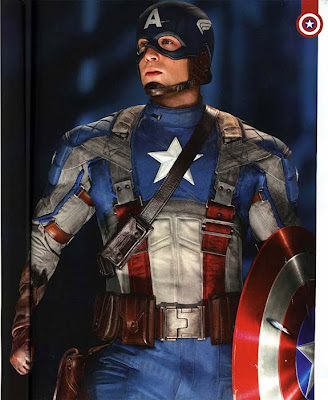 So, yeah, I'm basically on board and psyched for this film. I just wonder if they're going to somehow sneak the 1960's cartoon version's theme tune into the movie, like they did in IRON MAN. Since Cap's supposed to start out as a USO performer (hence the costume), I'm betting it'll turn up as a musical stage number. And for those of you who missed it or are too young to remember, here's the song in question: