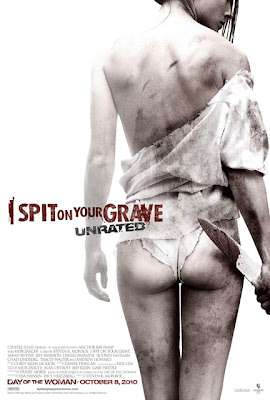 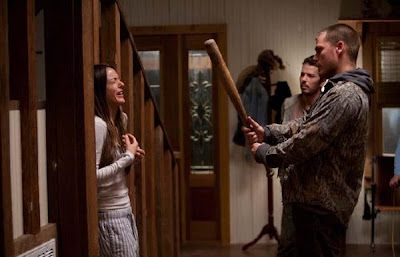 Southern anti-hospitality at its very worst.
The basic story is the same as the original: Jennifer Hills (Sarah Butler), a writer from The Big City, rents a place in the backwoods — apparently Upstate New York in the original, Louisiana this time around — runs afoul of some incredibly foul lowlifes, gets agonizingly gang raped by said lowlifes, survives her ordeal and unleashes gruesome vengeance against her assailants. This time, however, the quality of the filmmaking is very far removed from the rather Paleolithic (though well-intentioned) results displayed in the 1978 version. The remake is quite obviously the work of real cinematic craftsmen and displays a level of polish and style totally absent in Zarchi’s dire classic, which makes the shattering events depicted in it more agreeable to sit through. (While any depiction of gang rape is going to be hard to sit through simply by default, the original’s bargain basement qualities imbued it with an unwashed and squalid look and tone that at times felt to me like some scabrous hobo was forcibly shoving his dirtiest, most callused finger straight down my throat.) The visual style is somehow lush in presenting the stark isolation of the story’s Louisiana backwoods setting, and the desolation helps to plant the viewer firmly into its lonely reality.

And speaking of reality, there were several elements in the original that would not have allowed for willing suspension of disbelief in the 2000’s, and they are addressed quite deftly. We currently live in an age of cheap and very conveniently portable mass communication technology, which simply did not exist back in 1978, so our heroine would be equipped with a cell phone that would allow her to call for help. Or rather that would be the case if she were not seen accidentally dropping her cell phone into her cottage’s toilet early in the film. Also, if a crime of the kind that Jennifer endures and survives after being pretty much presumed dead (despite the considerable efforts of her filthy assailants), today there would be all manner of ways for law enforcement officers to bring Jennifer’s violators to justice (if justice could truly be provided by our justice system in the wake of the severity of the acts perpetrated), with DNA evidence matching immediately springing to mind. Thus it was necessary to add a fifth rapist to the scenario, namely the unspeakable Sheriff Storch (played with horrifically creepy gusto by Welsh actor Andrew Howard).

Andrew Howard as the vile Sheriff Storch.
Storch is the only police officer shown, and the area he allegedly polices is so remote that perhaps only one lawman is all it really requires. Too bad that despite him being seen to be a loving husband and father when not on duty, he’s worse than any criminal he’s likely to encounter because of his association with the pack of rapists, guys it’s made clear that he’s been friends with since they were kids, and his ability to inflict such grievous harm on an outsider reveals a sadistic sociopath who is allowed to wield lethal power by law. And by virtue of his training in the enforcement of said law, he knows all about how to cover up all trace of the crimes he and his pals commit, which makes him vital to them getting away with all of it.

And while we’re discussing rapist scum, it should be noted that the gang of redneck louts who plot the violation and (failed) murder of Jennifer includes a woman-hating Alpha male leader, a fairly nondescript follower, an overweight wielder of a video camera who fancies himself a budding cinematographer and voyeuristically captures the entire gang rape on tape, and a mentally handicapped repairman, whose virginal status is used by the Alpha male leader as an excuse to rape the city gal outsider. These guys are given a lot more in the way of developed personality that the louts found in the 1978 version, and that makes them that much more interesting and vile. The fiends in the original have little you can say about them as individuals other than that they are personification of the worst of male urges, in essence interchangeable ambulatory penises that utter dialogue. In the remake’s case we are afforded peeks into the quirks of the men as individuals and by allowing us to get to know what they’re like, an aspect that grants them an understandable (though totally evil and loathsome) humanity, and it is that knowing of them as something other than largely undefined cardboard cutouts that makes us hate them all the more. Especially Sheriff Storch, whose vicious misogyny and behavior are fascinatingly contrasted against what we see of his home life. He’s a self-proclaimed god-fearing churchgoer with a loving wife who’s about eight months pregnant and looks for all the world like a fertility goddess transplanted to the early twenty-first century, and he’s also got a sweet daughter of maybe nine years old whom he clearly dotes upon. The man is a completely different person as a husband and father, and is presumably likewise as a citizen and lawman, but when is a position to commit a great evil in support of his friends and joining in on their animalistic “fun,” he’s revealed as a law-breaking predator who preys upon the weak and isolated. If Jennifer went missing in his Podunk little town, it’s apparent that her disappearance would be noted by few, and the only locals who knew she was there are the sheriff, the gang of rapists, and the sweet old guy who rents her the cottage (the great Tracy Walter), so doing whatever the hell he and his buddies want to with Jennifer is as simple as pie to get away with, especially since disposing of her body would only require chucking her used and abused corpse into the alligator-infested river. Jennifer’s is the worst imaginable position to be in, and these filthy bastards know it and take full advantage of it, giving vent to their pent-up hatred of women and taking a joyous glee in doing so.

But, as was the case in the original, Jennifer does not take her assault like the whimpering victim the rapists anticipated, and when she throws herself off a bridge and into the alligator-infested river rather than be outright blasted to kingdom come by the sheriff’s pump-action shotgun, she survives, holes up in a deserted shack for a month and lives on whatever she can catch (including rats) while she uses her writer’s imagination to plot appropriately poetic vengeance that would have done the writers of the classic E.C. horror comics proud. This time around the script wisely does away with the idea of a woman who was so brutally abused luring her attackers to their doom by fucking them. It's not just her body that's been raped by these scum; Jennifer's basic humanity has been utterly taken from her, and as a result she is reborn as what is for all intents and purposes a monster. It’s a tragic rebirth as a fury every bit as savage and implacable as the variety found in classical Greek mythology. Each and every one of the rapists gets his in a very big way and, according to the director and producer’s commentary, their just desserts were so nasty that some of the audiences were so outraged by the severity of the retribution that they stated they began to feel sorry for the rapists. That was not the case with me as a viewer because of my simple belief in the mantra of “If you abuse with the Johnson, you lose the Johnson,” or some other form or punishment involving some form of medieval justice, and I found what they received to be gruesomely satisfying in every way.

So the bottom line on what at first seemed an unnecessary remake of a cruel ‘70’s exploitationer teeming with ultra-sadistic and seemingly pointless misogyny is that the 2010 I SPIT ON YOUR GRAVE is one very nasty and visceral motherfucker that I’m extremely shocked to have enjoyed. Yes, I enjoyed it, but then again I’m a fan of what I call “the cinema of vengeance,” and there are few examples in the genre as strong as this in every aspect. It’s easily the best of the current remake/re-imagining wave, and I highly recommend it to any and all who have the stones to handle it. And whatever you do, make sure to watch it with the director’s commentary after seeing it for the first time. Very interesting stuff.
Posted by Bunche (pop culture ronin) at Sunday, February 20, 2011

Thanks, Bunche... and now, once again, I'm curious to see a film that I had previously scorned, simply because you've advocated for its viewing.

Curious: Have you yet seen Hard Candy, The Girl With the Dragon Tattoo, The Girl Who Played With Fire, or The Girl Who Kicked the Hornet's Nest(*)? The "vengeful-woman-dealing-rough-justice" concept seems to be a theme right now... and damned timely one, judging by current events and the ugly trend toward "loutism" in young men and male-centric media. This is especially true when you read the novels that inspired the "Girl Who..." trilogy, which were inspired by real-life rape cases and the (male) author's fury at cultural misogyny.

I get the feeling that the producers of I Spit on Your Grave were sold on the idea of yet another 1970s horror remake, but had no idea what either the original or the remake were about...


--------------
* - There's another recent low-budget "violated woman takes rough vengeance" movie I just saw recently, but I can't recall the title of it offhand. Like the other films mentioned, it's a hard movie to sit through, yet a good-quality film that's definitely centered around payback, not titillation.