A WEIRD FEW HOURS IN MY POP CULTURE WORLD 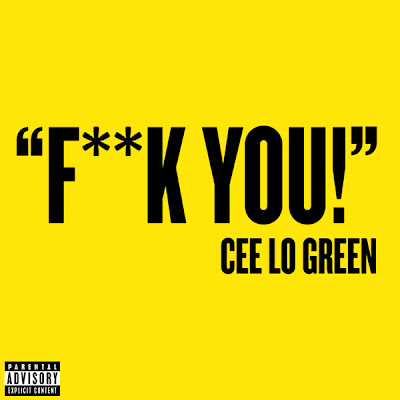 Okay, the following chain events actually happened and I swear you just can't write stuff like this.

If you're a regular reader of this here blog, you know me pretty damned well and are aware of my attitude on most things, therefore you would rightly conclude that I am far from a prude. That said, yesterday afternoon I went round the corner to pick up groceries at the supermarket and when passing the posh shoe store two doors down from it, I was astonished to hear Cee Lo Green's hit record "Fuck You" issuing forth from its open doors as mothers and their daughters merrily shopped to its accompaniment. Even in the year of 2011, I'm kind of astonished there really is a hit song entitled "Fuck You," which only got airplay in the sanitized-for-radio version, "Forget You" (although the unexpurgated and admittedly amusing original could be heard with ease via the Internet).

So imagine hearing this blasting out of a high-end shoe store and no one thinking twice about it. I would expect this from the extremely ghetto shops over in the Fulton Mall area, but not from a tony shop run by white people in this particularly affluent section of Park Slope. (Then again, the salesgirls at the shop are a bunch of old school Brooklyn trash and they can regularly be found camped out for cigarette breaks on my building's front steps, loudly yakking on their cellphones with their girlfriends and unintentionally filling in innocent passersby on the details of their yeast infections and the like.) But, come on. Despite my rather liberal attitudes on most things and what is or is not acceptable, am I insane for finding this completely inappropriate? The well-off mothers who were shopping with their kids did not seem to be the least bit concerned, so am I nuts, or what?

I posted about this odd happenstance on my Facebook wall and was surprised to be met with across the board agreement about the appropriateness of it all, and, being the culturally-enlightening son that I am, I called my seventy-eight-year-old mom to tell her all about it. First of all, she was totally appalled that a song entitled "Fuck You" would exist as all (she has clearly forgotten the music that used to issue from my room some thirty years back) and was simply astonished that the uncensored version would be so blatantly played in public. Following that, I went online to find the video for it so she could witness the song in question and be able to comment on it from an informed standpoint. (Plus I was amused at the thought of the look on her face as she sat there in her house's family room watching a video to a song with repeated utterances of "fuck you.") While searching You Tube for the video, I was pleased to see an official version with an actual narrative, as opposed to one of the several that featured nothing but the lyrics displayed onscreen, and the actual video unexpectedly proved to be very clever, perfectly complementing the song's lyrics and retro-Motown feel. Here's the video in question, and despite my newfound admiration for the piece, I recommend watching it so you'll understand how weird it was for me to hear it in an allegedly family-friendly place of commerce:

I'd been working on a CD of anti-love songs for Valentine's Day while my friend Suzi was bust crafting her annual anti-Valentine's Day web card, and after reevaluating "Fuck You" I decided to add it to the disc. I called Suzi to tell her of hearing the song while on the street, but she had never heard of it (she, like me, avoids listening to pop music radio), so I sent her the video link. (She loved the video, BTW.). Yeah, it was literally a train of "Fuck You"-related fun for a portion of the day.

Then I found out that "Fuck You," a song I first heard months ago and had forgotten about and that had become apparently ubiquitous between then and now — even to the point of the sanitized version being performed by Gwyneth Paltrow on GLEE — was up for a Grammy award for "Record of the Year," and would be performed live on the show by Cee Lo Green himself that very same night. And the capper was that he was to be accompanied by Gwyneth Paltrow (who I wish had performed it in character and red wig as Pepper Potts from the IRON MAN movies) and The Muppets.

Yes, The Muppets. Singing "Fuck You."

I no longer have cable, so I had to wait for a while to see it posted on the Internet, but the previously described scenario really did come to pass, although inevitably utilizing the sanitized version thanks to the existence of the FCC. My mind reeled as I watched Cee Lo Green, a big fat brutha in an outfit that mad him look like some sort of mad, overgrown parrot gene-spliced with '70's-era Elton John, heartily belt out his song while surrounded with an assortment of singing and gyrating non-"name" Muppets. Gwyneth Paltrow (who looked like she could really use one of those head-sized pastrami sandwiches from the Carnegie Deli) handled her vocal portion with aplomb, and the number may just be the weirdest thing I've yet seen performed at the Grammys.

Yes, that all actually happened, and without a trace of lip-synching.

So I guess that's finally it. The whole world has gone completely insane. Wheeeeeee!!!
Posted by Bunche (pop culture ronin) at Monday, February 14, 2011

No, I don't. Please elaborate.