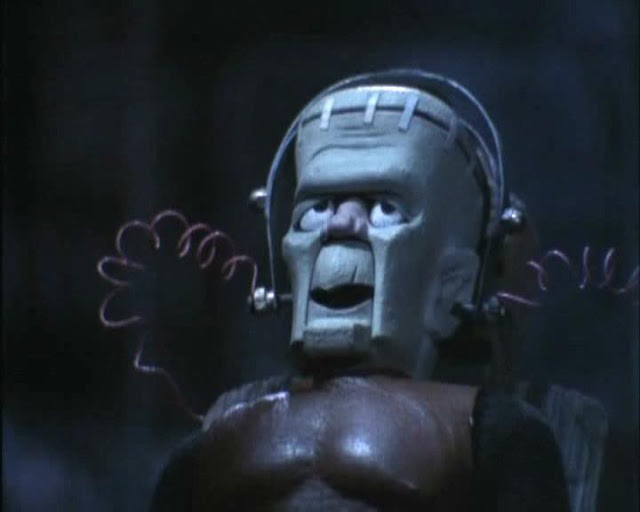 The Monster enjoys an electrical pick-me-up.

When Dr. Frankenstein (Boris Karloff) decides to retire and name a successor to his position of the world's monster elite, he announces a gala event on his remote island/laboratory and invites an all-star who's-who of baleful creatures of the night. Along with his infamous Monster and its mate (Phyllis Diller), the Invisible Man, the Creature from the Black Lagoon, the Hunchback, the Mummy, the Werewolf, and of course Count Dracula all show up, some with their eyes greedily fixed upon the successorship. But Frankenstein throws an unintentional curveball by inviting his nebbishy pharmacist nephew, Felix Flanken, to the proceedings, with the lad firmly in mind as his replacement. 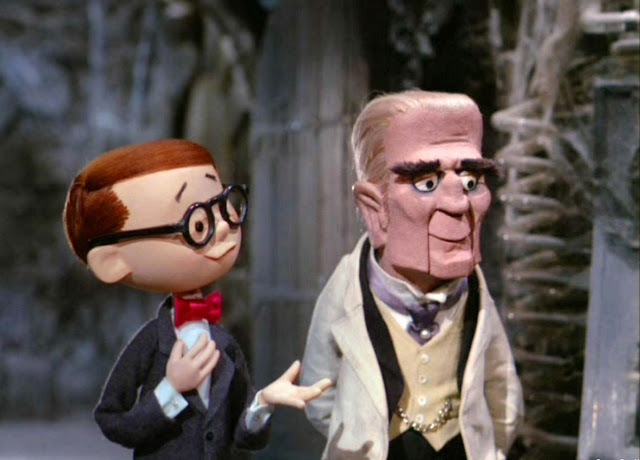 That does not sit well with the glitterati of monsterdom, especially not with Dracula and the Monster's mate, plus to say nothing of Dr. Frankenstein's impossibly gorgeous redheaded assistant, Francesca. The hapless Felix swiftly and utterly unknowingly finds himself the target of multiple half-assed assassination attempts, but an even greater threat looms in the form of a titanic uninvited guest who seeks to wreak vengeful havoc... 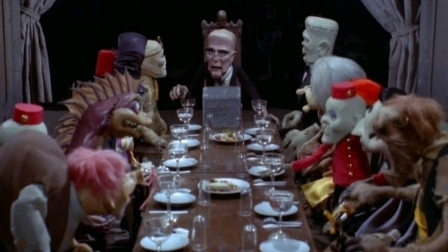 Finding appropriate fare for the wee ones around Halloween can be a bitch, since much of the scary movie material about there would be considered wholly inappropriate by most parents. (But not by uncles of my stripe, let me tell you!) That's where the magic world of Rankin/Bass Productions comes to the rescue. Renowned and beloved for their now-classic annual holiday television specials, such as RUDOLPH THE RED-NOSED REINDEER (1964), SANTA CLAUS IS COMIN' TO TOWN (1970), THE YEAR WITHOUT A SANTA CLAUS (1974, which features the fan-favorite "Heat Miser/Snow Miser" numbers), and the excellent L. Frank Baum adaptation, THE LIFE AND ADVENTURES OF SANTA CLAUS (1985), the company crafted charming and fun stop-motion animated specials and features brought to life by skilled animators in Japan, and this theatrical feature film was always a favorite and must-watch offering whenever it aired on television during the youth of those of us who are now of a certain age.

The narrative is basically a case of "What if Mad Magazine made HOUSE OF FRANKENSTEIN?"— an aspect driven home by character designs courtesy of Mad stalwart Jack Davis — with no classic monster trope left untouched and lampooned, with Dracula pretty much stealing film with his snobbish, assholish treachery. He's a riot whenever he's onscreen, and his questionable alliances come back to bite him on his pallid ass.

It should also be noted that MAD MONSTER PARTY? features Francesca, the Doctor's buxom redheaded assistant, and if ever there were an animated puppet who gave little boys their first crush, she was it And there's more to her than there seems to be upon first glance... 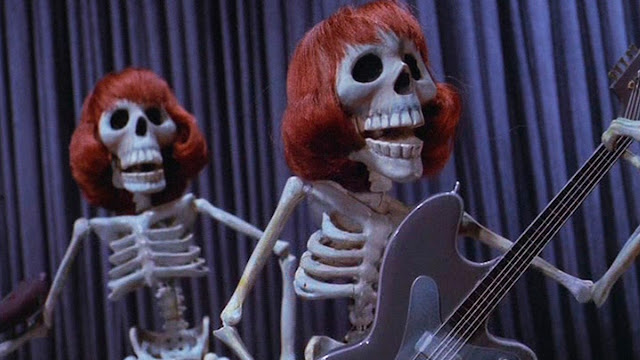 Little Tibea and the Fibulas performing "It's the Mummy."

The film also features the signature musical scoring of Maury Laws, whose brass-heavy compositions are instantly recognizable to all who grew up on Rankin/Bass' output. MAD MONSTER PARTY? is replete with memorable theme tunes for its characters and a number of great songs, including the quasi-psychedelic "It's the Mummy" (to which the Mummy and the Monster's mate rock out) and the moody, evocative title song by Ethel Ennis. "The Monster Mash" is long overdue for dethroning from its lofty position as the go-to Halloween anthem, and I herewith nominate "Mad Monster Party?" to now bear the crown. Judge for yourself:

In shirt, the family simply cannot go wrong with MAD MONSTER PARTY? and no childhood of true "monster kids" is complete without it.

HAPPY HALLOWEEN 2016, FROM THE VAULT OF BUNCHENESS!!! 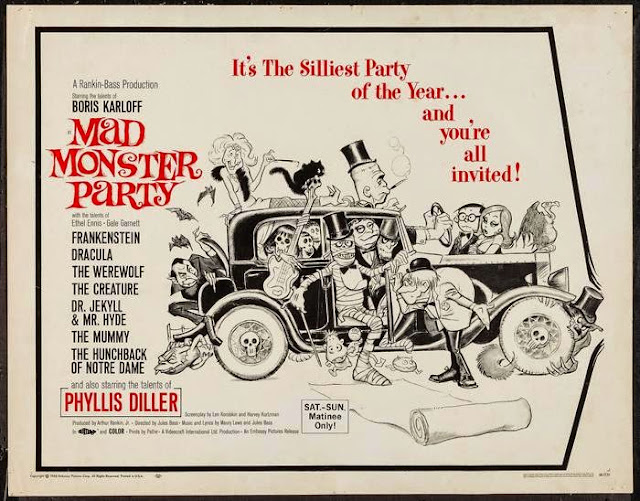