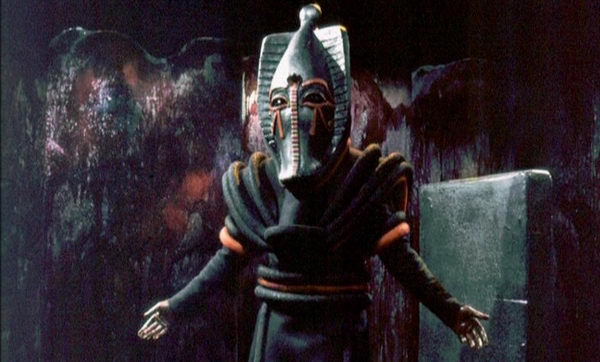 "I am Sutekh the Destroyer. Where I tread, I leave nothing but dust and darkness. I find that good."

1911: Professor Marcus Scarman (Bernard Archard) unearths the tomb of the ancient Egyptian god Sutekh the Destroyer (aka Set), which dooms him to servitude as the evil god's undead slave. Eons ago, the Egyptian gods, led by Osiris himself, waged war against Sutekh and imprisoned him on Mars, hopefully forever, in order to prevent him from wiping out all life in the universe. But now Sutekh has found a possible way out of his imprisonment and employs Scarman and a number of robot mummies to facilitate that goal, and it looks like nothing can prevent the dark deity from unleashing a swath of destruction across the whole of creation. Nothing, that is, until the Fourth Doctor (Tom Baker) and his companion, journalist Sarah Jane Smith (Elizabeth Sladen) interrupt their aimless galavanting through space and time and enter the fray. The pair of intrepid time-traveling adventurers swiftly realize that they have to intervene, lest all be lost, which they see firsthand by jumping to 1980 and finding the Earth a devastated wasteland due to their not getting involved. But how does even someone as formidable as our favorite Time Lord defeat the last of the Osirans, a being of vast cosmic power whose sole purpose is to destroy all life everywhere? 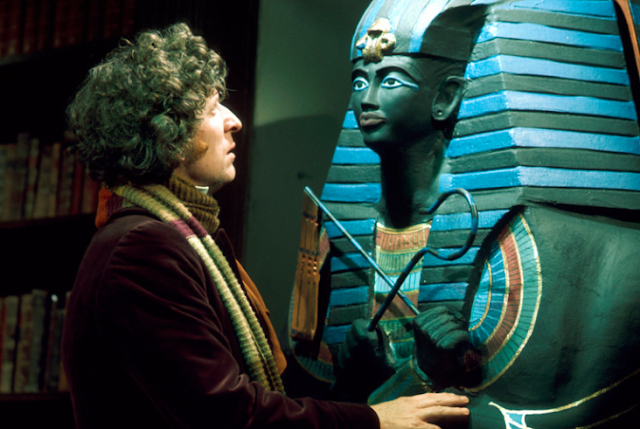 PYRAMIDS OF MARS nearly always turns up on lists and polls citing the all-time classic DOCTOR WHO stories, and deservedly so. It's a triumph of solid writing and acting overcoming all-too-obvious budgetary limitations (too put it very kindly), and it evokes the best of the often mishandled Egyptian curse/mummy sub-genre of horror. In many ways, especially when remembering that classic DOCTOR WHO was a straight-up children's program, albeit one that unabashedly brought legitimate scares, this story is the perfect entry level mummy yarn for kids. So what if the mummies are actually robots? They still shamble about and murder people, so they're doing their designated genre trope job. 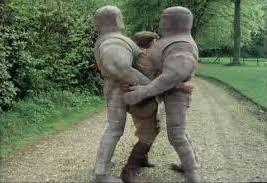 A horrible way to die: Having one's neck crushed between the pronounced chest ridges of powerful robot mummies.

The atmosphere of England in the early 1900's is perfectly evoked, as is the then-exotic flavor of recently rediscovered ancient Egyptian artifacts and culture. Speaking of which, Sutekh is one of the series' all-time greatest villains, if not the all-time greatest, in that he is a genuine cosmic entity of incalculable power whom it took and entire pantheon of gods to initially imprison, and his threat should he get loose again is on a downright Lovecraftian scale. In fact, Sutekh would have been right at home in one of H.P. Lovecraft's pulp tales of eldritch entities that drive mere mortals to states of gibbering insanity. Portrayed with unforgettable resonance and utter evil arrogance by Gabriel Woolf, Sutekh is hands down my favorite antagonist for the Doctor and I would love to see him brought back in the rebooted series (though considering how this story wraps up, that's pretty fucking unlikely). 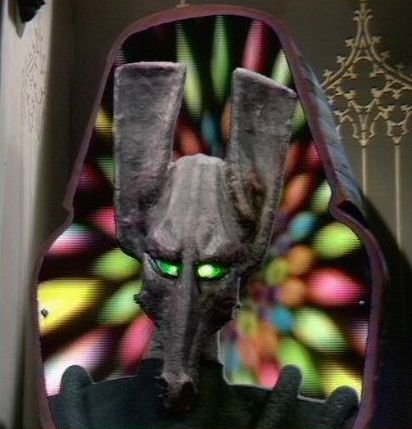 This story also allows the regulars to shine. Tom Baker's Fourth Doctor is in fine form, even behaving in ways that remind us that first and foremost he is an alien and a pragmatist, especially when forced to deal with something as universally horrific as Sutekh, so his lapses into seemingly cold-hearted handling of matters makes perfect sense. Sarah Jane, who was seldom a damsel in distress type, is given a lot to do here and comes through like the stalwart assistant that she is legendary for being. Once the seriousness of the situation is made apparent, she's right there at  the Doctor's side, showing a surfeit of pluck and good old British take charge no nonsense ass-kickery, especially when wielding an elephant gun. 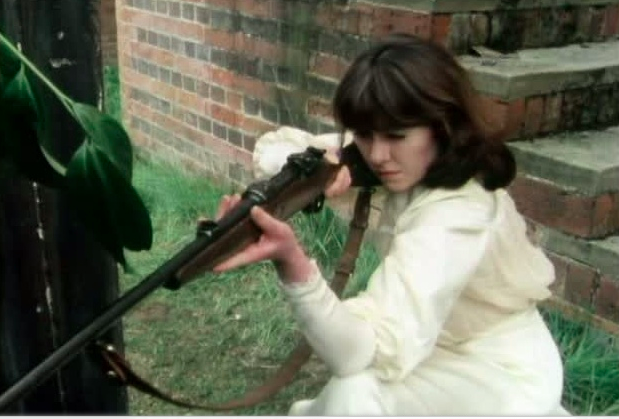 I've been a DOCTOR WHO fan since the show first hit the States in 1978, and I tuned in every week for the serialized half-hour installments with great eagerness, thanks to stories of the level of quality displayed in PYRAMIDS OF MARS. Old school WHO always treated its audience with intelligence, an attitude that's forever commendable in children's entertainment, and if I'd seen this story when I was in the single digits, I would have felt that I'd stumbled upon something very special indeed. That said, there's one caveat about this story and old school WHO in general that I should offer for the uninitiated. Pre-reboot DOCTOR WHO was a series marked by its impoverished budget and consequent dodgy special effects and sets, much of which is laughable to modern sensibilities, but that's easily overlooked if one just lets oneself go with the stories and remember that they are a product of decades ago and told with a more decompressed style of storytelling. I much prefer DOCTOR WHO in its serialized form, which allowed more time for richer characterization and the fleshing-out of stories, as opposed to the rushed done-in-one (or two) format of the current iteration. Anyway, PYRAMIDS OF MARS is a classic for several good reasons and you owe it to yourself to check it out.
Posted by Bunche (pop culture ronin) at Friday, October 28, 2016