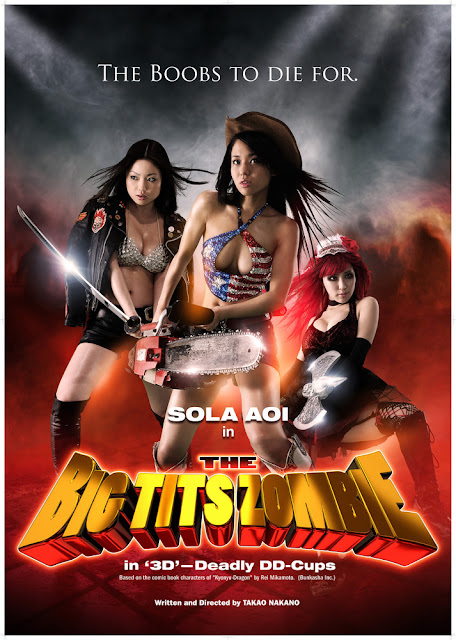 "Idiot. I've always hated you. Now I'll step on your face. With a shoe full of dog shit."
-Goth stripper Maria, once she's learned how to control the undead and decides to get revenge upon her former colleagues for no adequately explained reason.

Based on the manga series KYONYU DRAGON, this flick is another in the ongoing wave of intentionally over-the-top satirical horror/exploitation flicks to make their way to the Japanese screen, and among that lot it's rather a minor entry.

WARNING: HERE THERE BE SPOILERS.

Given an admittedly great/stupid title for its Western release, the film relates the adventures of five down-on-their-luck dancers who toil at a rinky-dink strip joint in a desolate town in the middle of nowhere. There's the recently-returned-from-Mexico sombreroed/western-themed main heroine Lena Jodo (played by adult film star "Aoi Sola," whose nom de porn translates as "Blue Sky"), morose ex-con Ginko, Goth girl Maria, Neneh, an aging dancer who reads tarot cards and is close to retiring to Tokyo to run a noodle shop, and money-hungry Vietnamese chick Darna, who's working to support her impoverished brothers and sisters, and during the film's first half hour we get to know them and see them get continually screwed over by their shady boss. 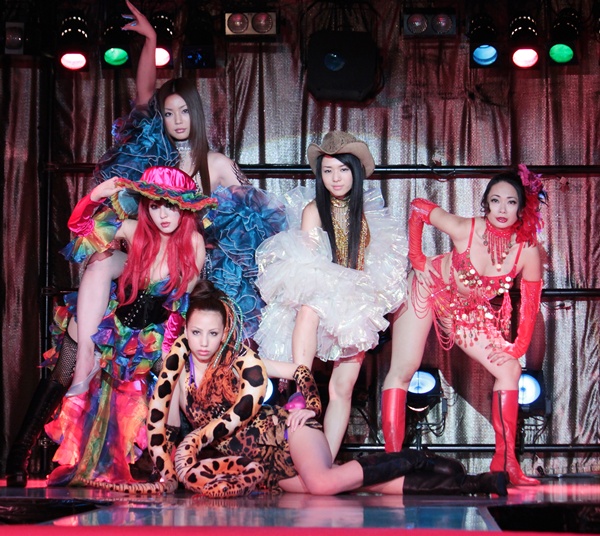 They're all fun and interesting to varying degrees, but one does not approach a film entitled BIG TITS ZOMBIE in search of a look into the crapsack lives of exploited strippers, so just as the film passes the half hour mark, the girls discover their dressing room houses a concealed door that leads into the basement of the abandoned house across the street, a place where the previous owner mysteriously committed suicide. Upon entering the basement, the girls find the dead man's creepy inner sanctum filled with arcane artifacts and an impressive collection of rare occult books, identified as such by the Goth chick (natch), who grabs an authentic copy of the Book of the Dead and of course reads aloud from it. The results are not immediate but when the spell takes effect, all hell literally breaks loose and in no time the nation is overrun by the undead from many periods of history, all of whom have escaped from the conveniently-located Well of Souls in the basement. From there it's a cavalcade of re-animated and aggressive sushi, the requisite zombie cannibalism, weaponized wasabi paste, an interesting attempted variant on the old tentacle-rape standby, beheadings, disembowelings, two of our heroines taking on a horde of zombies while wielding a samurai sword and a chainsaw and eventually ending up topless as their twins are rendered a deep shade of red as they are showered by geysers of arterial spray, and the unforgettable sight of the geisha-costumed and newly-zombified Neheh's pussy mutating into something resembling a lamprey's maw that spews fire with range and dispersal equivalent to that of a standard military flamethrower (by far the film's highlight). 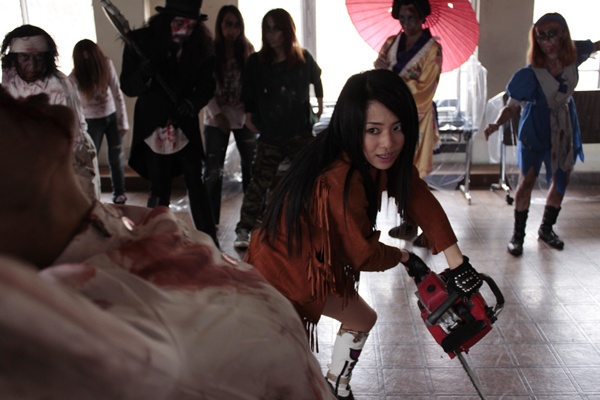 Lena takes on all comers with her handy McCullough. 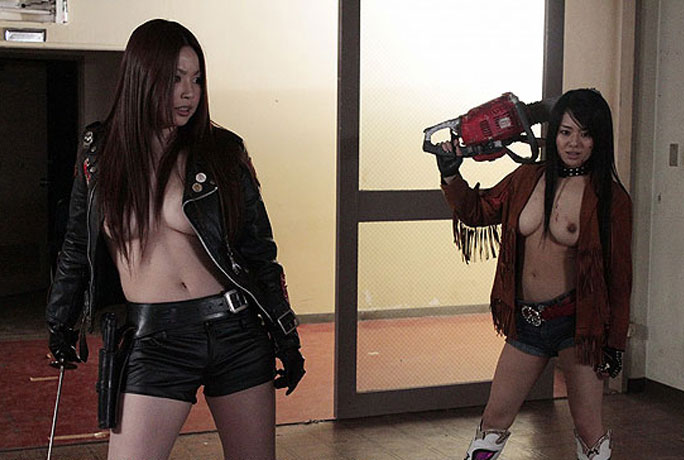 Ginko and Lena, mere moments before their twins are reddened by copious arterial spray.

All of this madness is achieved in a short running time of seventy-three minutes, so it never really gets boring (though the first half hour is definitely slow going), but with a title like BIG TITS ZOMBIE, the film contains far less nudity than one would rightly expect, and the two pairs of dairies on display — specifically Lena's and Ginko's — range from about Japanese-standard proportions to around a C-cup, so we're talking appealing, but not "big" like the title promises. (Well, not by U.S. standards, anyway.) And while the gore is plentiful when it comes, it's definitely a comparatively short blast and the movie is over well before the viewer expects it to be, so there's a profound sense of getting ripped off.

I've certainly seen far worse zombie films, but I've also seen far better in both the serious vein and the zom-com variety, so this flick is only recommended for zombie completists, those who are looking for a short diversion with gore 'n' (brief) tits, and desperate adolescent boys. However, the flamethrower pussy has to be seen to be disbelieved.
Posted by Bunche (pop culture ronin) at Wednesday, October 26, 2016

A spoiler alert? For a movie called "Big Tits Zombie"?