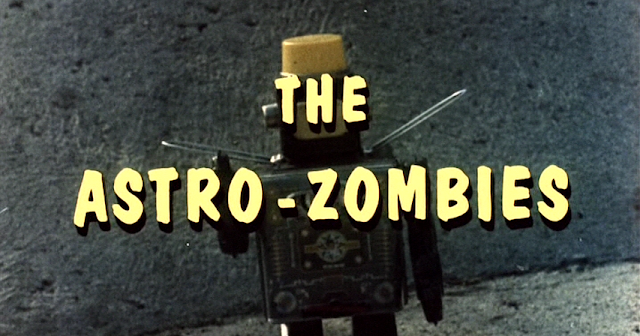 You know you're in trouble when an alleged horror movie opens with a bunch of wind-up toy robots and tanks bumping into each other as the credits lists the perpetrators.

Sometimes this whole 31 Days of Horror exercise is a real cross to bear. Every now and then my film-reviewing duties throw me under the bus that is a truly bad movie, and I write this while healing from injuries sustained upon being flattened by THE ASTRO-ZOMBIES.

After getting the axe from the space agency, scientist John Carradine crafts bootleg "astro-men" from plans stolen from a colleague. Intended for space exploration, the astro-men are remote-controlled human/machine hybrids whose human components are culled from murdered civilians or car accident victims, and for no apparent reason (or maybe I was so bored that I missed the explanation) they occasionally escape from the scientist's lab and embark on a mindless murder spree. 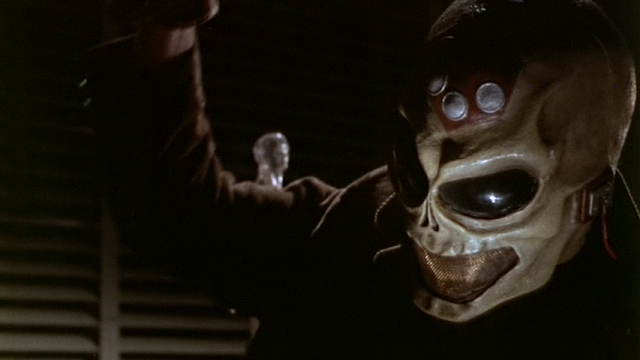 One of the titular creatures goes to work.

While the space agency lugubriously investigates the murders, they also become aware that a spy ring  headed by big-titted cult icon Tura Satana (FASTER, PUSSYCAT! KILL! KILL!) seeks to obtain the plans to the astro-men and sell them to a foreign government. What ensues can barely be called a horror movie and instead drags us into the mire of late-1960's feeble would-be James Bondian espionage nonsense. Seriously, perhaps a fifth of the film is straight-up horror and the rest would not pass muster as a below-average third season episode of THE MAN FROM U.N.C.L.E. 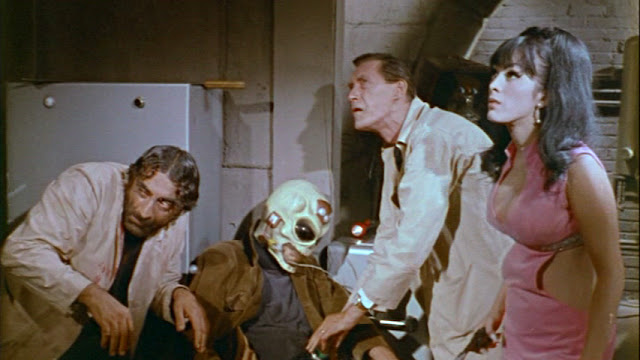 Characters search in vain for a decent script.

THE ASTRO-ZOMBIES features the sort of plot that would be ideal for introducing kids to the genre but its emphasis on the spy angle while claiming a pure horror pedigree fucks it right in the ass,  but the movie's cardinal sin is that it is incredibly boring. Loaded with un-involving secret agent shenanigans, long shots in the lab in which the camera stays rooted to the spot while nothing of interest happens, John Carradine spouting endless streams of meaningless techno-babble, and a marked paucity of scary mayhem, the film is an endurance test for even the most die-hard of bad horror movie masochists. 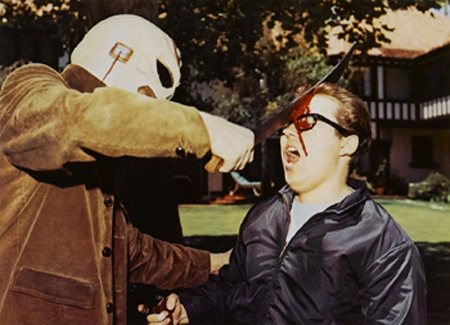 What I wish had happened to me instead of sitting through this turd.

Despite having a memorable title and having been co-written and co-produced by Wayne Rogers, aka "Trapper" John McIntyre from the television version of M.A.S.H., about the only good thing to come out of this film is that it inspired one of the Misfits' signature tunes.

Director Ted V. Mikels was a master of low-budget schlock, some of which was could be entertaining, such as GIRL IN GOLD BOOTS (1968), CHILDREN SHOULDN'T PLAY WITH DEAD THINGS and the THE DOLL SQUAD (both from 1973), but THE ASTRO-ZOMBIES is the cinematic equivalent to being forced to stare at a dead cat for 91 minutes. Life's just too short. 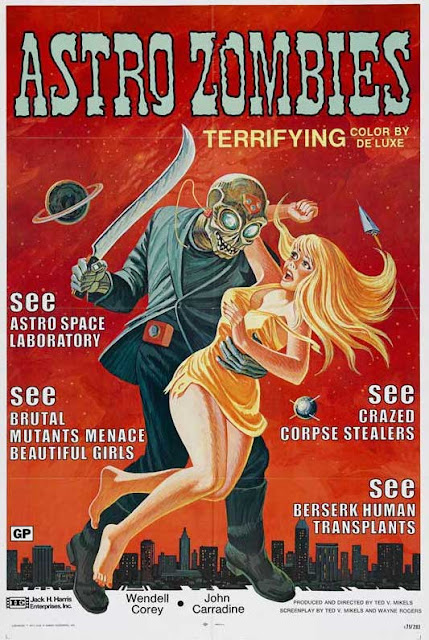