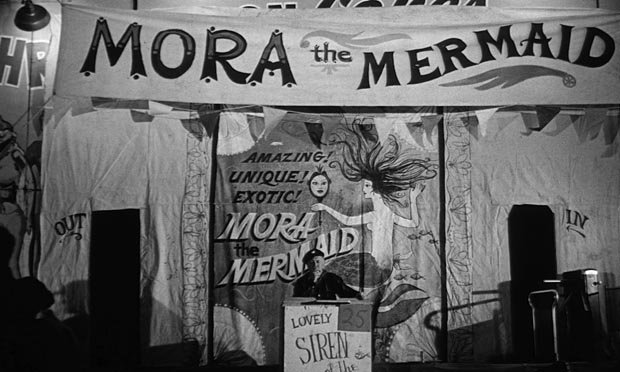 While on shore leave, young sailor Johnny Drake (an impossibly youthful Dennis Hopper) cruises the Coney Island-esque boardwalk of Venice, California and meets Mora (Linda Lawson), an eerie beauty who works as the boardwalk's phony mermaid. Johnny somehow wins her over by acting like a creepy, aggressive stalker and in no time the two are a committed couple. But as the two grow closer, Johnny learns more about his exotic lover, such as the fact that she was raised by Captain Murdock (Gavin Muir), who found her on a remote Greek island when she was a child, and that she believes she is a mythological siren akin to those encountered by Ulysses. But the big red flag is that Mora's two previous boyfriends died mysterious deaths and it appears that Mora is responsible. And while it seems that Johnny is next in line for the chop, there's also a creepy foreign woman who occasionally appears to stalk Mora and who may be the leader of the mermaids/sirens... 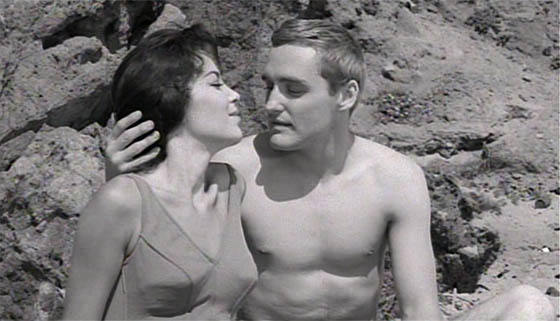 The young lovers, before things get weird.

I'm going to be totally honest with you, dear readers. I wanted to see NIGHT TIDE since first hearing about it during junior high, mostly because I'm a huge fan of Dennis Hopper but also because of my love of mythological creatures, which Mora allegedly is. I only recently got my hands on the film and when I finally sat through it, I was heartbroken to find out that it's one of those flicks that goes out of its way to convince you that it's a straight-up horror film when it really isn't. If anything, NIGHT TIDE can be considered a "thriller," but even when presented as such it's a rather tepid affair despite its considerable atmosphere. The narrative builds Mora's strangeness from the moment we first meet her, only to have all of the supernatural potential flushed straight down the toilet during the exposition dump that serves as the story's ending. 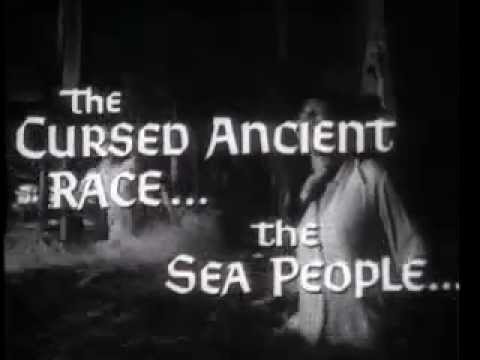 While not at all a bad movie, though admittedly a very low key slow burn, NIGHT TIDE hit me as a huge disappointment, so I'm writing about it as a public service to spare curious horror and Hopper fans sitting through what amounts to a case of bait and switch. The only real reason to see this film is to see a 25-year-old Dennis Hopper acting completely normal. (Stalker behavior in the early portion of the film notwithstanding.) Bottom line: NIGHT TIDE would have been right at home as a lesser entry on the old THRILLER television series, but it does not pass muster as a feature-length supposed horror movie. Caveat emptor. 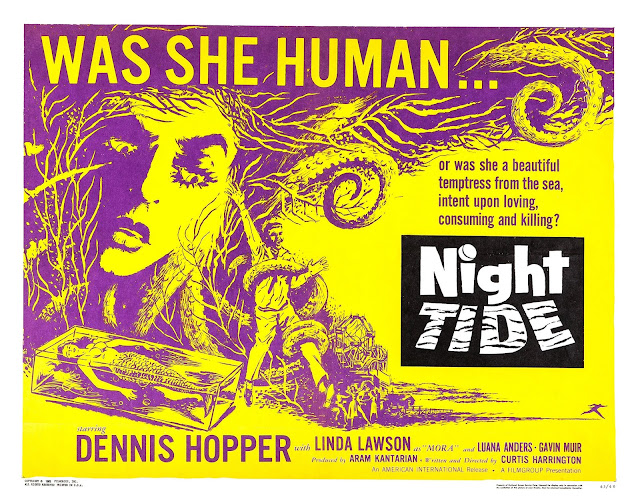