In an odd twist of cinematic fate, 2008, the year when the movie version of TWILIGHT hit,  also saw the release of LET THE RIGHT ONE IN, a Swedish take on the “boy meets girl and one of them is a vampire” chaste love story thing, but that film could not be more different from TWILIGHT if it tried to. Whereas TWILIGHT strove to be a pop confection for tweens that worked within the conventions of the relatively family-friendly high school narrative genre, although with fantastic elements thrown into the mix, LET THE RIGHT ONE IN (also based on a novel) is immeasurably more bleak and examines a bond born of desolate loneliness rather than gazing-out-the-window dreaminess.

Taking place near Stockholm in 1982, the story revolves around the relationship between twelve-year-old Oskar (Kare Hedebrant), a quiet and rather solitary boy who is tormented by some cruel schoolmates in an escalating wave of sadistic bullying, and the mysterious Eli (Lina Leandersson), a sad-eyed girl who moves into the apartment next to where Oskar lives. Noting her arrival in the middle of the night with a man we’re meant to think is her dad, Oskar sees the girl move in and notices that Eli’s windows are immediately blocked with cardboard to prevent the sunlight shining in (not-so-subtle clue Number One). The two adolescents meet one dark, frigid night as Oskar sits in his apartment complex’s sparse playground and Eli shows up in attire more appropriate for a spring day rather than the kind of gear necessary for survival in snowbound Sweden. That’s unusual enough, but Eli also displays a physical nimbleness that’s not quite normal, a trait that does not go unnoticed by Oskar, but he doesn’t care so long as he has someone his age to talk to. 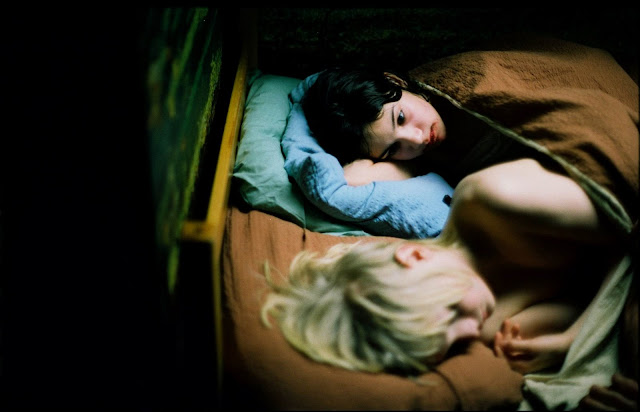 When the unnatural collides with soul-deep loneliness.


As soon as Eli moves in, murders begin in which the victims are drained of their blood, first by what looks to be a serial killer and later some kind of wild animal, but it soon becomes apparent that Eli is a vampire and Oskar is at first kind of shocked by that discovery. But he has come to know and care for the sad-eyed girl, valuing her friendship over his understandable fear of her feeding habits. Several complications arise during all of this, but chief among them is the fallout once Oskar heeds Eli’s advice and violently fights back against the leader of his tormentors, an act that snowballs to a conclusion that would have been horrifying even without the presence of a vampire…

LET THE RIGHT ONE IN is less of a horror story than an examination of how two lonely souls find each other in the middle of a literal wasteland, and the two young stars could not have been better cast. Neither kid is a fantasy glamour figure a la a film made here in the States, both looking as ordinary and awkward as kids their age should be, and that factor helps sell the believability of the narrative. While Oskar clearly has feelings for Eli, he is perfectly happy to be with her in a non-sexual way because the connection he experiences with her goes beyond the merely hormonal; it’s a meeting of hearts and minds that is deeply affecting and genuine, unlike anything I saw in TWILIGHT, and the film’s icy location and deliberately slow pacing punctuate the “life” embodied in the relationship of the two kids. Though physically twelve, Eli has been twelve “for a long time,” and the film makes it clear that her un-life has been one long stretch of misery and isolation, constantly moving so she won’t be discovered, so when she befriends Oskar despite her own declaration that it would best for both of them if they were not friends, it has real meaning, and while Eli had her own needs, if ever there was someone who needed a friend, it was Oskar.

One item of particular note is a sequence where Oskar sees Eli changing clothes and catches a brief and innocent glimpse of her crotch, but when I saw the scene I said to myself, “What the hell was that? Is that scarring?” Thanks to the magic of the DVD player’s remote I was able to freeze-frame the shot and given a severe case of the crawlies when I saw clearly that Eli’s female bits appeared to have been mutilated and long healed-over, but no explanation was forthcoming. I did some research and found that in the source novel at some time in the past Eli was the victim of a particularly nasty vampire lord who delighted in cruelty such as manually emasculating young boys… You do the math. That bit of information added a whole new element of tragedy to her story and I wonder why the filmmakers decided to leave it out. Perhaps they not incorrectly assumed a mutilated pubescent pubic area was bad enough and just left it at that… Whatever the case, I’m now interested in reading the book to see what else was excised or changed for the screen.

LET THE RIGHT ONE IN is and excellent film but don’t buy all the review quotes about it being “one of the essential vampire movies” or “one of the best horror films ever made.” As previously stated, the film is more of a character study than anything else and as such it’s great. However, there are no scares to speak of, at least not in the sense that American audiences expect, and the gore is tastefully minimal, being almost totally related to Eli’s feeding, so don’t even think about recommending this to any gorehounds you may know. Well, maybe you should, provided they’re willing to give a chance to a “horror” film that’s all about the slow-paced story allowing the viewer to get to know its characters. BOTTOM LINE: if you're going to choose one of the similarly-themed 2008-releasse suckface romances, go with the Swedish one. 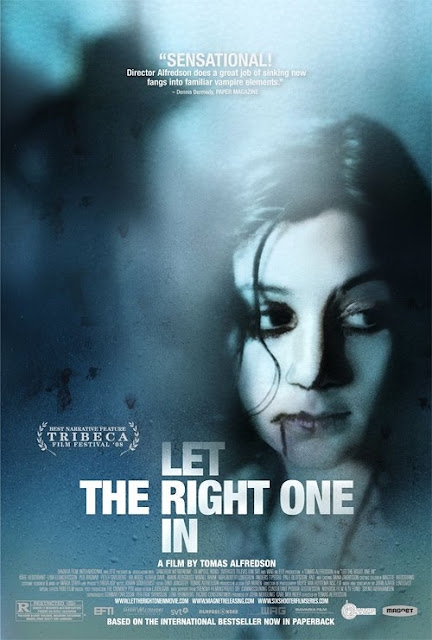 The American version was pretty good too.