Here's where this site finally does the world a public service. Despite all you may have heard about the infamous CALIGULA, I'm here to tell you that's it's an overblown testament to across-the-board excess, turgidly dull, and certainly not worth the waste of two-and-a-half hours of your life. It even stars my favorite actor, Malcolm (A CLOCKWORK ORANGE) McDowell, and I still can't stand it! I mean, how do you make a movie so absolutely loaded to the gills with extremely graphic gore and hardcore sex, two elements I adore, and still have it turn out so fucking boring?

The film has no real story — no surprise since the script was penned by that pretentious and overrated A-hole Gore (MYRA BRECKENRIDGE) Vidal — and is just an escalating parade of explicit images that seek to titillate the viewer, and as such it could be considered a success, provided you're just looking for entrails and pussy, but the whole in-your-face experience is simply numbing after its all-too-generous running time. The film also famously roped a slew of A-list thesps to appear in what was originally to be an R-rated look at the mad emperor's rule and eventual assassination, but then money man Bob "Penthouse" Guccione, aided by his pal Giancarlo Lui, shot and inserted majorly-explicit sex stuff while the film was in post-production that pissed off many of the cast and alienated many critics, to say nothing of presumably annoying the piss out of the porno audience who wanted to see just the wet shots with no attempt at anything else. I've seen porn audiences who don't care if a given skin flick is shot in a moldy basement while the talent fuck on a stained mattress just as long as there's action, which CALIGULA certainly has, but it's trying to be way too highbrow while also striving to appeal to the trenchcoat brigade, and that's a recipe that just doesn't work.

The only positive things I have to say about the film are few, but they are strong draws to the curious, so let me break it down for you: 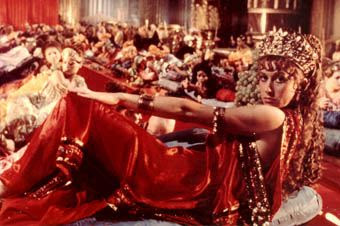 Not that she's ever been shy, but I'm just saying. She even has a three-way with Caligula and his sister (that's Helen with the long-assed wig.) 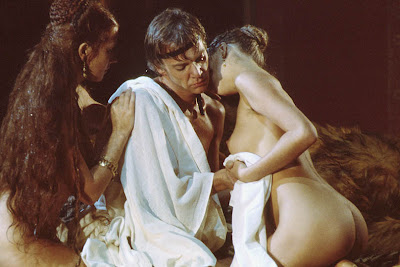 However, I'm only noting that scene because it exists, not because it's all that hot. 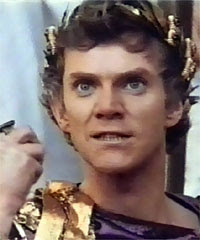 But the one thing, — THE ONE THING!!! — that keeps CALIGULA in my DVD collection is the contribution of Lori Wagner and Anneka di Lorenzo, two lovelies who are featured as regulars in Cal's live-in entourage. These benevolent goddesses make the entire film worth sitting through thanks to what is, in my humble opinion, the greatest hardcore lesbian scene ever committed to celluloid. 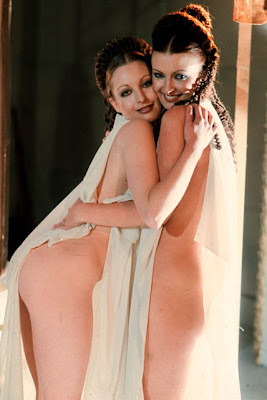 Lori and Anneka, sittin' in a tree...
Their scene is interspersed as counterpoint with the aforementioned three-way and in every way their bedroom arabesque blows the competition out of the water. Incredibly sensual, tender, and downright steamy, the sequence is commanded by Anneka di Lorenzo, who claims in the unimaginably boring making-of documentary to have never previously had sex with another woman... Well, all I have to say to that claim is, "Yeah, RIGHT!" The girl eats clam like a goddamned sea otter and it's truly a joy to behold. I usually find lesbian scenes, even the hardcore ones, boring as shit, but this sequence is an exception of unparalleled magnitude. 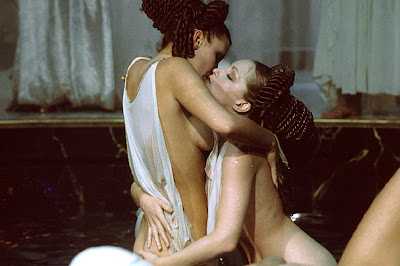 So now you know all you need to know about CALIGULA, and you can proceed at your own risk. But I'm tellin' ya, that lesbian scene...WOOF!!! 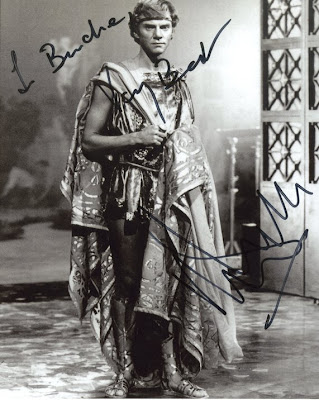 Labels: FLICK YOU, THE MAGIC OF PORNOGRAPHY

At some point, I fully intend to write (and maybe draw) the definitive comic adaptation of this story. It's truly hilarious and bizarre.

Funny that you should have reviewed Caligula lately. Spent some time at the bar during my 3 day bender this weekend with Pauly (you know Pauly)... he was giving me his own review of this movie, which went like this. "Gar, man that was some fucked up shit... I had to watch the fucking thing twice!!!".

I'm like, "Thanks, Pauly, thank you. You had to watch the fucking thing twice. Great."