As the never-ending sorting out of the Vault continues, I often find items I'd forgotten I even had, and the other day I found a stack of about five of those marbled composition notebooks that I kept on hand during my time at the barbecue joint. I used those cheap-but-sturdy books to jot down notes to myself, ideas for stories and blog posts, phone numbers provided by eager and smashed female patrons (never used), and assorted crap. And every now and then some regular would get totally fucking hammered, demand to borrow my notebook, and begin to scrawl rambling, nonsensical doggerel or obviously drunken cartoons, and I always allowed them to do it because I always got something crazy out of the deal.

An exceptional example of this phenomenon was a very cute, artsy blonde (whose name eludes me at the moment) who used to come around fairly often, get plastered with her friends, accent the booze with a bit of "snot carpeting" (if you know what I mean) and then return for more booze and throw herself at any available men-folk within range. This probably sounds a lot better than it really was because when she got wasted she was very annoying and way too aggressive in all respects, an effect that cancelled out her considerable looks. (Aaah, she was too model/waif-skinny for my preferred aesthetic anyway, so I have nothing to bitch about in that department.)

Anyway, one night she came into the barbecue joint in exactly the state I just described and I was sitting at the bar after just finishing a particularly exhausting shift when she sat down next to me and attempted to turn on the charm, and I did my best to ignore her by opening up my marbled notebook and jotting down possible post ideas for this blog. Undeterred, she persisted in annoying me in a way that only drunk and coked-up chicks can, so I closed my book and retreated to the theoretically sacrosanct confines of the kitchen. As I sat in my folding chair, the kitchen atmospherically illuminated by the sole bulb found uder the hood fan, Cokey McSnortface followed me into the kitchen, determined to force my undivided attention.

I rolled my eyes ceilingward as she sidled up next to me and nearly lost her balance while attempting to sit on the now-cooled edge of the industrial stove, then "sexily" said, "You know, you and I should team up on an art project." Sensing the simmering, cocaine-fueled insanity about to happen, I played along and asked her what she meant. "You know, something for the people." "Okay," said your favorite Bunche, "But exactly what do you mean?" Her head then tilted to an angle that made her look like she'd just been rescued from the gallows and her eyes widened, then narrowed, like a predator sizing up its quarry. It was at that point when I heard the crazy carnival music begin to play and she tore the pen and notebook away from me and began frantically scribbling down notes, apparently for me to use in the creation of the proposed work.

When she had finished, she practically threw the notebook back at me and when I opened it I gazed at her notes. Before I could say anything, she began to jab at the notebook with my pen — narrowly avoiding my balls, I might add — by way of punctuating her loud reading of what she'd scrawled. "IT'S GONNA BE FOR THE WORKERS! FOR THE UNITED STATES OF AMERICA! FOR THE ARTISTS! FOR NEW YORK! FOR THE CHILDREN! FOR THE WOMEN! FOR THE INDEPENDENT THINKERS! FOR ALL THE GROUPS THAT ARE HERE FOR GOOD REASONS!" she shrieked, her pitch escalating like that of some fire-and-brimstone preacher out to scare my beige ass off the path of booze and strangeness and straight into Jesus' greased-up bath house. "THAT'S WHAT IT'S ALL ABOUT, MAN!!!" 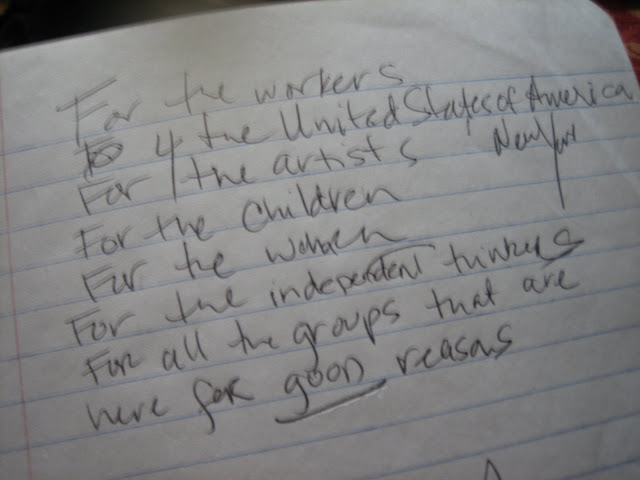 An artistic manifesto for the common man.

She then stood for a few seconds, hyperventilating like she'd just run a marathon, awaiting my jolted-up-the-ass signing on for her undefined crusade, a covenant that would be sealed with an act of wanton, on-the-kitchen-floor fucksmanship. But when I instead asked for anything resembling coherent clarification of her intent, she once more ripped the notebook from my lap and began to illustrate her proposed piece for the everyman. When she finished, she held it up for me to see, so I looked at it. 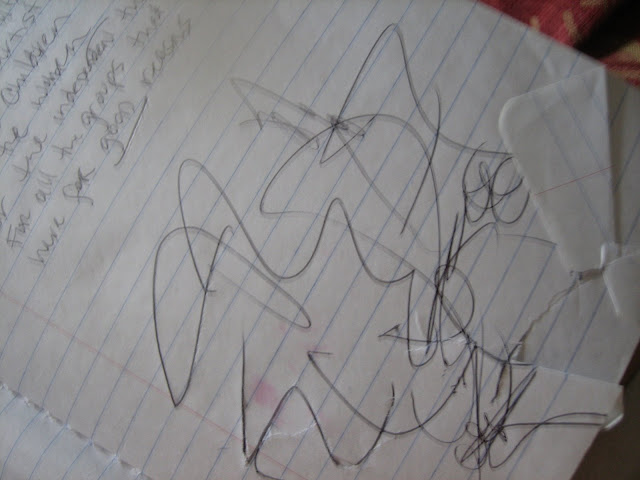 The schematic for the proposed collaborative art project.

Exasperated, I asked her, "Seriously, what the fuck is this supposed to be?" Well, I shouldn't have done that, because she then threw the notebook at my head with all her might and as I managed to dodge the the damned thing it bounced off the wall and hit the floor, tearing the page with her invaluable schematic on it. "YOU'RE A FUCKING ASSHOLE! A MOTHERFUCKING ASSHOLE!!!" she cried, and she fled the kitchen, grabbed her purse from her seat at the bar and ran cursing into the Brooklyn night.

I didn't see her again for nearly a year and when I saw her again she was much more in control of herself, not appearing to be coked-up in the least. She tried to chat me up and in no time flat it became apparent to me that she didn't remember who I was.

What?!! You say you don't know what that means? Sheesh! It is so obvious!
You just don't appreciate good Art!

That's like some shit you see while playing Resident Evil. "You've have taken the insane lab worker's notes."