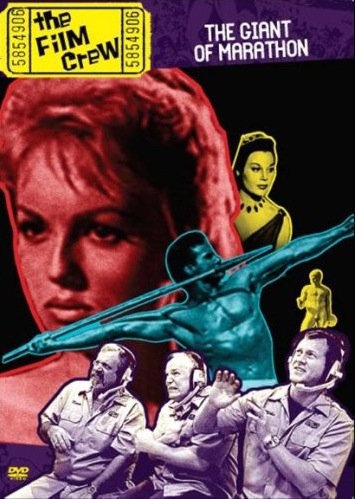 The Film Crew are back with this fourth release, a snarky commentary version of the 1959 Italian swords-and-sandals outing THE GIANT OF MARATHON, a film featuring early camerawork by a young Mario Bava and directed by Jaques Tourneur, the guy who made CAT PEOPLE (1942) and I WALKED WITH A ZOMBIE (1943). 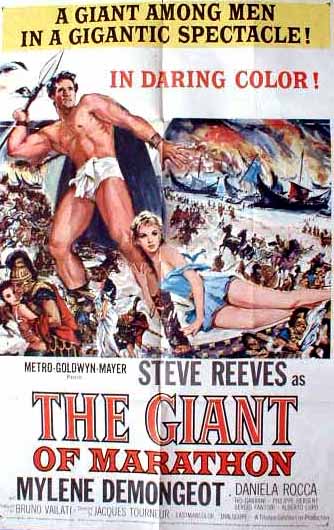 Starring the man whose name was virtually synonymous with the entire "peplum" genre, Steve "Hercules" Reeves, this is a fairly pedestrian example of the muscleman epic and is rather of dull since it takes itself way too seriously. THE GIANT OF MARATHON offers none of the usual Greek mythology fun found in these films, opting for bland intrigue when the fans of this stuff (like me) want to see heroes defying bogus-looking monsters or getting fucked with by the gods. If you're after that kind of stuff, then you're shit outta luck with this one and would do better with either of Reeves' first two Hercules flicks, the first two of which were done with hilarious results on the late, lamented MYSTERY SCIENCE THEATER 3000. 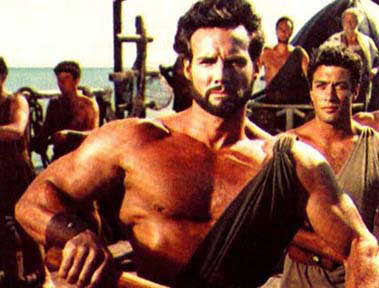 That said, you'd think the aforementioned deficiencies would lend themselves to the abuse perpetrated by the guys in The Film Crew, but the film's dullness even fails to get the commentators firing on all cylinders. When judged against the cinematic back-talk magic they worked on MYSTERY SCIENCE THEATER 3000, the Film Crew's direct-to-DVD efforts stand as mildly amusing at best (KILLERS FROM SPACE) or a flat-out waste of your time (WILD WOMEN OF WONGO), and considering that we have to buy these DVDs rather than getting them for free on cable, that really sucks. Supposedly the first four releases in the series were chosen by an internet poll, and if this is what such polling yields I'd suggest that the Film Crew use their own judgment and pick bad movies that really give them material that they can do something with. I applaud them for wanting to get the fans involved, but in this case fan input is a major hindrance to the boys getting down to the business of quality lambasting.

Still, THE GIANT OF MARATHON isn't a total loss. There are some very funny bits skewering the wall-to-wall homoerotic content of films in the genre — the second I read that they were doing this film I knew there'd be tons of gay jokes; if you've ever seen a peplum flick, you probably realized the women who appeared in them were there pretty much as the cinematic equivalent of a "beard" — and while the guys make fun of the rampaging gayness, they are never homophobic or out to gay bash, so get that out of your head right now. And how could they not have something to say about a film that is loaded with body hair-free, oiled-up guys in ultra-short skirts and diapers who look like this: 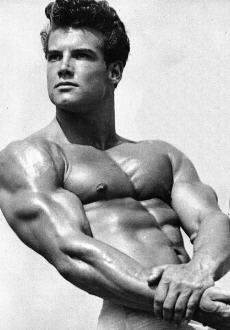 So I'd recommend this one only for MST3K diehards or those who are in the mood to see an ancient world "epic" get the business. All others are to proceed with caution and rental is acceptable, but not an actual purchase. 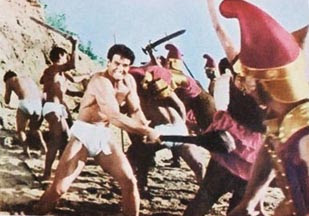 It Dudes in Diapers versus the Resevoir Tips in a blistering baby oil throwdown!!!
Posted by Bunche (pop culture ronin) at Tuesday, October 09, 2007