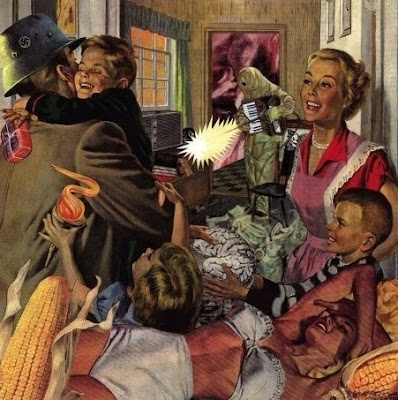 Tucson, Arizona’s Fish Karma can best be described as one of the worst vocalists ever to have the gall to step in front of a mic, his voice falling somewhere between Neil Young after a swift boot to the naughty bits and the dying screech of a depleted air horn, yet his unique style fit perfectly with his role as a humorous yet often trenchant folkie. His albums TEDDY IN THE SKY WITH MAGNETS (1991) and SUNNYSLOPE (1993) are real head-scratchers until you get past his overwrought whine and actually listen to the lyrics, then once you’ve finished simultaneously laughing your ass off at his hilarious songs and agreeing with the observations made, you may just find yourself with a new artist to treasure. Unfortunately, Fish Karma — real name Terry Owen — appears to concentrate on his live performances, leaving his album releases rather sporadic at best, and this most recent offering is a very odd duck indeed, focusing as it does on a mostly metal/thrash sound. 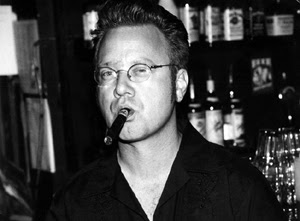 Fish Karma.
You’ve got to hand it to the guy for experimenting outside his own unique corner of the folk realm, but the attempted gene-splicing of Karma’s signature intelligent snarkiness with balls-out shredding is a schizophrenic hodgepodge with very few high spots. Songs like the “Cuckold’s Horns,” “Nausea #2,” “Dio Rocks,” and “I Begged God To Kill Me” each bear the mark of his clever, biting, and somewhat silly lyrics and do rock hard, but after about a minute into each tune the listener’s inner voice says, “Okay, I get where this is going,” and sometimes it’s best to listen to that inner voice and move on.

The album isn’t a total loss, however, due to the terrific anti-Bush/fundamentalists “Fifty Caliber Christ,” and “Raunched!” in which a guy gives us the mundane yet lousy chronicle of his life from birth to death, a litany of complaints that proves he did indeed get “raunched,” but two excellent tracks don’t necessarily justify shelling out one’s hard earned cash for mediocrity while there are still albums by Mercyful Fate that you haven’t bought yet.

It might be worth forking over your 18 bucks just for that cover.
A tad busy, perhaps, yet oddly fascinating.

I'm so proud to be the one who introduced you to the fish phenom. Nice timing too--I think there's a show at Club Congress this weekend. Since I'll be in Tucson, I promise digital pics of the performance.