HALLOWEEN'S AROUND THE CORNER — ARE YOU READY?

So it's a little over a week until Halloween, and I'm ready to rock with my bitchin' outfit. How about you? If you aren't, then get off your AMERICAN IDOL-watching ass and get it in gear! Halloween's the one night of the year when we all get to be something...other, and if you're in the right city there's a shitload of crazy stuff to see and do on the weekend before the big day, as well as on the big day itself.

If you're lucky enough to live here in NYC, there's the truly epic Halloween parade, and while that's fun it does tend to get SOYLENT GREEN-level crowded. so after you check it out for as long as you can stand, head on over to Christopher street and witness a living, breathing hallucination. You never know what you might encounter, such as this excellent Dalek (photographed by Sanford Santacroce), a malevolent space alien that I'm sure the majority of parade goers could not identify: 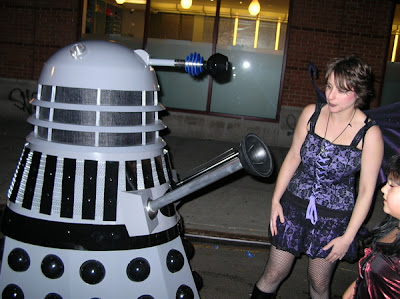 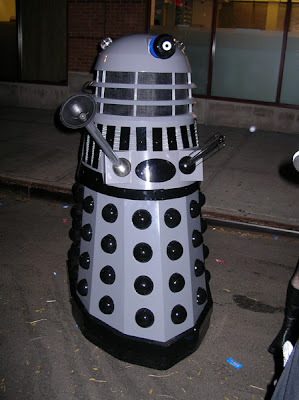 The Dalek's are to DOCTOR WHO what the Borg are to STAR TREK: THE NEXT GENERATION, in case you didn't know.

Anyway, suit up and hit the streets, and feel free to send in your own Halloween pics. And don't worry, you will be credited!
Posted by Bunche (pop culture ronin) at Sunday, October 21, 2007

Great comparison for the unenlightened, although it's more like the other way around. The Borg are the Daleks of Star Trek TNG. :)

Isn't it funny how fan-made costumes often look better up close than the real costumes from the show or movie? Here in Seattle, there's an awesome musieum filled with costumes from various SF films and shows. Almost all of 'em look like shit up close. A fan wearing one would get laughed out of the convention. Ah, the wonders of lighting, context and cinematography!

Fear not, our costumes will be epic, and heavily documented!

You are 100% absolutely right, and I can't believe I listed them in that order...