There are only a handful of movies that I wish I could have seen in the theater on opening night with absolutely zero knowledge about the flick’s content, and THE STREET FIGHTER is right around the top of the list. Just the other day I realized how often I mention THE STREET FIGHTER, either in passing or in a capsule recommendation, but had never gotten around to actually giving it the in-depth coverage that a sleazy, ultra-violent exploitationer/chopsocky opus of its caliber deserves. Well, I’m correcting that grievous oversight right now, muthafukkas!

When the Bruce Lee classic ENTER THE DRAGON went on to kick international box office ass in 1973 it was only a matter of time until someone stepped up to the plate with an attempt to outdo its badass mojo and those masters of the cinematic cash-in, the Japanese, were more than up to the challenge. They had my man Sonny Chiba for the lead — he’d been kicking around (no pun intended) in movies and TV since the early 1960’s but had yet to make a splash outside of Japan — and the one thing that ENTER THE DRAGON had overlooked, namely a plot, so along with the Japanese propensity for outrageous and savagely graphic violence, GEKITOSTU! SATSUJIN KEN (roughly translated as SUDDEN ATTACK! THE KILLING FIST) had all the pieces in place to be a winner across the board. 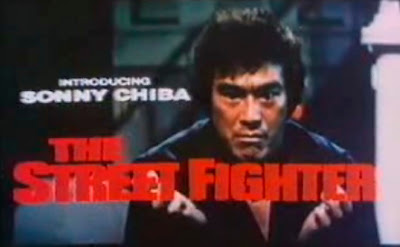 My original intent in coming up with a post about THE STREET FIGHTER was to give it a detailed synopsis and explanation of what made it great, but while writing the piece I felt it was a little too long and over-analyzed what is essentially a kickass exploitation film that was created solely to thrill those who enjoy shitloads of karate and gory violence. In an attempt to rethink my approach I checked out a few of the many online reviews on the film, and I soon realized that I was writing pretty much the same review that had been done a million times, namely an article obviously written by someone who loves the movie but more often than not fails to communicate its over-the-top visceral appeal, so instead of boring the shit out of you I'll simply state that THE STREET FIGHTER was the first film to receive an X rating for violence when it was released in the States, and considering how crazy some American flicks got at the time that's quite an achievement. If you're looking for a review that best sums up everything you need by way of plot details, check out the review found at Cold Fusion Video, and once you've read that please return here for a photographic tour of THE STREET FIGHTER's outrageous highlights.

(BRIEF PAUSE TO ALLOW YOU TO READ THE LINKED REVIEW)

So now you've read the plot, and here's the good shit!

The film was a product of Toei Studios, a company that gave the world a buttload of ultra-violent Yakuza movies and martial arts flicks, so if you ever see the company's logo superimposed over those familiar crashing waves, prepare yourself for a film that in no way resembles one of those Merchant Ivory tamponathons.

The Toei logo: a welcome harbinger of graphic violence and mayhem!
The flick opens with a karate fight in a jail cell, freeze-frames on a guy getting punched in the guts, and then the title drops in to punctuate the violence.

That's cool, but I like the Japanese version better, where the title looks like it was written with splattered blood:

The protagonist — he sure as shit isn't a hero by any stretch of the imagination! — in all of this is Terry Tsurugi (Sonny Chiba), a freelance badass-for-hire who has no redeeming qualities other than his belief in adherence to a certain code of honor, and if you cross him you are majorly fucked.

The one and only Sonny Chiba as Terry Tsurugi, one of the all-time toughest and meanest protagonists in martial arts movie history.

For example, after breaking a condemned murderer named Junjo out of prison and getting him out of the country, Tsurugi discovers that Junjo's younger brother and sister can't pay the rest of his fee. Irritated by this, Tsurugi blithely announces that he'll get his money by turning the sister into a prostitute. That understandably does not go over well, so the brother and sister make a vain attempt at kicking Tsurugi’s ass (they’re both versed in karate, but their fighting skills amount to the equivalent of an ant trying to ass-fuck a bull elephant); the sister gets knocked out of the way and Tsurugi rummages around in the brother's eye socket after kicking the shit out of him.

How bad would this suck, right? The brother then makes a go-for-broke flying kick that Tsurugi easily eludes, but unfortunately the brother flies out the window and plunges about thirty stories to a splattery death on the sidewalk.

NOTE: remember, kiddies, this is the Karate Universe, so the police never show up, no one inquires about a guy’s body — now a leather-jacketed dropped pizza with a face — and the poor sister is deposited into the hands of slavers who try to “break her in,” if you know what I mean, but when she proves to much too to handle they shoot her up with heroin, turn her into an addict, and sell her into sexual slavery. A Disney movie this ain’t.

The next bit of totally gratuitous sadism involves Tsurugi massacring about fifteen punks,

and bashing out a Yakuza thug's teeth with one sock to the mouth (NOTE: I didn't include a shot of that because it basically looks like exactly what it is, namely a guy spitting out a mouthful of candy corn and Hawaiian Punch). Following that we're treated to a classic moment in the history of Badass Cinema: Tsurugi beats the shit out of two Yakuza killers, and as one flails about screaming in the mud while clutching a broken arm, Tsurugi dispatches the other one to Meifumado — the Japanese version of Hell — by leaping into the air and landing a lethal blow to the top of the guy's skull, a punch that at the moment of impact is accompanied by a sickening "CRUNCH!!!" and seen in X-ray.

The scene then switches back from the X-ray effect and we see the Yakuza instantly go brain-dead, spewing a gout of blood from his gob.

The action gets even more delirious when Tsurugi takes on a hulking opponent who's too bulky to be affected by his usual bashing and kicking. So what's a badass to do? How about poke the motherfucker's eyeballs out? That's what!

So there's this heiress that Tsurugi's supposed to be bodyguarding, but he's not too good at it since she gets kidnapped by the same pricks he sold Junjo's sister to, and while she's their captive the sole black guy in the movie is of course compelled to rape her.

Getting his shit together for once, Tsurugi arrives just as the would-be rapist is about to slip the heiress a length of blacksnake, dives through the window,

grabs the bastard by his junk,

and leaves the guy to unceremoniously bleed out on the floor.

Sadly, Tsurugi's rescue attempt fails and the heiress is again kidnapped. The poor girl gets taken to an oil tanker somewhere on the high seas during a rainstorm and Tsurugi storms the ship, kicking ass like a human buzzsaw until he finds her once more.

Tsurugi even belts one guy so hard in the guts that the guy fucking pukes!

But the one thing Tsurugi ertainly didn't expect to face was the exceedingly pissed-off Junjo — remember him? — who ran into his junkie/whore sister in the Hong Kong brothel he was hiding out in and now owes Tsuguri for his brother's death and his sister's degradation. The two fight and the sister pins Tsurugi's arms, sacrificing herself so her brother can stab through her back and impale their enemy through the chest. The sister croaks but Tsurugi staggers to his feet, only to be shot in the leg by an American Mafioso — yes, they're in this too — who in turn gets offed by a Hong Kong kung fu master who's taken a liking to Tsurugi (don't ask). Worn out and shot, Tsurugi is knocked to the rain-washed deck by Junjo, and just as Junjo's about to deliver the killing blow, Tsurugi reaches up, grabs him by the throat,

and pulls out Junjo's larynx.

Pleased with his victory, Tsurugi manages to crack a smile, while Junjo manages to be dead.

(Well, dead until RETURN OF THE STREET FIGHTER anyway, when he comes back with bionic vocal chords. No, I'm not joking.)

So there you have it, and I must admit that a bunch of still images doesn't do this wild and woolly affront to common decency the justice it deserves. I mean, if this mama-jamma was released today, it would earn an instant NC-17! So rent THE STREET FIGHTER today, but skip the awful sequels, although the immediate followup, RETURN OF THE STREET FIGHTER (1975), does have one sequence that echoes the excesses of the original: Tsurugi gets into fight with a bunch of martial arts masters on a ski slope (???) and the last guy he defeats gets vanquished by a blow to the back of the head

that literally knocks his eyeballs out of their sockets.

The guy's agonized shriek and the way the fake orbs wiggle about is worth the price of admission.