PRE-HALLOWEEN HOO-HAA AT THE BARBECUE JOINT 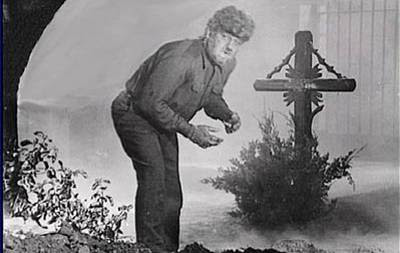 The Wolfman, caught puking in Greenwood Cemetery after seventeen shots of Jagermeister at the barbecue joint.

With Halloween only days away, the weekend atmosphere was festive as the pre-Halloween shindigs spang into being across the land. Since the day of days falls on a Wednesday this year, Friday and Saturday served as substitute party days for those whose work schedules wouldn't allow them to properly celebrate, so everywhere one turned there was a house party or some kind of madness going on at local pubs. Never the kind of place to be asleep at the wheel when it comes to such shenanigans, the barbecue joint where I used to work held its own hoo-haa on Saturday night, but a few costumed loons wandered in on Friday night as well, so these pics are from both evenings.

Despite the pissing rain on Friday, I made my way down Fifth Avenue toward the place, and while braving the inclement weather I was delighted to see this house decked out in appropriate fashion. 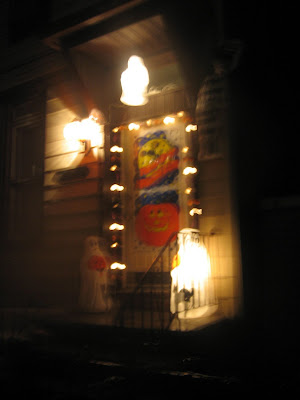 Not surprisingly, the Friday night display of costumes at the barbecue joint wasn't a case of revelers turning out en masse since that would be saved for Saturday, but there was a charming fairy who allowed me to snap her picture. 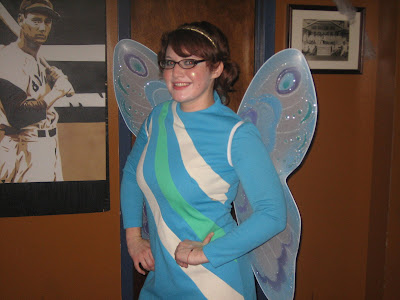 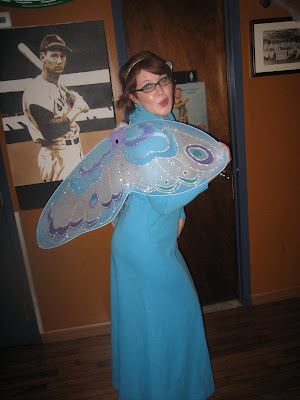 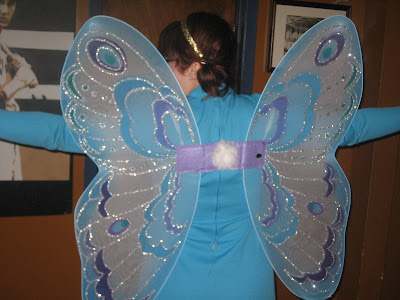 She even let kitchen loon Shun and bartender Joy in on the photo-op! 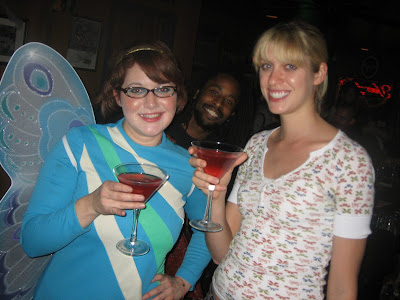 Then came Saturday night, and I gave my "Bunchewolf" getup a test drive. 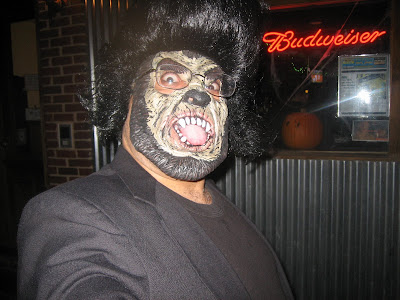 Lemme tell ya, the outfit's gonna be just fine for running around on Halloween night when it's supposed to get down to about sixty degrees or less, but I don't recommend it for hanging out in a crowded bar with a working heating system and the body heat generated by the aforementioned crowd.

Always game for costumed lunacy thanks to having the vibe of New Orleans rub off on her during her university days, Joy the bartender showed up and slung toxic libations while decked out gear that would have been right at home in an old Hollywood western cathouse run by a character named Miss Pussi DeLish. 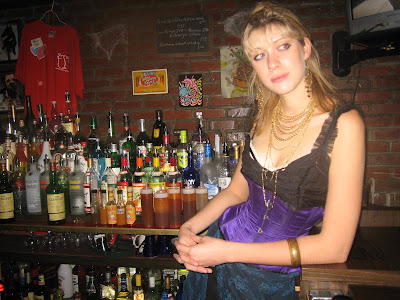 Local artiste Jerreye arrived as a skeleton, crafted in his own inimitable DIY style. 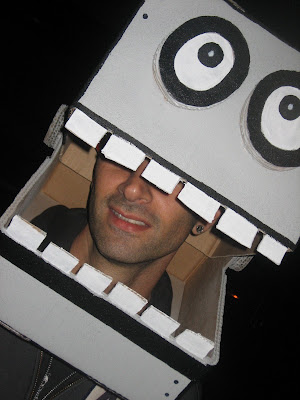 A DJ was on hand to spin some rockin' tunes, and thankfully gave the much-overplayed "Monster Mash" a miss in favor of punk rock classics, movie soundtrack snippets, and a completely unexpected airing of Frank Zappa's "Zombie Woof," a favorite of mine and also a character I portrayed for Halloween back in 1982. 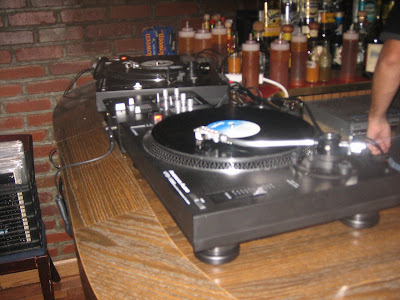 And the cool-assed DJ even worked the wheels of steel in a Darth Vader costume. Righteous! 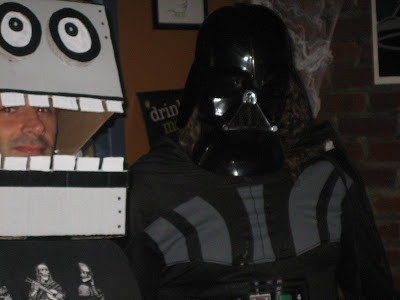 Resident terror from the Great White North Carly Rex originally intended to be a combination naughty nurse/Smurfette, but opted out of that potential boner-inducer to avoid having to paint herself blue and possibly suffer a fate similar to that of Jill Masterson in GOLDFINGER. Instead she rocked a punk-rocker/biker chick look, an aspect that I greatly appreciated and dreamt above later that night. 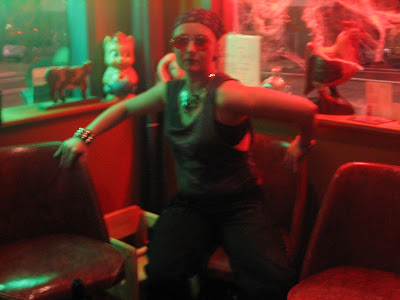 As always, there were people whose costumes didn't really represent anything in particular, but they were just happy to dress up and have a good time. 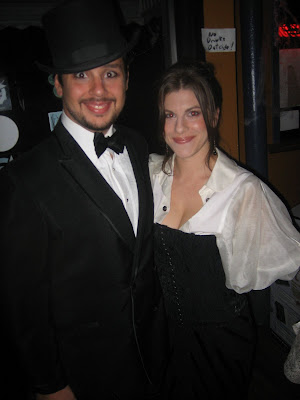 These two women are a perfect example of the "what the fuck are you supposed to be" outfit, and when they drunkenly left to find another party I ran outside to ask the explorer if she was suppsoed to be a character from a Monty Python sketch. She looked at me like I was growing a second head, blurted out "I'd like to be!" and then wobbled for balance before announcing "You know who I am!!!" Uh, yeah. Right. 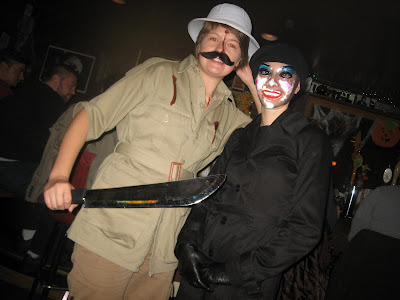 Then my old pal Amanda showed up as the "fairy fuckin' princess," a frighteningly trashy character that not only exemplified her sense of humor, but also de-glammed her natural good looks by about 98%. 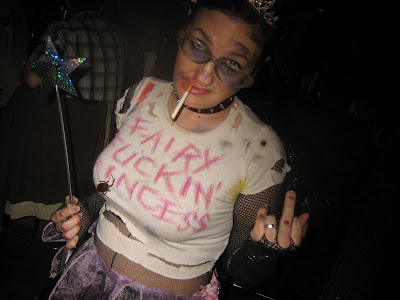 The scariest thing about this outfit is that I've seen non-costumed women who looked worse than this at the barbecue joint, more often than not cruising for some dick. If that's not enough to give you a man-gina, I don't know what is. 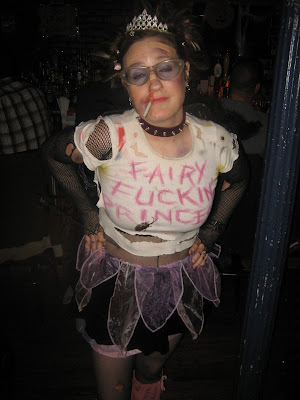 So as a preliminary blast of alter-ego wackiness, the barbecue joint's Halloween party was a fuckload of fun (although not as memorable as last year's, for reasons I won't go into here), and I'm fully in the right mental place for Wednesday. 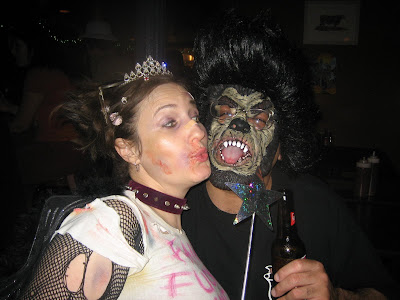 So get ready for the report from the big NYC Halloween parade and the aftermath at Christopher Street! I can hardly wait!!!
Posted by Bunche (pop culture ronin) at Monday, October 29, 2007