JOE TORRE: I WOULDN'T WANT TO BE YOU RIGHT NOW, DUDE... 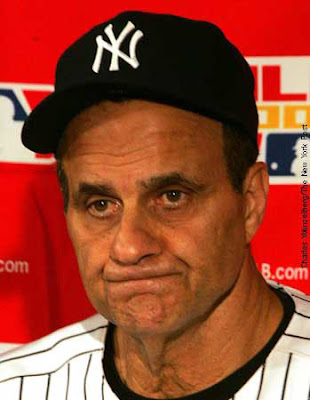 And so, once again the New York Yankees broke the hearts of fans by not kicking ass in the playoffs, but the person I feel sorriest for is Joe Torre, a man whose job was on the line contingent on a win during these crucial games and who may soon be unemployed once the fallout settles.

I've always had a fascination with the managers of the Yankees — ever since Billy Martin, a guy I found one hundred times more interesting than his players — and the pressures they must weather, so my heart sincerely goes out to Torre, a guy who looks like he just crawled out of the fucking grave on his best day and has just seen his team piss away the playoffs for the third year in a row, so you can forget about his demeanor becoming sunny for the forseeable future.

The impact of the Yankees' loss was palpable throughout the city this morning, finally silencing the subway grousing that's gone on since the Mets' truly unbelievable and apocalyptic choke against the Phillies just over a week ago, and even though I'm irritated by the Yanks' loss I'm grateful for it just so I don't have to endure another second of those fucking Mets jamokes going on and on about a team I simply do not give a fuck about.

As I sat amongst my fellow commuters on the R train this morning, not one word was uttered regarding the Yankees fizzling out, but nearly every person who clutched a newspaper was riveted to the considerable coverage, their faces contorted into grimaces that fought to stave off a litany of profanity or a broken-hearted crying jag. Then the silence was broken by a voice loudly repeating "No 'raqis...No 'raqis..." as though hypnotized. The voice belonged to a fifty-something Hispanic man who hobbled down the center of the train on a cane, and as he approached me I could smell the powerful fumes of cheap booze wafting from his person and I prayed the train wouldn't lurch and throw him off balance, sprawling him on top of me and prompting him to lose all control of his bodily functions. Thankfully that didn't happen, but as he got closer I noted his attire: the guy was clad from head to toe in the gear of a hardcore Yankees booster, even rocking an enormous medallion of the team logo. The guy was some fan who must have been out all night trying to drink away his disappointment in his team, and his moaning of "No 'raqis...No 'raqis..." wasn't an anti-Muslim tirade but was instead an exhortation of "Go Rockies," presumably beseeching the Colorado team to avenge his beloved Yanks.

As he lurched on, his shamanlike chant of "Go Rockies...Go Rockies..." gave way to a solid declaration that "Kaz Matsui is my friend!!!" and when the door opened at De Kalb Avenue he strode out onto the platform cheered on by a few shouts of "You tell 'em!" and "Fuck the Indians!"

So the malaise has spread even to the city's crazies, and there's always next year, but who will be at the Yankees' helm? Only time will tell, and I wish Joe Torre the best of luck, however all this mishegoss may pan out.
Posted by Bunche (pop culture ronin) at Tuesday, October 09, 2007

Labels: I WOULDN'T WANT TO BE YOU RIGHT NOW DUDE