ISIAH THOMAS: I WOULDN'T WANT TO BE YOU RIGHT NOW, DUDE... 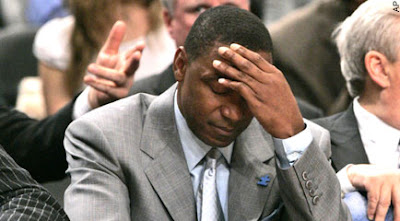 I'll just let the news speak for itself. Story from today's New York Times, and pics from other sources:

JURY DECIDES AGAINST THOMAS AND KNICKS' OWNER
By THE ASSOCIATED PRESS
Published: October 2, 2007
NEW YORK -- A jury ruled Tuesday that New York Knicks coach Isiah Thomas sexually harassed a top team executive, subjecting the married mother of three to unwanted advances and a barrage of verbal insults. But the jury also ruled that Thomas does not have to pay punitive damages to the woman, giving him a partial victory after an ugly, three-week trial.
The jury did find that Madison Square Garden committed harassment against the woman, and ruled that she is entitled to punitive damages from MSG. U.S. District Judge Gerard E. Lynch called it an "imminently reasonable" verdict and said the jury will be asked to return later in the day to hear brief arguments on punitive damages against MSG.

After the verdict, the plaintiff hugged family members and friends gathered in the back of the courtroom.

The harassment verdict was widely expected after the jury sent a note to the judge Monday indicating that it believed Thomas and the other defendants, Madison Square Garden and MSG Chairman James Dolan, sexually harassed plaintiff Anucha Browne Sanders. But the question of whether Thomas would have to pay punitive damages was up in the air until Tuesday.

Browne Sanders, fired from her $260,000 a year job in 2006, sued Thomas and Madison Square Garden for $10 million. Her case presented the Garden as "Animal House" in sneakers, a place where nepotism, sexism, crude remarks and crass language were part of the culture. The former Northwestern college basketball star characterized Thomas as a foul-mouthed lout who initially berated her as a "bitch" and a "ho" before his anger gave way to ardor, with Thomas making unwanted advances and encouraging her to visit him "off site."

Thomas, who was hired in December 2003, followed her to the stand and denied all her allegations. Attorneys for Thomas and the Garden also portrayed Browne Sanders as incompetent and unable to adapt once the NBA great arrived as the Knicks' president. 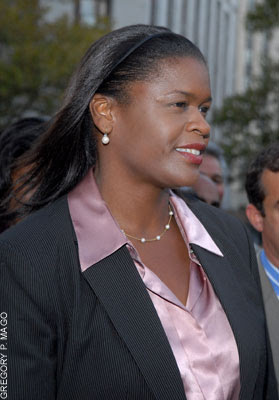 Labels: I WOULDN'T WANT TO BE YOU RIGHT NOW DUDE

It's a bad year to be a black man named Isaiah.