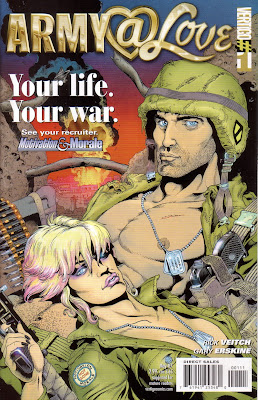 War. Just about the most fucking insane and balls-out horrible thing found in the human realm of experience, yet it continues to be waged somewhere on the planet every day, bringing devastation, misery, death, destruction of cultures, and, if we're lucky, all-too-brief moments of peace. And don't get me started on the homicidal farce that is the war the US is engaged in in Iraq, a pointless conflict that's snuffing out the lives of innocent civilians and maiming and killing our own forces... Hey, I'm a by-product of the hippie era and that whole Viet Nam mishegoss, so while I may have interest in things martial I am firmly anti-war in my politics.

In recalling some of the satirical humor that surfaced during Viet Nam, I think back to trenchant stuff that was directed at pointing out the ugliness and futility of the whole mess, stuff that you could in no way get away with in today's complacent and chickenshit media. NATIONAL LAMPOON lead the way when it came to seriously tasteless material that made it into the homes of Joe Sixpacks across the nation, its "Vietnamese Baby Book" by Michael O'Donohue being particularly horrifying, while DOONSEBURY brought us football-helmeted B.D.'s misadventures in the 'Nam itself and his unlikely and charming friendship with Phred , a Viet- Cong terrorist who was not only a helluva fun guy but was also a freak for the works of Cole Porter. Those examples skirted the fine line between absurd and offensive, but seeing as war is both absurd and offensive that viewpoint was not only artistically valid but also exactly what was needed to provoke thought on just what it was that we were doing where we didn't neccessarily have any business being.

And now the US is over in Iraq, waging a war launched under false pretenses — fuck that shit, I'll just state it for what it really is, namely just plain old bald-faced lies to the American public and the world at large — with nothing even resembling a coherent strategy and no real end in sight. No one is winning anything, people are being crippled and killed for no reason other than jingoistic hubris and greed, our country's international image is worse than ever, and there's a noted scarcity of balls-out and fearless commentary or satire that sticks its dirtiest, just probed-its-own-anus index finger down the throat of our military excesses, causing a deluge of vomit to splash us right in our collective face. Instead we get another season of brain-dead, "safe" bullshit like reality shows, song and dance competitons, and the inexplicable non-cancellation of ACCORDING TO JIM, in other words a tanker-load of consciousness-dulling media candyfloss to turn our attention away from our government's massive failure and outright stupidity. With that in mind I say thank the gods for Rick Veitch and his ongoing comics series ARMY @ LOVE, a painfully funny and disturbing modern day war story that wallows in the madness of hormonally-fueled aggression, greed, and chicanery. 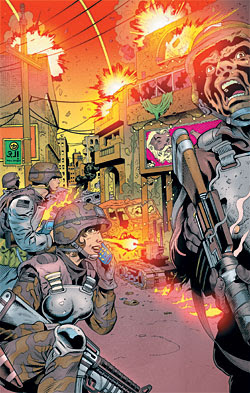 Essentially a soap opera set in "the not too distant future," ARMY @ LOVE's pointless conflict takes place in the Middle Eastern country of Afbaghistan — I love that name — and focuses on the in and out of bed intrigues of a cast as large as that of any just-launched soap. Infidelities, jealousy, Wiccan love spells, kinky politicians, a mentally-handicapped soldier named Beau Gest (a gag I guarantee will be lost on much of this book's audience), the atrocious and utterly manufactured hit song by Paco Lypsync (just reading it made me want to kill the motherfucker), Afbaghistani women with a hidden agenda, a bewitched stage magician, and a grunt in a Wolfman mask are all among the many elements brought together in a war made that much crazier by the miliary's insidious Motivation and Morale initiative. Preying upon the empty consumerism and media-opiated interests of a volunteer army full of adrenaline junkies, the Afbaghistan conflict is marketed to potential soldiers by Motivation and Morale (MOMO for short) as the ultimate rush — you get to travel and actually kill people, with no legal repercussions, and that's a good thing! Plus you get a bitchin' cell phone! — and is secretly spiced with orgies so overflowing with sweaty, intertwined limbs that you'd think you'd accidentally walked in on some Lovecraftian wiggly amusing itself to a copy of 18 & NASTY Vol. 10. It's exactly the kind of thing our real-life military would pull if it could get away with it, and that's the key to the madness of ARMY @ LOVE that simultaneously makes me laugh my ass off and scares me shitless, yet keeps me returning to the comics shop for the next installment. 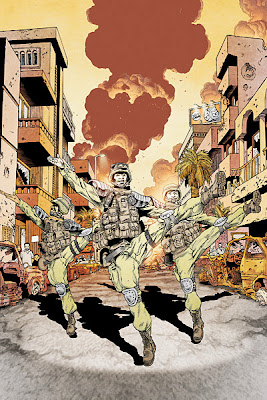 Written and illustrated by Rick ( ABRAXAS AND THE EARTHMAN ) Veitch, with Gary (THE FILTH) Erskine on inks, this series is a solid winner on both the story front and the art pyrotechnics; Veitch's style is the closest thing these days to the underground comics that thankfully warped my mind and defined a great deal of my twisted sense of humor, what with its fleshiness and "realistic" art that's just shy of cartoon-looney, and I doubt that this material would have worked at all if handled by anyone else, let alone anywhere near as well as it is when deployed by Veitch and Erskine. 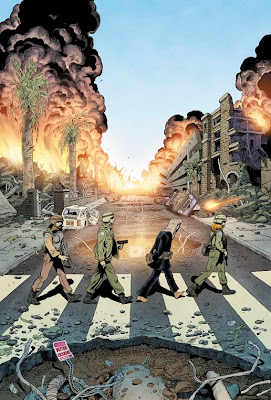 ARMY @ LOVE is a monthly book — easily the best ongoing put out by Vertigo since Y: THE LAST MAN and FABLES — that definitely deserves your readership and support, so sign on now for a monthly barrage, or get started with the first trade paperback, THE HOT ZONE CLUB , that collects the first six issues. 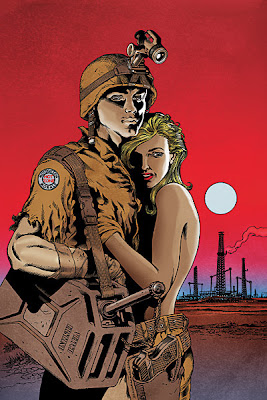 So what the fuck are you waiting for? You've got your marching orders, so TRUST YER BUNCHE! Schnell!!!
Posted by Bunche (pop culture ronin) at Tuesday, October 02, 2007