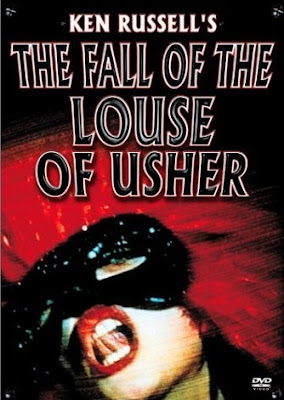 A couple of weeks ago when I started reading a biography and overview of the works of British director Ken Russell , I mentioned the book to my brother-in-all-but-genetics, Chris G, saying it was fun to read a book that so lovingly chronicled my favorite behind-the-camera lunatic. Chris replied with, "Yeah, but you obviously haven't seen THE FALL OF THE LOUSE OF USHER!" When I asked him if he meant Edgar Allan Poe's THE FALL OF THE HOUSE OF USHER and he emphatically answered with, "No, you heard me the first time. THE FALL OF THE 'LOUSE' OF USHER. I'm not a fuckin' idiot, ya know!"

Chris explained to me that it was a fairly recent effort by the mad visionary who gave us legitimate cinematic classics like WOMEN IN LOVE (1969) and THE DEVILS (1971), and that it was shot entirley on a handheld camcorder. He then went off on one of his signature film tirades, foaming at the mouth over how it was one of "the worst pieces of shit" that he'd ever seen, and let me tell you that there's no one more passionate and opinionated about the arts than the Italians, and Chris' irate goobah-ness has seldom been brought to fore like it had for his anti-LOUSE OF USHER diatribe. Thus forewarned I was intrigued, and when Chris came down to visit this past Saturday night he brought me a copy of THE FALL OF THE LOUSE OF USHER so I could judge for myself.

Now, I'm a self-confessed Ken Russel fan, but even I don't like all of his movies, reserving special disdain for the vastly overrated and pretentious GOTHIC, so I was curious to see if THE FALL OF THE LOUSE OF USHER could possibly be any worse than that odious arthouse bore. Now that I've seen THE FALL OF THE LOUSE OF USHER for myself I can honestly say the following things about it:

1. THE FALL OF THE LOUSE OF USHER is without question the worst film Ken Russell has ever made, and may just be the worst film ever perpetrated by a former A-list talent.

2. Cursing, gore and titties aside, this film can be counted as Russell's answer to Ed Wood's PLAN 9 FROM OUTER SPACE (1959) thanks to its nearly total lack of anything even resembling a budget, a cast of people more obscure than the night staff at a Piggly Wiggly in Oakwood, Georgia, and ludicrous attempts at special effects that wouldn't pass muster on the cheapest of Public Access offerings.

3. Russell has long been on the cusp of being considered a genius or a madman, and with this film my opinion is swayed to the latter school of thought. I am firmly convinced that Ken Russell is balls-out, barking mad.

4. I fucking love this movie and intend to torture as many innocent people with it as I possibly can.

If you regularly read my ramblings on film you know that I love crazy shit that brings your brain to a complete, confused halt and makes you ask, "What the fuck?!!?" about the entire film, so, truly terrible though it is, how could I not love THE FALL OF THE LOUSE OF USHER? It was shot by an octogenarian who was not too far off from a stroke, bore a no-name pack of actors that included his groupie wife, was filmed in and around his soon-to-collapse house in the British countryside, and is loaded from toes to tits with imagery that could only have come from the lysergic imagination of Ken Russell, only now his vison was completely and totally free from the interfering claws of a studio and therefor allowed to run utterly unchecked with its dick in its hand and a bizarre song in its heart, so what's not to love?

One of the things I loved about going to an art college was getting to see some of the student movies that came out of the film department, many of which were unintentionally overblown and pretentious, and LOUSE reeks of that aesthetic, only as foisted upon an unsuspecting public by a total lunatic. I mean, just look at this compostition and tell me it doesn't look like something out of a high-minded — in both senses of the term — student film: 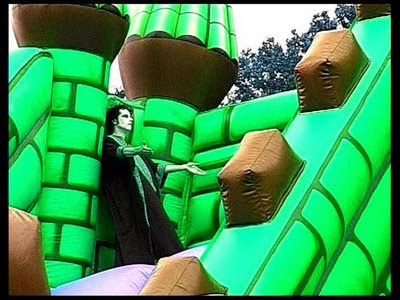 By now you're probably wondering exactly what the fuck this whole mess is about, and as near as I can tell you it's a fusion of multiple Poe stories and German expressionist classic THE CABINET OF DR. CALIGARI (1920 ), in which Roddy Usher, a pop star weirdo/bastard-son-of-the-Joker lookalike, 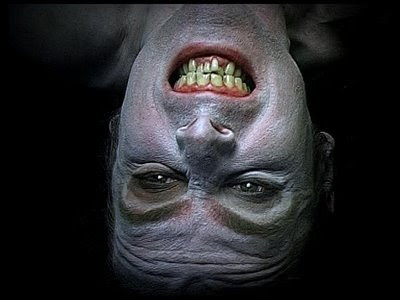 gets sent to a mental institution after being busted for the murder of his wife, Annabelle Lee. From that small oasis of identifiable plot the viewer is dumped into a plotless, structureless morass of torture, rock music, feeble attempts at rap, incomprehensible religious symbolism with topless nuns tormenting some naked chick with butcher knives, 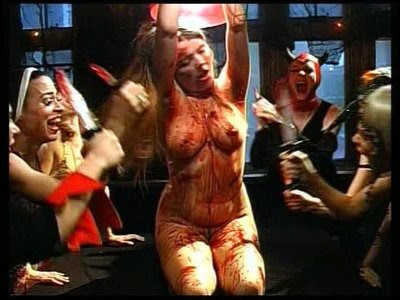 the hero being threatened with castration by a pasty-white nurse, a spirited fuck session between a blowup sex doll and an inflatable Tyrannosaurus Rex that for the life of me I can't quite figure out, 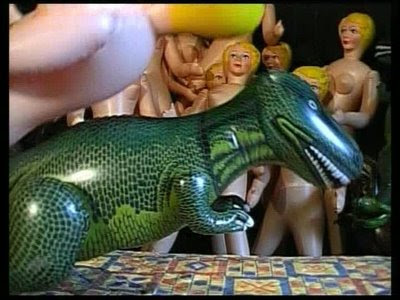 the mad Dr. Calihari — played appropriately enough by Russell himself, looking and acting totally out of it on booze and/or drugs — 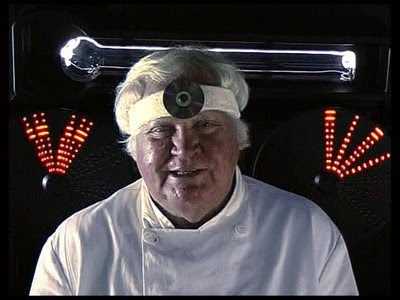 and even a gypsy-conducted séance that features a mummy played by a blonde British chick who, though wrapped from head to toe in drugstore bandages, delivers her lines in a minstrel show "now lookee hyear" voice. During the séance the minstrel mummy dons the mask of Egyptian god Osiris and summons his cock to figure out just what the hell is going on — no, I am not making up a single word of this — said cock being represented by a rainbow-colored Slinky attached to some sort of balloon.

And it somehow only gets crazier from there.

THE FALL OF THE LOUSE OF USHER is an eighty-two minute endurance test best recommended for Russell hardcores only, and even maybe not for them. But if you're willing to kick your gray matter into the nearest garbage disposal and check out a relentless assault of truly fucked-up visuals, then look no further than this mind-warping volley of utter madness from a creator who looks like he's going to go out fighting. Exactly what it is he's fighting for or against is open to debate, but he's going out fighting nonetheless, and for that I salute the crazy bastard.

Oh, and I have no fucking clue what the title means.