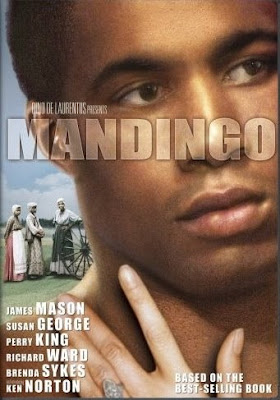 The sensual. The Shocking. The Sad. The Powerful. The Shameful. Expect all that the motion picture screen has never dared to show before. Expect the truth. Now you are ready for "Mandingo."
-original tag line from the original theatrical release of MANDINGO

I have no idea why I'm so fascinated by the film adaptation of Kyle Onstott's 1957 bestselling epic of the slavery era, but if I had to provide a concrete answer I'd probably say it's because it's arguably the single most offensive film ever released by a major Hollywood studio that also involved a name director — Richard Fleischer, helmer of such classics as 20,000 LEAGUES UNDER THE SEA (1954), THE VIKINGS (1958), and FANTASTIC VOYAGE (1966) — as well as a great thespian spouting some of the most insanely racist and ridiculous dialog in cinematic history, in this case James (A STAR IS BORN) Mason. And this magnificent monstrosity is finally available for the first time in a legitimate DVD release, so there's no need to rely on dodgy "gray market" or foreign copies.

The plot revolves around the pre-Civil War goings-on at Falconhurst, a a plantation that breeds fine slaves, and focuses on the adventures of young Hammond Maxwell (Perry King), wealthy and handsome heir to the plantation. Hammond lives like a prince and gets his hump on with every available slave girl since "it's a master's duty to pleasure a wench first time," so the guy ends up with such a colossal case of Jungle Fever that he finds himself totally unaroused by white women. That's a problem because Falconhurst must eventually pass on to one of Hammond's offspring, but obviously not one of his legion of black bastards, so at the urging of his father (James mason), Hammond goes in search of a suitable wife and ends up marrying his cousin, Blanche (Susan George). While returning home with Blanche, Hammond also buys a beautiful slave girl named Ellen (Brenda Sykes), who ends up becoming the true love of his life (something that does not sit well with Blanche), and also purchases Mede (Ken Norton), a huge and ultra-virile slave whom Hammond wants to train as a "fightin' nigger" and use as prime stud material because his Mandingo blood is the most prized of all the African varieties. 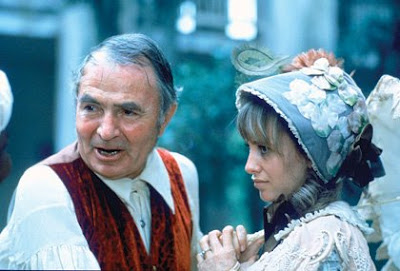 James Mason and Susan George: a two-Brit scenery-chewing juggernaut.
Once back at Falconhurst the story shifts into balls-out crazy mode and soars into the stratosphere of bad movie Nirvana, piling on the racism, torture, bloody human cockfights,interracial shenanigans, good ol' Southern-style incest and more seriously sick soap opera shit than you might think possible, all building to one of the most horrifyingly offensive climaxes in screen history. This crazy quilt of antebellum brutality and sleaziness is ripe enough from the get-go, but the contributions of James Mason and Susan George cannot be overlooked; it almost seems like the two British actors were in a competition to see who could turn in a more ludicrous performance, both making with the worst Southern accents ever committed to celluloid and cracking up the viewer with such unintentional howlers as Mason's deathless scolding to one of his slaves, 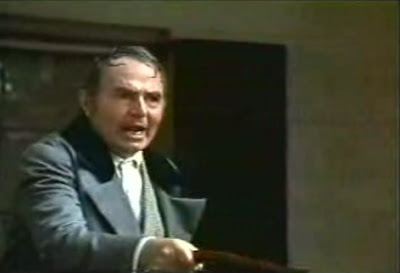 and George's incredible performance on the morning after her wedding night when Hammond calls her on the fact that she very obviously wasn't a virgin. 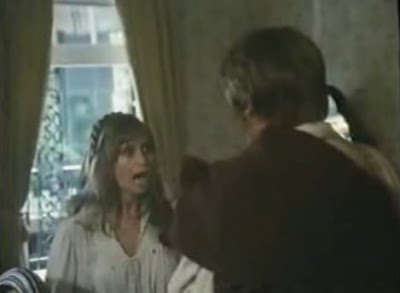 "Hammond! Wherever did you get such a zany notion!"
If you didn't know better you'd swear that MANDINGO was an over-the-top satire of steamy plantation sagas, written and directed by John Waters, but while that isn't the case it is one hell of spectacular train wreck. The odd thing is that even though it's sheer trash, MANDINGO is simultaneously perhaps the most in-your-face-honest American film about the inhuman brutality and horror of chattel slavery, and while I may find the film a hoot from start to finish it's impossible to deny the flick's power to revulse when the going gets nasty. When compared on the basis of its depiction of the subject matter, ROOTS, the television mini-series that served as an eye-opener for much of the American public, is a kiddie movie, and that's really saying something, so while I consider MANDINGO one of my all-time favorite movies (for all the wrong reasons) and highly recommend it to the curious, keep in mind that it's pretty rough and definitely not for the squeamish or easily offended.

Oh, and as for any cool extras, forget it. I just received the DVD and it includes no commentaries, no "making of" documentary, no look at the source novel to set the whole thing into perspective, not even the goddamned trailer. Bubkes. Zip. Zero. The big goose egg. That's a damned shame, because the content of MANDINGO makes for fascinating discussion, especially when you take into account that a movie like could never be made nowadays without the studio being burned to ground and armed riots breaking out in theaters. Hopefully this error will be rectified when (or if) the even loopier sequel, DRUM (1976), comes out on disc.

And in case any of you are interested in reading more about the 1957 source novel, check out THE MANDINGO PROJECT, an in-depth examination of the unabridged version that I wrote a couple of years ago. It's long, but I recommend reading it before seeing the movie so you see the differences between it and the novel. It's one of those rare cases where the movie is a vast improvement over the book, so make of that what you will. Anyway, I'm going to consolidate THE MANDINGO PROJECT into one entry, and will post it shortly. 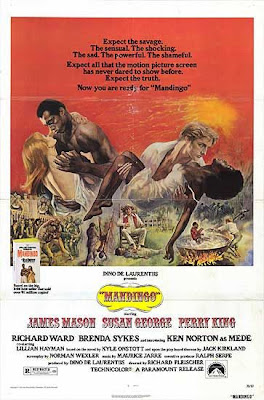 Labels: FLICK YOU, THE MANDINGO PROJECT

Why does it NOT surprise me that Dino de Laurentiis was involved in that?

And on the subject of race relations, it seems America still needs some serious wake-up time. Just this morning, a "friend" of my partner commented that Michelle Obama is "still living in the Civil War" with all her "vicious racist speeches... claiming that black men are oppressed." That said women is of Cherokee ancestry makes the statement all that more appalling... although considering that black slavery was one of the "modern practices" the Cherokee picked up prior to Andrew Jackson's big heave-ho, maybe it's not THAT surprising! Sad, though, yes. We still have so far to go.

("Baby mama," my ass. I keep waiting for FOX to just call Obama a nigger and be done with it, already.)

I get the feeling this movie was bankrolled by Dino then sold to the studio for release based on it's "Star Power" and the best-seller sales of the novel. Either way, someone was clearly asleep at the wheel, thank god...

It amazes me at how trashy movies like MANDINGO and it sequel, DRUM, probably provided the most in-depth look at the horros of American slavery in Hollywood history.