FUTURAMA: THE BEAST WITH A BILLION BACKS (2008) 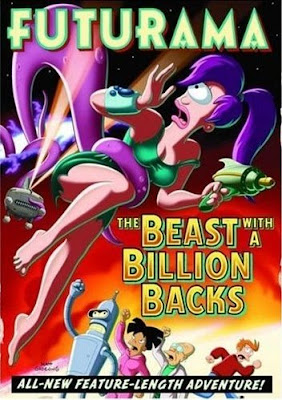 So I saw the new FUTURAMA made-for-DVD feature, THE BEAST WITH A BILLION BACKS, and after the fun and thoroughly entertaining return from the cancellation grave that was BENDER’S BIG SCORE this second movie comes as rather a letdown. As a series, FUTURAMA always prided itself on being clever and having a fairly good grip on the logic of its own universe, but somebody on the creative team was definitely asleep at the wheel this time around.

Picking up about a month after the events in BENDER’S BIG SCORE, the rift in the fabric of the universe caused by the overuse of a one-way time travel code is still there, looming in the sky like a gigantic rip in the ass of the sky’s jeans. While a terrified populace ponders exactly what lies within the anomaly, life goes on as usual for the Planet Express crew as Fry (Billy West) introduces his colleagues to Colleen (Brittany Murphy), a woman he talked into bed after meeting her on the street amid a throng of fearful anomaly-watchers. Seeming to have instantly forgotten his long-held torch for sexy cyclopean mutant Leela (Katey Sagall), Fry moves in with Colleen and discovers that she’s majorly polyamorous, already sharing her apartment with four other live-in boyfriends. Swiftly tiring of his status as a romantic also-ran, an emotionally crushed Fry breaks up with Colleen and stows away aboard an expedition to explore the rift. Meanwhile, Bender (John DiMaggio), feeling rejected when Fry leaves him for Colleen, seeks and gains entry into the legendary League of Robots, a gathering of such notable automatons as Calculon and Hedonismbot who sit around drinking and kvetching about the overall uselessness of humans while doing nothing to further the state of robotkind. But as Bender’s social life takes off, Fry discovers a gigantic, tentacled life form within the anomaly, and the strange being extends its appendages through the rift to physically link with every sentient being in our universe via shoving its tentacles into the back of people’s necks. In no time the world is under the thrall of the alien Yivo (David Cross) and its wiggly cult of universal love, with Fry as its Pope, and a mistrustful Leela uncovers the diabolical secret behind the alien invasion: Yivo’s tentacles are not intended for harmful conquest, but are instead sexual organs with which it seeks to mate with our galaxy’s sentients. Essentially, when plugged into by Yivo an individual is filled with euphoric feelings of love and sexual satisfaction, and Yivo’s only desire is to bond with other intelligent life forms in a mutually beneficial relationship. 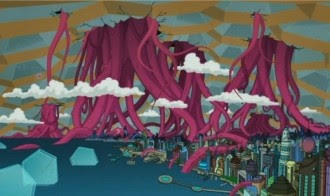 THE BEAST WITH A BILLION BACKS may read like a straight-up winner, but it’s FUTURAMA at its most mediocre and even the majority of the voice cast seems uninterested in the proceedings. Bender’s interaction with the League of Robots is at best a throwaway gag stretched past the breaking point and offers nothing to the overall story, while Fry’s sudden hookup with Colleen makes no sense whatsoever in the wake of the previous film’s events; Fry’s deep and unrequited love for Leela is one of the forces that drives the character and makes him sympathetic, so to have the writers suddenly forget that aspect of his personality seems like sloppy and careless writing, a point addressed by the creative team in the commentary and given a pass because they felt that the fans wouldn’t notice it and figure a lot more time had passed between features, thereby allowing Fry some time and emotional distance from the object of his affections. The arcs of the rest of the Planet Express gang don’t amount to much either, and other than a newly-married and widowed Amy getting it on with the ever-assholish Zap Brannigan there’s little else to speak of.

The one saving grace to all of this is the wonderful Yivo, a huge, hermaphroditic alien presence that’s kind of the anti-Starro the Conqueror (look it up) and realizes it has conquered when it should have played fair and courted, so Yivo suggests a “do over,” a second chance at romance that shows us how sweet, considerate and just plain downright lovable the Lovecraftian thing is, resulting in every sentient in this universe legitimately falling in love with it and agreeing to live with it forever on its side of the rift (Yivo’s main body cannot survive the “atmosphere” of our universe). Once there, the sentients discover that Yivo as an environment is what has long been held as the image of Heaven, complete with angels (actually humanoid birds that help Yivo by eating unwanted parasitic organisms), and anything they want or need being available in abundance. The good vibes are so strong that everyone thrives on Yivo’s positive influence and message of universal love, completely shedding their inhibitions and jealousies and existing in a hedonistic paradise. That is, until Bender decides to “rescue” Fry from his fate.

So taken for what it is, THE BEAST WITH A BILLION BACKS is worth a look only for FUTURAMA die-hards, and even if you find yourself in that category you will probably be disappointed by what you find, although Yivo does totally rule. FUTURAMA can be considered its own worst enemy thanks to the very high standards it has set for itself, and its creators can certainly do better than this lackluster effort, so let’s all hope that the next feature, BENDER’S GAME, a spoof on fantasy role-playing and all the lunacy that goes with it, is as much fun as its preview trailer. That one’s due in time for the winter holidays, and I’ll be there waiting; FUTURAMA has never let me down before, so it was probably inevitable that sooner or later there would be a clunker of an installment and I’m willing to write off THE BEAST WITH A BILLION BACKS as a place-holder until the more riotous-looking followup. Too bad Yivo couldn’t have had a feature as worthy of its inclusion as it deserved… 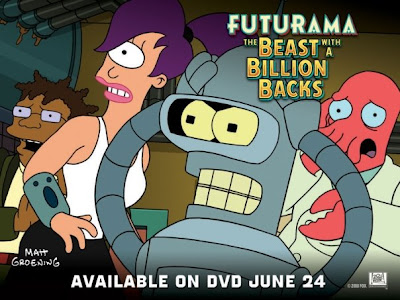 So Cthulhu meets Osho by way of Overfiend? That alone sounds worth the rental price. Pity it's not as good as it could be, but like you said, Futurama's worst is still better than almost everything else out there... often including even The Simpsons.

All valid points Buncho, but i have to say the all-round creepyness of the feature won me over. Less on the gags but more on the story was interesting. I prefer a better balance of both, but it was curious to see nontheless.

Still, that 'first-born child' bit with Bender was feckin' hilarious. I was laughing for ages!