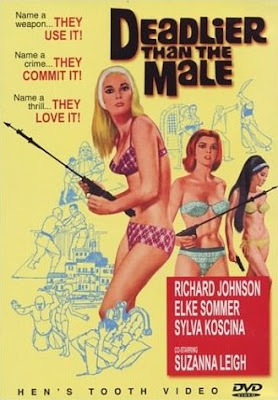 Back in the 1960’s when the world went positively apeshit over the exploits of cool superspy James Bond, filmmakers all over the globe flew into action and released a slew of imitators in hope of cashing in on the secret agent zeitgeist. There were seemingly hundreds of Bond imitators unleashed upon an innocent moviegoing public and the majority of them sucked out loud, being cloyingly and unfunnily campy at best or downright boring at their worst — the Derek Flint movies, OUR MAN FLINT (1966) and IN LIKE FLINT (1967) being among the best of the lot — so finding a gem amongst that misbegotten subgenre, the so-called “spy spoofs,” is a rare occurrence. DEADLIER THAN THE MALE isn’t just a rare gem, it’s an downright treasure of the genre and it came from out of nowhere to make my list of all-time favorite espionage thrillers. 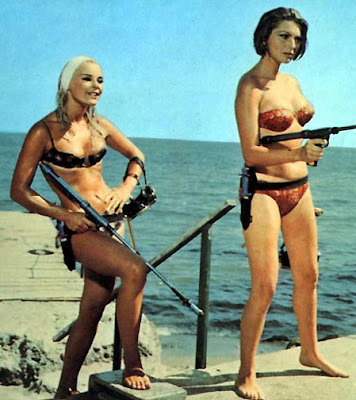 The luscious and lethal Imma (Elke Sommer) and Penelope (Sylva Koscina).
As the body count rises, British secret agent Bulldog Drummond (Richard Johnson, a good ringer for Sean Connery) is called in to investigate and must figure out who the murderesses are and, more importantly, why they’re on a killing spree, resulting in Drummond’s efforts placing him and his randy nephew, Robert (Steve Carlson), square in the killers’ sights. To say any more would give away much of this thoroughly entertaining adventure, so I’ll shut up right here and now. Just take my word for it that if you’re a fan of Bondish thrills, an enthusiast for “chicks who kick ass” movies, or even a casual observer, you won’t go wrong by seeking this one out.

DEADLIER THAN THE MALE shamelessly set out to ape what made the earlier Bond films so much fun and possesses all of the elements that we’ve come to expect from the 007 series, so much so that one could have easily taken an unproduced Bond script, crossed out the words “James Bond,” replaced them with “Bulldog Drummond,” and no one would have been any the wiser save for noticing Richard Johnson (heh, "Dick Johnson") filling in for Sean Connery. No bullshit, it's got everything you need to make a decent James Bond flick: 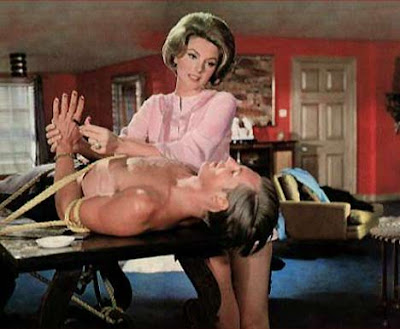 Penelope convinces Robert (Steve Carlson) that smoking is very bad for his health.
In short, it's all good and I had a big, satisfied smile on my face when the film ended.

Other than tumbling across it and reading many reviews touting how good it was, DEADLIER THAN THE MALE further piqued my interest with the presence of Elke Sommer, one of the rare Aryan types who gets me going. 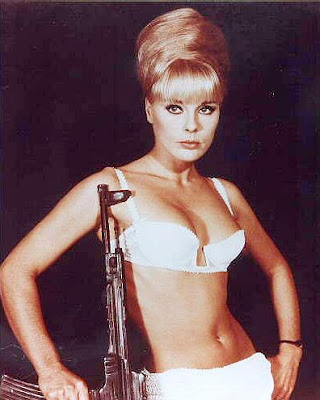 Elke Sommer, a mainstay of trashy sixties cinema, seen here in THE WRECKING CREW (1969).
Her beauty was compounded by a genuine sense of humor and great comedic chops as proven in A SHOT IN THE DARK (1963), and she turned up frequently in sixties flicks that required a hot piece of Eurotrash who could actually act, perhaps most notoriously in the howlingly-bad must-see all-star disaster THE OSCAR (1966). And as if Elke wasn't enough to get my attention, she's aided by Sylva Koscina, a Croatian cutie probably best known to film goons as Iole in the Steve Reeves peplum classics HERCULES (1958) and HERCULES UNCHAINED (1960), a character I've carried a torch for since I was but a wee Bunche. 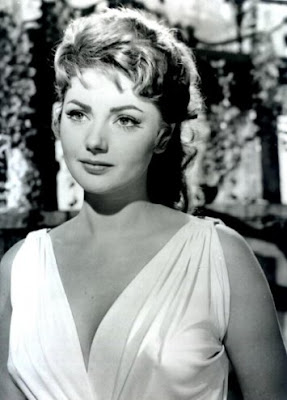 Sylva Koscina as Iole, the demigod's squeeze in the first two Italian Hercules flicks.
Koscina's turn as Penelope was bound to appeal to me since she's not only cute and sweet as can be, but is also a professional killer who genuinely enjoys her job as much as she likes chasing guys. Hot + crazy = a typical Bunche girl, and I have no explanation for this phenomenon. It just is. But I digress...
Unlike most of the legion of Bond clones, this one delivers in spades, even when the actual series began to suffer under its perceived need to outdo itself, becoming an excessive self-parody by virtue of sacrificing the plot in favor of spectacle and gadgets while the scripts became more ludicrously fantastic and convoluted. I’d even go so far as to say that DEADLIER THAN THE MALE is actually a hell of a lot better than the two Connery Bond films that came out right before and after its release, namely THUNDERBALL (1965), a slow-moving bloatfest worth seeing mostly for a great villain, and YOU ONLY LIVE TWICE (1967), the first of the insanely over-the-top Bonds that blends spaceships, assault helicopter fights, offensively stereotypical western male fantasies about Japanese women, and — I shit you not — ninjas to form what amounts to a listless travelogue with would-be clever dialogue. In every way, DEADLIER THAN THE MALE is the Bond film that should have been a part of the series rather than those two lackluster entries, both of which used to hold a fond place in my younger Bond fan's heart, but now stand revealed in my eyes as nothing more than examples of a franchise operating on autopilot and following the theory of "if it ain't broke, don't fix it." Why sit through either those for the umpteenth time when you can add this overlooked classic to your Netflix queue? TRUST YER BUNCHE and give this a look at once!
Posted by Bunche (pop culture ronin) at Friday, June 06, 2008