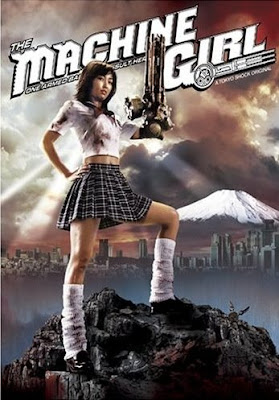 if you, like me, are fed up with movies that promise heaps of action, gore and blistering violence but then pussy out in every possible way, allow me to direct you to THE MACHINE GIRL, a live action Japanese offering that is so balls-out crazy and over-the-top across the board that it brought an ear-to-ear smile to my face. I was intrigued by this film's trailer when I saw it several months ago, so when I stumbled across the movie itself while DVD shopping on Friday I figured I'd take a chance on it, and, hoo-boy, am I glad I did. I've frequently decried the shit quality of many recent action flicks from the Land of the Rising Sun, but this one gets a solid 10 out of 10 for its unfailing intent to give the bloodthirsty audience exactly what it wants. And then some! It's the goriest film I've seen in who knows how long, and as per what you'd expect from the Japanese it's barking mad in its over the top carnage and violence; no bullshit, I had exclaimed "Holy shit!" no less than three times before the movie was even five minutes into its running time. 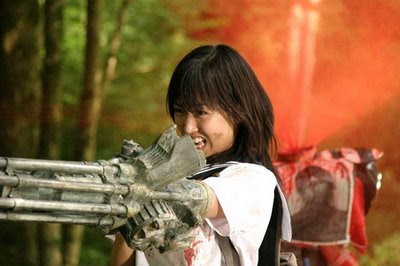 A sterling example of the tried and true "you killed my brother" revenge genre, THE MACHINE GIRL takes the story of a high school girl named Ami (Minase Yashiro, in her film debut) who seeks retribution for her younger brother's murder at the hands of a pack of sadistic bullies and sends it clear into the stratosphere of mayhem-laden ass-whuppin' by rendering the sanguinary set pieces as impossibly and cartoonishly spewy as is possible to depict, all while maintaining a brisk pace that barely allows viewers time to catch their breath. The character development is minimal at best, and once the heroine's motivation is established, it's off to the races. To put it as simply as the film does, Ami tracks down the bullies and metes out justice accented with geysers of blood and entrails, losing her left arm in a one-two punch of a tempura deep-frying and a samurai sword dismemberment along the way, eventually replacing her missing limb with a fully functional assault helicopter's machine gun — complete with a seemingly endless supply of rounds — and, near the film's climax, a chain saw originally wielded by her garage mechanic ally. 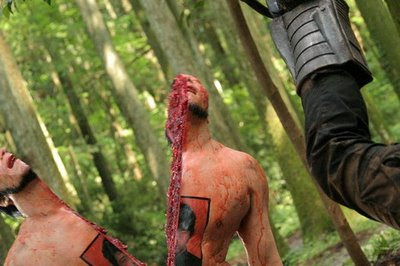 A bit from the chainsaw fight, before the spewing blood was added.
And as if that isn't enough, the cowardly asshole who leads the bullies is revealed to not only be a spoiled Yakuza prince, but also the heir to a clan of ninja descended from the legendary Hattori Hanzo himself, so we also get modern day ninja action thrown into the mix for good, extra-stupid measure. It's an orgy of bloodshed, creative demises, loony superheroics, and a complete disconnect from reality in one of those worlds where the police simply do not exist until well after the participants in the mayhem have bled out, and I thoroughly enjoyed every frame of the damned thing.

As you've probably gathered, THE MACHINE GIRL is unrelentingly excessive, but the film is so crazy that it soon veers into outright parody of its own genre and is frequently hilarious because it's all played totally straight, with heaps of ass-kicking and violence committed by a cute schoolgirl in one of those now-fetishized school uniforms. And what's not to love about a film featuring the return of the favorite weapon of all us martial arts movie buffs: the venerable "flying guillotine?" And, yes, there's more than a bit of a debt owed to both PLANET TERROR (2007) and ARMY OF DARKNESS (1992), but I had more fun with this movie than both of those flicks combined (and I liked both of them to varying degrees). And just so we're absolutely clear on this, Peter Jackson's DEAD ALIVE (aka BRAIN DEAD, 1992) still gets my vote as the goriest film ever made — or that it's even possible to make — but THE MACHINE GIRL gives it a damned good shot at the title, and it's entertaining as a motherfucker. TRUST YER BUNCHE and put THE MACHINE GIRL at the top of your Netflix queue immediately! 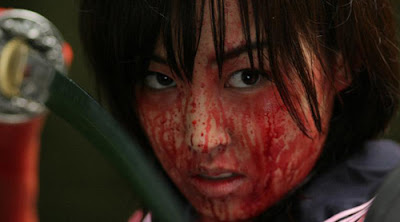 I knew I'd see this movie on your list when trailers started appearing a few months ago. I got a hold of it myself and plan on watching it soon. It will be a lot of fun.

If you liked this one, you should definitely catch TOKYO GORE POLICE, also from Media Blasters, at the NY Asian Film Festival later this month. We'll be screening TGP during opening weekend. Keep an eye on our website for the schedule, to be announced this Friday.

TGP's director is the f/x guy from MACHINE GIRL and several other similar productions, and he surpasses his mentors with this, his debut film. Where MACHINE GIRL is spoofy and kitschy, TGP is hard-assed and cold. Basically ROBOCOP transplanted to the body-modification world of David Cronenberg and Shinya Tsukamoto, it's filled to brim not only with gory violence, but also some transgressive sexual imagery that'll make the hair on your little head stand up.

This one's really going to blow people away - believe me. Check out a promo video of it here:

Gonna watch it this week sometime. Saw Planet Terror last week and really enjoyed it for its sheer insanity, so it should prove to be a good warm up for Machine Girl.