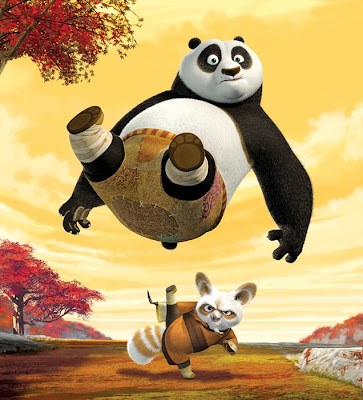 After churning out mostly mediocre or rubbish animated films for years (SHARK TALE, the SHREK sequels, MADAGASCAR, BEE MOVIE), Dreamworks finally manages to release a piece that gets everything right from start to finish. It's apparent from the film's opening frame that a lot of care and thought went into the making of the delightful KUNG FU PANDA, and while the story is certainly nothing new — especially to those of us who live and breathe martial arts flicks — , it tells a familiar tale with a great deal of heart, enthusiasm, and respect for the viewer's intelligence while completely eschewing the anachronistic and largely inappropriate pop culture jokes that worked in the first SHREK and nowhere else since.

Po (voiced by Jack Black) is the fat son of a noodle chef who, though being groomed to take over the family business, has dreams of one day becoming a great kung fu master and hero of the people, but while quite game and enthusiastic, he's lazy, clumsy, and has no skills whatsoever. The unlikely wannabe gets his shot at glory when the prophesied escape of the villainous and incredibly skilled Tai Lung (DEADWOOD's Ian McShane) looms imminent and a martial arts master must be named as the sacred Dragon Warrior in order to handle the threat. Po, quite by accident, finds himself awarded the vaunted title, much to the horror and dismay of the diminutive Master Shifu (Dustin Hoffman) and his balls-out badassed students, the Furious Five, each representing an embodiment of a classical animal-based kung fu style (specifically tiger, mantis, crane, snake, and monkey). All are dumbfounded that a fat load like Po could be the Dragon Warrior and all are at first determined to make sure that he gives up and leaves the temple, but they didn't expect Po's genuine love of what they do to fuel him to give it his best shot. While he's pretty much a washout, Po's girth and enjoyment of his training work to his advantage, and Master Shifu figures out just how to motivate his unwanted new student to greatness, all while his adopted daughter, Master Tigress (Angelina Jolie), seethes at the role that should have gone to her is usurped by one she feels is unworthy. As Tai Lung approaches and Po leaves the temple to accompany his father as the local villagers evacuate before the coming martial apocalypse, the Furious Five advance to stop him, but are unceremoniously handed their asses in a butt-kicking of painfully disheartening proportions. When Master Shifu, no slouch himself, proves unable to defeat Tai Lung — who, by the way, is also his adoptive child, one in whom he is deeply disappointed because he turned to evil — , Po returns to save the day after reaching a philosophical epiphany unwittingly provided by his noodle chef dad, providing the ages-old lesson of "believe in yourself, and you can achieve miracles" for a new generation of moviegoing little ones.

I would have had a great time with KUNG FU PANDA even had I not been a devotee to the martial arts, so I highly recommend it to anyone who enjoys a fun "hero's journey" or training film, as well as advising lovers of quality animation to see this on the big screen in order to get the full effect of its visual grandeur. As for the individual points of note:

Truly beautiful in every way, I wish Oogway had more screen time.
So don't wait for KUNG FU PANDA to hit DVD or cable. Go see its plethora of visual storytelling wonders on the big screen as it was intended, and I highly doubt you'll be disappointed. 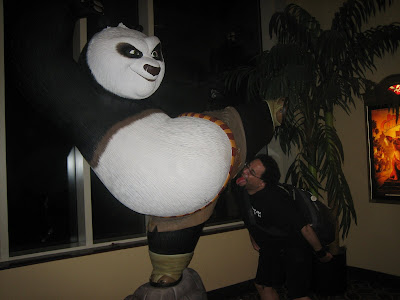 Huh. I had planned to give this one a wide berth. But if you say so, Bunche, I may go see it after all. Thanks, I think...

BTW, "cinematic Montezuma's Revenge" may be the most accurate summation of the last three Star Wars flicks I can imagine. Pure haiku genius, Buncho-san!

Thank you, Bunche! My friend Ben and I just saw Kung Fu Panda on YOUR recommendation, and it was one of the most flat-out entertaining movies I've seen (in a theatre) this year. (Iron Man stil wins that title, but nothing else comes close.) If it hadn't been for you, I'd have skipped it. Thanks! :)