FIST OF THE NORTH STAR CEL-ABRATION!!!

Having been a huge fan of the FIST OF THE NORTH STAR manga and anime since first discovering its gory chopsocky excellence during my third year of college (early 1985), I welcome any and all new items relating to it into the Vault of Buncheness — part of the never-ending influx that has turned my humble studio apartment into the final shot from RAIDERS OF THE LOST ARK — and my old friend Mark G. recently added a real gem to the collection.

For those not in the know, FIST OF THE NORTH STAR — hereafter referred to as FOTNS — is an epic post-apocalyptic saga of superhuman martial artistry and manly family dysfunction spiced with ludicrous dialogue, overwrought histrionics, and over-the-top gore and graphic violence, all initially aimed at the Japanese kiddie audience. However when the series debuted in 1983, the level of violence was considered extreme even by Japanese cultural standards, and there was considerable controversy over whether it was suitable for children. When the comics made the leap to serialized TV animation the spewing blood and entrails were largely rendered as oversaturated explosions of backlit white liquid, sort of looking like a Peter North-level cumshot gone fatally wrong, but that apparently satisfied the series' detractors and as a result the series and its laconic hero, Kenshiro, are still with us some twenty-five years later. There have been TV shows, movies, direct-to-DVD features, novels, toys, video games and spinoffs, as well as a recent resurgence in popularity, so the engine co-created by writer Borunson and Neal Adams-influenced illustrator Tetsuo Hara shows no sign of slowing down. The franchise's influence has been major, and the series is now considered a landmark. 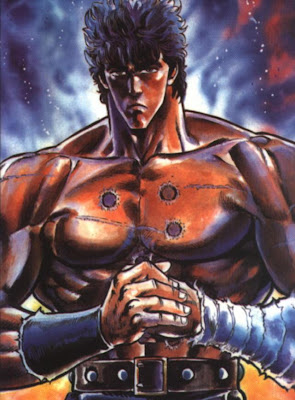 When I first discovered the anime version of FOTNS I was deep in my infamous early days as a perpetual stoner, and every month I would hit Manhattan's Tokyo Video to pick up an untranslated VHS tape of the latest four episodes, complete with often hilarious commercials, and run them for myself and my equally baked friends in my secluded basement suite as my bong merrily bubbled away. FOTNS proved to be a show that was fun for many reasons, chief among which was its blending of kung fu ass-whuppery and psychedelic gore and mystic auras emanated by the assorted combatants. It was pretty trippy stuff, even though the TV show's animation and character designs, especially when compared to Hara's original art, were pretty crappy.

So a while ago Mark began telling me he had a FOTNS-related surprise present for me, and he eventually mailed it to my work office. When I opened the package I found an actual animation cel from the show, and of Kenshiro himself, no less. I have another such cel from about thirteen years back, and while it depicts Ken ripping the living shit out of a bunch or evil militia-types with a spiked cudgel on a polearm, it shows him from the rear so his face is not visible. This cel, on the other hand... 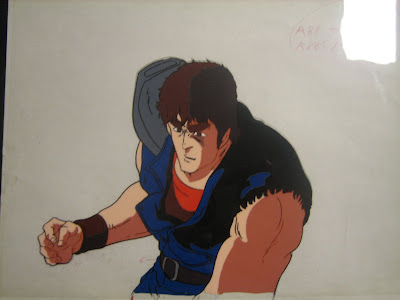 The acetate piece was laid over the original pencil art, and can be removed to show said pencil work. 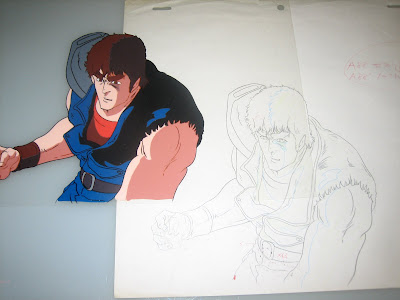 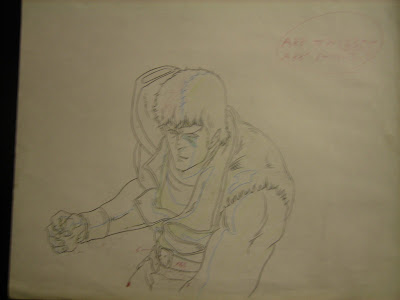 Obviously, I was quite pleased and contacted Mark to offer my heartfelt thanks. When I did I also asked him how he obtained the piece, and here's what he had to say:

Actually, there is kind of an interesting story behind it. Travel with me back in time, some 20+ years to 1986. I'm 15 years old, and at peak fanboy ripeness. ROBOTECH has just aired, and for someone who grew up watching BATTLE OF THE PLANETS and STAR BLAZERS, it really cemented my interest in something that was back then kind of obscure and fantastic, Japanese anime. This was way before the advent of the internet and a manga section in every Barnes and Noble's.

Being an anime fan back then required some work, something I'm sure you can attest to. One day at the old location of Forbidden Planet (how I miss that place), I came across a flyer for something called the New York Cartoon Fantasy Organization. On the 3rd Saturday of every month, some fans rented out the basement space of the Polish American Club on 56 St. Mark's Place and showed Japanese anime all day long. 5 bucks got you a day of imported cartoons. I was hooked. None of these were dubbed or subbed, and nobody cared. This was the real deal, raw on VHS from Japan anime, and we loved it. They would show a bunch of episodes of shows, followed by an intermission, and a feature in the afternoon. It was at the NY/CFO that I was introduced to so many of the great shows of what I really feel was anime's greatest period, the 80's. FIST OF THE NORTH STAR. THE DIRTY PAIR. URUSEI YATSURA. MOBILE SUIT GUNDAM. CAT’S EYE....the list goes on and on. Anyway, the little basement space had a guy in the back grilling burgers, and guys doing fan art, but the greatest bit was the dealer's table. The exchange rate was so favorable to the dollar back then, and these guys would go to Japan and score al kinds of merchandise and bring it back for sale. Posters, t-shirts, art books, and cels. The FIST OF THE NORTH STAR cel you now own comes from that dealer's room. Think I paid $15 for it. My personal greatest score there was a die cast miniature of Kaneda on his bike from AKIRA, also $15. I bought 2 and still have one mint in the box. The NY/CFO was a spinoff of the Cartoon Fantasy Organization founded in 1977 in California, still active today. Anyway, I'm glad you like the cel. I did nothing with it all those years, and I knew you'd enjoy it. I especially like the accompanying pencil art it came with. It's a production cel, actually used in the creation of an episode, so you now own 1/30th of one second of FIST OF THE NORTH STAR! Congrats!!

Needless to say, this unexpected act of Kindness earns Mark a place in my will. 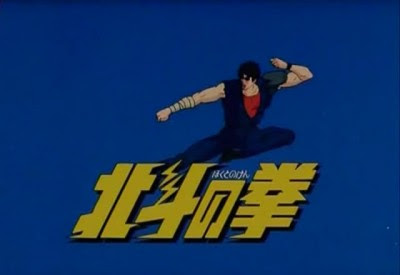