AN INTERESTING MEETING, O MY BROTHERS

Among other things I did this sweltering weekend, I covered the latest Big Apple Convention for the Beat (article to be finished and posted by tomorrow) and had the distinct pleasure of finally meeting my favorite actor for the past thirty years, namely Malcolm McDowell. I love the man's work for the intensity and edgy sense of danger he imbues his often unlikable characters with, perhaps most indelibly in two of the most controversial films ever unleashed across the big screen, A CLOCKWORK ORANGE (1971) and CALIGULA (1979) . His charming and sensitive portrayer of a time-traveling H.G. Wells is TIME AFTER TIME (1979) is also terrific and very well-loved by many, but in my opinion McDowell plays a fine and truly sinister villain when given the opportunity, and I have never been disappointed by him even when he appears in otherwise crappy films (the live action FIST OF THE NORTH STAR, anyone?).

Anyway, knowing McDowell was appearing at the con, I got there early in order to get a head start on what would inevitably be a long line for his autograph, and I was surprised to find that I was early enough to avoid the line altogether save for one ultra-flaming black fan, but more on him in a moment. I picked up four shots of him in the famous publicity shot for A CLOCKWORK ORANGE 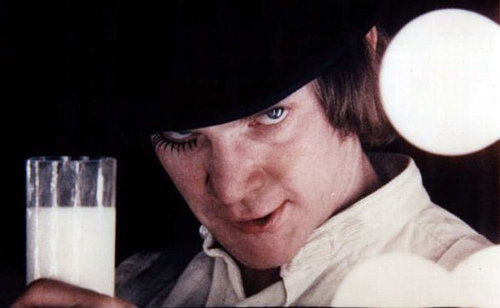 — one for me and three for friends who are also Malcolm freaks — as well as a shot of McDowell in full imperial regalia as Caligula, and waited my turn as the way-over-the-top fan ahead of me shrieked excitedly and asked, "What was Helen Mirren like?!!?" McDowell looked somewhat startled by the fan's manic demeanor, but he kept it together and politely answered, after which I approached him and told him how I'd admired his work for decades. I avoided discuss of either A CLOCKWORK ORANGE or CALIGULA since I'd heard lots of anecdotes on both of those films from film critics/historians, the filmmakers, and McDowell himself, so I instead asked him about the making of ROYAL FLASH (1975), the only film based on the lauded series of humorous historical novels by George MacDonald Frasier. McDowell told me there was discussion of a sequel but the film pretty much flopped, so so much fir the series. We discussed our mutual love of the Flashman series and McDowell expressed interest in seeing another attempt at the series, perhaps with Jude law in the role of towering asshole Harry Flashman (I bit my tongue at that one because, though I like Law, he'd have been just as physically miscast as McDowell since the character is described as being relatively strapping, a physically imposing counterpoint to his outright cowardice). He also revealed a couple of major spoiler for the upcoming run of HEROES, but I won't tell you about them in case you're a regular watcher (hint: there's a development with Nathan Petrelli, and the resurrection of...no, that would be telling). After that I bid him farewell and let the man get back to the business of signing, then went my merry way with an autographed shot of Caligula himself in my elated fanboyish hands. 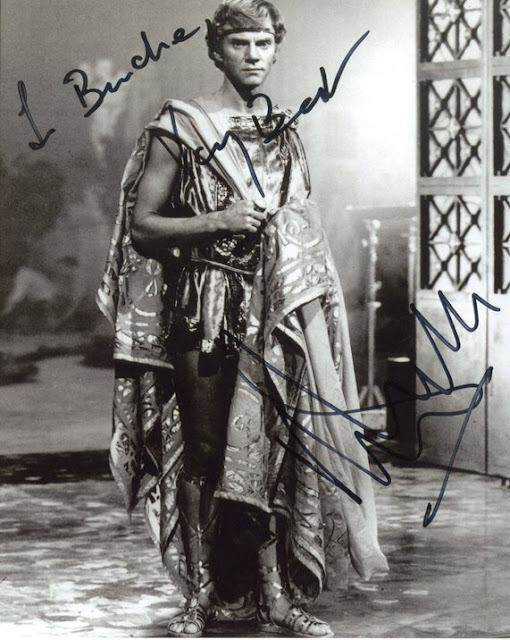 And though deeply mired in the between-paychecks/just-paid-the-rent semi-poverty that happens all too frequently, I returned the next day and shelled out the cash to be photographed with the Malc. I figured why the hell not? How often would I have the opportunity to have my picture taken with my favorite actor? I never had the chance to meet Toshiro Mifune, much less get my picture taken with him, so there was no fucking way I'd miss out on this moment. And while waiting on line to get the photo taken, I managed snap a shot of a fun moment of unexpected geekery, seen below. 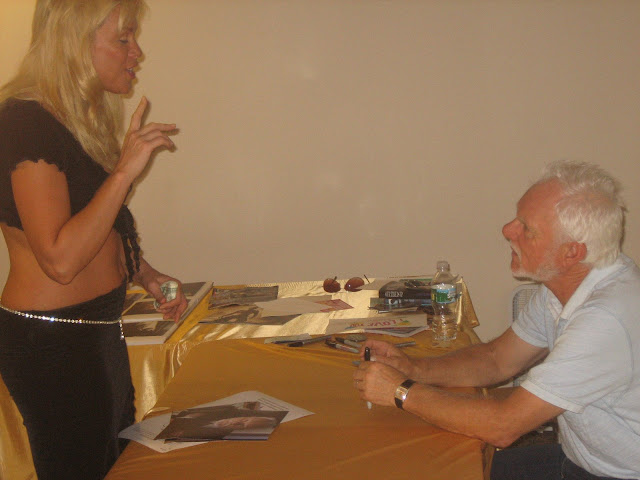 Just before the photo-op, Chase Masterson, known to us Trek goons as Leeta the dabo girl on STAR TREK: DEEP SPACE NINE, sauntered up to McDowell and, clearly fahrklempt, identified herself as being from STAR TREK as well as a huge fan of his work. McDowell expressed his thanks for her kind words, but really came to life when she told him she played the girlfriend of a cast member who knew him, specifically Siddig El-Fadil (later changed to Alexander Siddig), aka Dr. Julian Bashir, the space station's resident physician. "Sid!!!," exclaimed McDowell, "He's my nephew!" After that it was a total love-fest. Quite sweet, actually. And not that you can tell from this hastily-taken shot, but Miss Masterson has an utterly stunning and downright biteable ass; the badonkadonk as she walked off caused many a head to turn, and my thoughts rocketed straight into the gutter.

And then I got my photo taken with the king of the droogs. 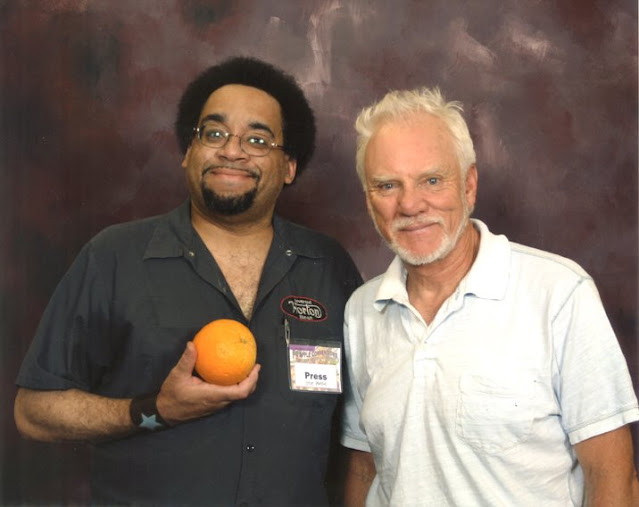 So thanks, Malcom, for all the great performances and demonstrating that not all actors are douchebags. May you continue to rule for a very, very long time, and I mean that from the bottom of my heart.
Posted by Bunche (pop culture ronin) at Monday, June 09, 2008

Labels: BRUSHES WITH GREATNESS, GEEKIN' OUT

I too am a major Malcom fan (including Cat People and If...) What a treat meeting the man himself. A star! Do you remember his unforgettable performance in the Swatstika underpants in The Passage or maybe his culinery skills when torturing? 'chop, chop!' indeed! Those scenes have been seered into my head since I first saw them as a very young boy and made me the man I am today! ;)

Great picture of you two. Thanks for sharing your story and I totally understand digging into your poverty pocket and spending the money on a once in lifetime moment. I would have done the same thing. - Cristina

You Jerk! Not only did you meet Malcom McDowell but you also got a good look at Leeta!?! Dammit!!!!