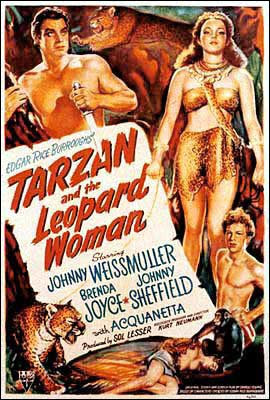 "If an animal can act like a man, why not a man like an animal?"
-Tarzan, surprisingly not describing himself.

Intended to be serious, TARZAN AND THE LEOPARD WOMAN is a grandly entertaining flick that you'd swear was a parody of the genre if you didn't know for a fact that it wasn't. It's fast-paced, loaded with overripe scenery chewing — you know you're in trouble when Johnny Weissmuller as the monosyllabic Tarzan is the most normal character — , features a rare female villain, and includes a tribe of white-ish killers who dress up in leopard drag and dance around like Twyla Tharp on a fistful of Bennies (a Tarzan movie with no bruthas? What the fuck???).

When travelers and merchants departing from Zambezi are waylaid and torn to shreds by what appear to be hordes of leopards, the local commissioner asks Tarzan, who just so happens to be in town while this is going down, to investigate. Being the lifelong jungle dude that he is, Tarzan immediately realizes that the violence is not the work of his wild colleagues, but is actually the work of crazed leopard men, servants of the evil Queen Lea (played by, get this, "Aquanetta," nee Mildred Davenport, best remembered for this role and her classic B-monster part in CAPTIVE WILD WOMAN (1943) and Ameer Lazar (Edgar Barrier; who?), her Western-educated lover and right hand man. 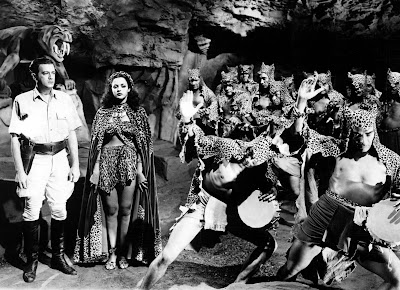 The Leopard Men: gettin' down and lookin' fabulous.
Also involved is the queen's ratbag of a little brother, Kimba (Tommy Cook, turning in an over-top-performance if ever I saw one), who seeks to earn his place among the leopard-warrior ranks by ripping out Jane's heart as a rite of passage, and Boy (Johnny Sheffield) must sort that shit out before he's rendered motherless for a second time (long story; I'll get around to TARZAN FINDS A SON soon). Anyway, there's much ass-whuppin' and unintentional camp insanity to be had here, so I'd probably recommend TARZAN AND THE LEOPARD WOMAN as the most balls-out entertaining of the post-MGM run. No joke, while watching this movie the other night I seriously contemplated getting a bunch of friends together to wander about in the annual Halloween craziness in the West Village as a gaggle of leopard cultists in the cheesiest costumes possible, complete with one of the girls in my crew as Queen Lea, and my skinny pal Hughes in a loincloth. TRUST YER BUNCHE and don't miss this one when next it turns up on Turner Classic Movies! 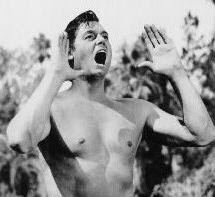