THROUGH BEING COOL: DEVO SUES McDONALD'S OVER HAPPY MEAL TOY 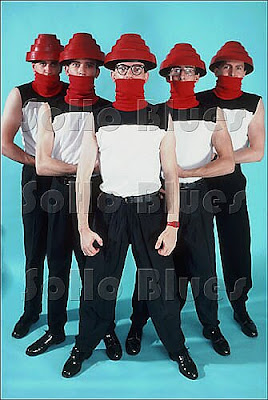 Note to Mickey Dee's: don't fuck with the Smart Patrol.

A couple of months ago I posted about unexpectedly finding a McDonald's Happy Meal toy related to the heinous AMERICAN IDOL and dubbed "New Wave Nigel" and how it was blatantly obvious it was based on the famous "Energy Dome" look sported by Devo beginning with their 1980 FREEDOM OF CHOICE album and tour. Well, now it looks like the Spud Boys aren't taking it up the ass from the fast food corporation ripoff artists and are suing them for copyright infringement. This piece of news makes my day, and this news comes mere hours before I see Devo perform in a Brooklyn swimming pool (more on that after it happens). Anyway, here's what ChartAttack.com had on this, and thanks to Scraps for the heads-up:

You know those red flower pot hats that Devo wear on their heads? They're now the centre of a lawsuit involving the band and McDonald's.

McDonald's introduced a line of American Idol Happy Meal toys in April. The set of dolls focused on particular musical genres. If you bought a Happy Meal, you could get Disco Dave, Country Clay, Rockin' Riley, Soulful Selma or… New Wave Nigel. The latter doll sports an orange jumpsuit, pink sunglasses and… a flower pot hat.

Devo's "Energy Dome" hat, designed by bassist Gerald Casale, is apparently copyrighted and trademarked. Devo discovered that McDonald's were selling the doll, which also plays a "Devo-esque song" that they say "sounds a bit like a mutated version of Devo's 'Doctor Detroit.'" Devo have posted a video of the little doll in action on their website. They were pretty offended and they've taken legal action against the fast food behemoth. 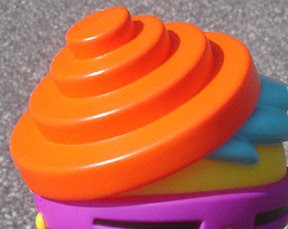 "They didn't ask us anything," Casale told Australian Associated Press. "Plus, we don't like McDonald's, and we don't like American Idol, so we're doubly offended."

Devo first began wearing the flower pot-resembling Energy Dome hats when they released their Freedom Of Choice album in 1980. Devo sell Energy Domes through their Club Devo site. The band have also worn the hats in numerous commercials over the years. Considering the Energy Dome was originally a form of social criticism that mocked industrial and consumer culture, Casale told AAP he finds it ironic that McDonald's has used it.

"The very same people that wanted nothing to do with Devo and looked down on Devo and condescended (to) Devo... enough time's gone by that they go, 'Hey, you know those guys are synonymous with what was new about new wave,"' Casale said. "'So if we're going to do New Wave Nigel, what do people recognize iconically better than Devo and the red hat?'"