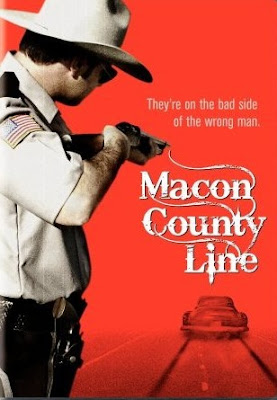 After having heard about how great MACON COUNTY LINE is and how it’s one of the undisputed classics of the 1970’s drive-in/”hicksploitation” genre, I finally saw it for myself and was quite surprised by a few things. First off, for years I was convinced that I’d seen it but I now realize I hadn’t, and in fact I think I confused it with one of its many subsequent imitators or fused it in my memories with some other bit of cornpone exploitation; the film I remember seeing opened just like MACON COUNTY LINE, specifically with the title being seen over a freeze-frame of a fleeing, bare-assed guy as Lavern Baker’s timeless rendition of “Jim Dandy” is heard on the soundtrack, 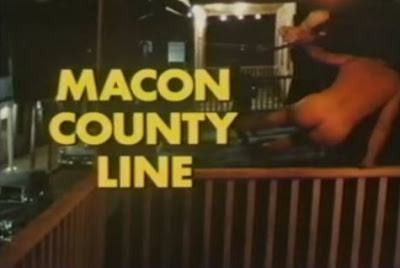 but for some reason I recall the version of “Jim Dandy” in the film I thought I saw as being the ultra-redneck cover done by Black Oak Arkansas. After that I just recall pretty much a feature length nighttime car chase down some backwater road featuring two scared-shitless fifties “J.D.” types pursued at high speed by a crazed sheriff who took potshots at them with a pump-action shotgun while his deputy handled the driving chores. I have no memory of why the cop was after the two teenagers, but there was definitely a sense that the cop was an insane control freak who had it in his head that those Yankee sunsabitches had done something out of line within his jurisdiction, and he simply wasn’t having it. That’s kinda/sorta the plot for MACON COUNTY LINE, but I enjoyed my garbled recollections more than the actual movie and am at a loss to explain why it’s considered a classic.

The film takes places in 1954 and introduces viewers to the Dixon brothers, Chris and Wayne (played by real-life sibs Alan and Jesse Vint), two rakehell lads who epitomize the old “free, white, and twenty-one” spirit of the pre-Civil Rights era, and drops us right into the tail end of their two-week spree of fun and pussy-hunting before they head off for military service. They’re about as likable as a pair of don’t-give-a-shit characters can be, but they both display a casual disregard for the law as evidenced by their gleeful tactics of dining and dashing, stealing money from a whore (after Chris fucks her while making her bark like a dog, easily the funniest scene in the movie), and evading two cops while simultaneously totaling their squad cars, as well as the revelation of being lifelong troublemakers and that their signing up for the military was the only option for Chris as an alternative to being sent up the river for a petty crime (we never know he’s found guilty of, but it’s alluded to that it may be statutory rape), so Wayne joined up with him so his little brother won’t have to go it alone. During the course of their adventures they pick up blonde Texan hitchhiker Jenny (Cheryl Scott) and eventually cross the Macon County line from Louisiana into Georgia, thus setting up the tragedy to come.

Once in Georgia, the gang’s car suffers automotive distress and they pull over to a gas station in the middle of nowhere to get a new distributor cap. While waiting for the live action version of THE SIMPSONS’ Cletus the Slack-jawed Yokel to effect repairs, they meet walking NRA advertisement and control freak Sheriff Reed Morgan, played by Max Baer, Jr., best known for his immortal portrayal of eternally sunny and rather dim Jethro Beaudine on THE BEVERLY HILLBILLIES television series (1962-1971). The sheriff, always polite but betraying a hint of ominous menace, questions the unfamiliar trio, demanding to see identification and informing them that unless they have thirty bucks between them they’ll be considered vagrants. Having made his point — a display of territorial pissing if ever there was one — the sheriff drives off to pick up his ten-year-old son (Leif Garrett) from military school, unaware that two petty criminals have broken into his house, stolen assorted property, and raped and murdered his adoring wife (Joan Blackman). The crooks get pulled over by some other local cops, and once the stolen loot is noticed in the back seat the situation escalates into a double cop-killing, but the criminals are eventually captured. Meanwhile, our heroes have once more hit the road, but their car once more breaks down, forcing the trio to camp out…just across the way from Sheriff Morgan’s house, right when he arrives home to discover his wife’s bloody corpse. The sheriff and his son both lose it, the kid collapsing into a weepy, catatonic state, while his father spies the trio’s car and incorrectly assumes they’re the culprits. Arming himself to the teeth, the sheriff goes after the trio with guns a-blazin’, and the whole mess culminates with a pile of bodies and a terrific twist that comes seemingly from out of nowhere.

• The movie clocks in at 88 minutes and the actual conflict between the sheriff and the innocent travelers doesn’t actually occur until roughly the last twenty minutes, by which time I had checked my watch more than once. And when the shit finally does go down, there’s no chase since the trio’s car has broken down; the trio holes up in an empty houseboat, so they’re stuck there waiting for the sheriff to pick them off.

• There were several times when I found myself wondering if the movie even had an editor; during the film’s 88 minutes, much of the running time is spent on endless sequences meant to drive home a feeling of local color but those segments just drag on interminably, and the attempts at humor lay there like a dead raccoon. Except for the bit with the barking whore.

• The heroes’ mischievous nature is meant to be endearing, but their assholish and potentially dangerous behavior toward others was off-putting. The only reason I sympathized with them at all during the sheriff’s crazed meltdown was because I knew they were innocent of the crime, and while they deserved some sort of comeuppance for their earlier transgressions, they certainly didn’t warrant cold-blooded execution at the hands of Jethro Beaudine.

• The wholly gratuitous sex scene between Chris and Jenny brings the movie to a complete halt and does nothing whatsoever to advance the plot, offering a small helping of the nudity that was more or less mandatory for exploitation fare of the period. You simply will not care when the sequence begins, and may even fast-forward through it like I did.

• While we come to know and like the Dixon brothers as a kind of lower-rent Duke Boys (only minus the bows-and-arrows and the General Lee), Jenny is a cipher of a character who’s there only so there can be a female among the heroes, and a female that you just know will eventually get naked for reasons previously discussed. I found her utterly superfluous to the story and genuinely feel the film would have benefited immensely from her total non-inclusion; the only suspense that Jenny’s presence could have generated would have been the possibility of her getting raped by the crazed sheriff, but while he was crazed over the death of his wife, he wasn’t that crazy. That particular female element in hicksploitation would later be famously immortalized in the far superior JACKSON COUNTY JAIL (1976).

But while I found MACON COUNTY LINE to be a vastly overrated disappointment, I was intrigued by Max Baer, Jr’s portrayal of Sheriff Morgan. In sequences not dealing with his harassment of the innocent trio, Morgan is seen as a devoted family man who has a friendly rapport with the citizens of his town, and longs for nothing more than to spend quality time with his son. Far from the psycho cop he’s often described as, Morgan is all too understandably human, control freak flaws and all, and I found it impossible to hate the guy, even when it’s revealed that he’d rather his son not associate with the black kids who play basketball across the street from the military school; Morgan’s racism comes across not as the stereotypical burning hatred usually found in a southern-fried exploitation flick, but rather as the result of being a product of his time, culture, and the accepted status quo. His explanation of his views on the subject to his son is more segregationist than flagrant “lynch them goddamned niggers” bigotry, and considering the tropes common to this genre that comes as a surprise since exploitation filmmakers certainly never had any problem with creating outright, moustache-twirling villains of the vilest order; the quintessential example of a balls-out psychotic racist asshole villain would undoubtedly be William Sanderson’s incredible Jesse Lee Kane in FIGHT FOR YOUR LIFE (1977), and when compared to him Sheriff Morgan is certainly no villain. A hardassed control freak driven to violence by irrational grief, yes, but a villain per se? I don’t think so.

There’s been a lot of misleading stuff written about MACON COUNTY LINE over the years that paints the film as considerably more than it is, and as a curious student of the grindhouse/drive-in genre you may be intrigued by its rep, but bear in mind that much of its legend may be heavily colored by fond nostalgia, and that’s why the ready availability of such oft-cited “classics” on DVD can be the genre’s own worst enemy. Seeing is definitely not always believing, so TRUST YER BUNCHE and approach this one with no expectations if you feel you absolutely must see one of the perceived landmarks of hicksploitation pantheon. 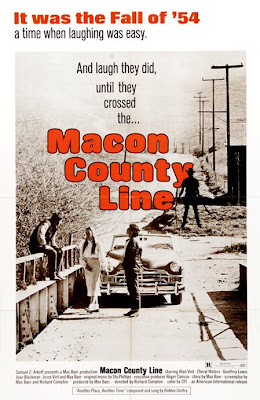