BY ALL THE GODS OF CINEMA, PLEASE LET THIS HAPPEN!!! 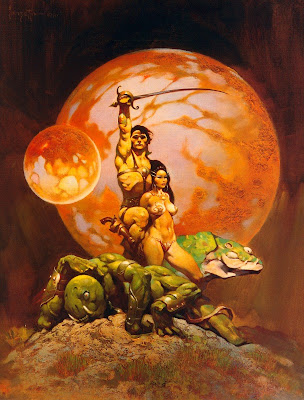 It looks like old school pulp hero John Carter of Mars is going to finally get the big screen treatment his adventures so richly deserve, and it's in the more-than-capable hands of the cinematic wizards over at Pixar. Being a lifelong Edgar Rice Burroughs fan, the news found here couldn't have made me happier unless there were an announcement of one-hundred percent faithful adaptation of the first five Tarzan getting a big-budget green light with a kickass director and scripter helming the bloody things.

The one question I have is how scantily-clad the filmmakers are going to allow the characters to be depicted and still allow for a sub-R rating. Burrough's Martian — "Barsoomian" to us geeks — adventures are rollicking tales that blend swashbuckling warrior cultures and pulp-style super-science, and the characters basically run around naked save for adornments such as jewelery or belts and baldrics that allow them to carry swords and other assorted weapons, and not even the legendary Frank Frazetta would have been able to accurately depict John Carter kangarooing about in the planet's lesser gravity with his nutsack bobbing around like a turkey's wattle, or any of the nude and exotic females in the stories, most notably the exquisite Dejah Thoris, a Barsoomian princess who becomes Carter's wife. And unlike some authors' descriptions of their heroines as being merely decked out in the kind of fantasy gear commonly found in paintings by both Frazetta and his perceived rival Boris ("Bore-is") Vallejo, Burroughs made absolutely no bones about exactly what Dejah Thoris looked like, as evidenced in this passage from the first Barsoom story, A PRINCESS OF MARS (1912):

And the sight which met my eyes was that of a slender, girlish figure, similar in every detail to the earthly women of my past life... Her face was oval and beautiful in the extreme, her every feature was finely chiseled and exquisite, her eyes large and lustrous and her head surmounted by a mass of coal black, waving hair, caught loosely into a strange yet becoming coiffure. Her skin was of a light reddish copper color, against which the crimson glow of her cheeks and the ruby of her beautifully molded lips shone with a strangely enhancing effect.

She was as destitute of clothes as the green Martians who accompanied her; indeed, save for her highly wrought ornaments she was entirely naked, nor could any apparel have enhanced the beauty of her perfect and symmetrical figure.

A naked, dusky brunette beauty? Sounds like my kind of gal, and she also apparently appeals to uber-talented cartoonist and fellow Burroughs goon Frank Cho. When he draws scenes from the Carter books he makes sure the characters are running about as starkers as the given publication will allow, and gives special attention to the princess. I mean, check these out: 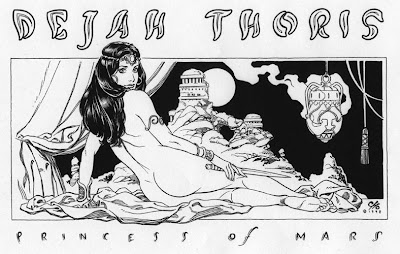 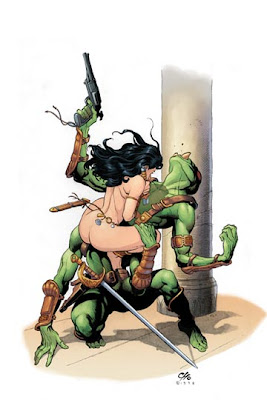 They obviously won't go there with the nudity, but I hope it's as close to just skin as allowable within a PG-13 film. But whatever, any John Carter — and Dejah Thoris — on the big screen is better than nothing at all.
Posted by Bunche (pop culture ronin) at Monday, June 09, 2008

Oh dear God please let it be so! And from Pixar no less!