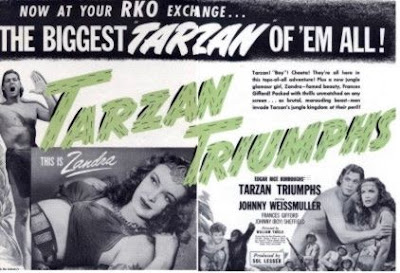 How can you not smile from ear to ear at the mere thought of a film best summed up as "Tarzan kicks Nazi ass?"

TARZAN TRIUMPHS was the first of the Johnny Weissmuller apeman flicks made after Maureen O'Sullivan decided to ditch the Jane role once and for all, after which MGM lost interest in the series (among other reasons, including feeling Weissmuller was too old to still be playing Tarzan); to be fair, O'Sullivan's Jane was inarguably one of the chief reason's for the series success, and there has not been a Jane since who was anywhere near as good as she was, so I can understand MGM saying, "Well, so much for that." But once MGM dropped the jungle lord, producer Sol Lesser and RKO were there to offer him a new vine. The RKO Tarzan flicks lacked the budget and grandeur of the MGM run, but they hit the ground running and offered some of the liveliest entries in the genre. And once O'Sullivan was out of the picture, the Tarzan series focused less on the three-person family unit and turned its attention to the charming father and son relationship of Tarzan (Johnny Weissmuller) and his adopted offspring, Boy (Johnny Sheffield), one of the few kid sidekicks who was never an annoying little douche. Unlike the intent stated in the creation of Robin the Boy Wonder, namely that kids would like to accompany a hero like Batman rather than be Batman, I always thought Boy was pretty cool, and what kid wouldn't want Tarzan — especially Weissmuller's Tarzan — to be his dad? Much is made of what a great pair Tarzan and Boy are, and Jane's absence is explained away by having her caring for her ailing mother in England.

The plot here is really kind of incidental, but all you need to know is that a bunch of Nazi assholes take over the lost city of Pallandria in an effort to rob them of their metal and oil resources. The princess of Pallandria, a hot brunette named Zandra (Frances Gifford) escapes and begs Tarzan to help her people and kick some Nazi ass, but Tarzan's attitude basically amounts to him not wanting to get involved because "strangers always bring trouble" and his expressed feeling that if nobody fucks with and his, he won't fuck with them. Period. Plus, thanks to an earlier letter from Jane (read aloud by Boy), Tarzan knows about the evils of the Nazis and war, and flatly states that he doesn't understand "civilized" man's need to kill each other. But Zandra and Boy are relentless in their attempts at swaying Tarzan, even going so far as to dress Zandra up in Jane's signature jungle shift and have her go swimming with the lonely and Jane-sick apeman; that's more fucked up than it sounds because the Tarzan and Jane swimming scenes, though quite chaste — or not, as anyone who's seen the nude romp in TARZAN AND HIS MATE (1934) will attest — , are symbolic of their obvious intimacy and sexual attraction to each other. Fucking around like that with Tarzan's emotions didn't sit well with me, and Tarzan wasn't too keen on it either, once he twigged to what was going on. 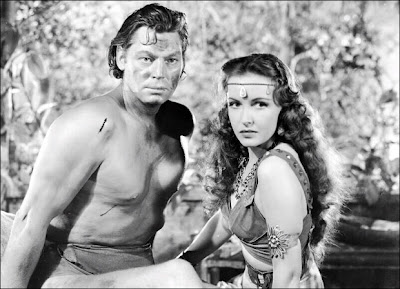 Tarzan and Zandra.
Finally admitting defeat, Boy and Zandra set off to the lost city on their own, but a downed Nazi pilot that Tarzan had rescued tries to kill Boy. The lad's death is averted with the aid of series regular Buli the elephant, who picks up the Sieg Heiler and chucks him off the top of the Mutier escarpment, adding insult to injury by dumping a huge fucking boulder on his ass for good measure. Boy nonetheless gets kidnapped by other Nazi swine and Tarzan finally is motivated to kick ass, grabbing his knife and glaring into the camera while declaring, "Now Tarzan make war!!!" Obviously I don't need to tell you what happens next, although I do urge you to stick around for the hilariously stupid coda in which Cheeta the chimp contacts Germany via radio and is mistaken for Der Fuhrer. 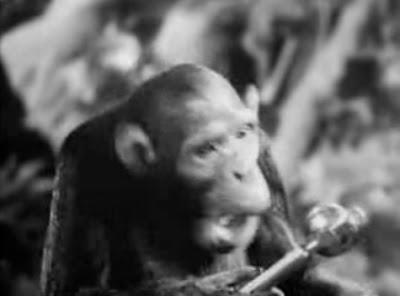 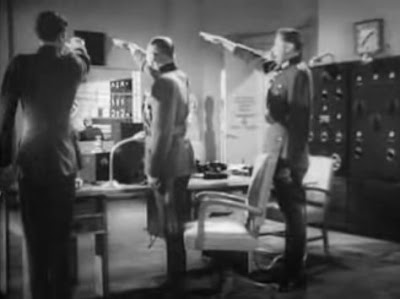 Not in those exact words, but seriously! We get German officers saluting a goddamned chimp, for fuck's sake! It's not as funny/offensive as Mantan Moreland mistaking Cheeta for a "colored boy" in TARZAN'S NEW YORK ADVENTURE (1942), but I'll take what I can get.
Great fun from start to finish, TARZAN TRIUMPHS is a kiddie film to be reckoned with and should be checked out by all fans of Saturday afternoon matinee thrills. And if I'd made the sumbitch, you can bet your ass that I would have had a scene in there in which Tarzan swam to Berlin with his knife clenched between his teeth, strolled straight into the Reichstag, and kicked Schickelgruber square in the batch before cutting off his head and using it to feed the "cannibal fish" back home. Woulda been awesome!
Posted by Bunche (pop culture ronin) at Wednesday, June 18, 2008