In less than twenty-four hours I will turn forty-three, thereby ending my year as a representative if the Answer to Life, the Universe, and Everything. Forty-two was an onaky year, but I'm hoping forty-three will be even better. In order to get things off to a good start I took today and tomorrow off from the design 'ho house and gave myself a four-day weekend in which things get off to a rockin' start with tonight's Devo show out in Greenpoint, then tomorrow I'll head out to New Hyde Park to get a head start on the cooking for Saturday's 18th (!!!) annual BuncheCat Birthday Barbecue Loooooooove Sensation. It's a pretty full plate, and the fun really got started this morning when, in my capacity as a Journalist for Publishers Weekly, I got to interview one of my favorite creative talents, namely Gilbert Shelton, a laid-back sixty-eight-year-old Texan now living in Paris, who happens to be the loony mind behind Wonder Warthog and the Fabulous Furry Freak Brothers, two landmarks in the history of what used to be called underground comics. 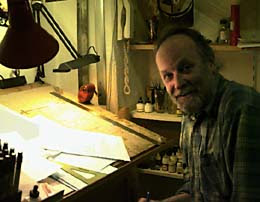 Wonder Warthog was an uber-silly exploration of superheroics, while the Freak Brothers formed the template for stoner humor, predating the antics of Cheech & Chong by a couple of years, and both works had a profound influence on me when I discovered them in a musty box in the back of Fairfield, Connecticut's Bookfinder used book store. The somewhat shady proprietor didn't give a fuck what he sold to kids as long as he made a quick buck from them, and as result I ended up with an impressive library of classic, ultra-filthy undergrounds starting at the age of thirteen. 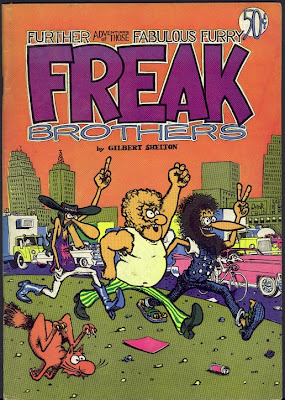 I called Shelton at his Paris studio and we shot the shit on a variety of topics, including his influences and current projects like the upcoming 684-page Freak Brothers Omnibus, as well as the Freak Brothers stop-motion animated film that's currently seeking funding, and I intend to have the piece up on the PW Comics Week site by Monday. I'd met Shelton three years ago at the UK's Bristol Con and found him charming then, but talking to the guy at length was some of the most fun I've had while interviewing a comics celeb.

Anyway, I'll keep you posted, but now I'm off to drop off laundry and run errands before the events of the birthday weekend get underway. I'll post a full report late on Monday, so 'til then, "Ta!"
Posted by Bunche (pop culture ronin) at Thursday, June 26, 2008

Dude I had no idea that this was coming up and now that it has passed I send you a righteous Hails and High Horns in honor of the day of your birth. We must endeavor to meet up soon for a late celebration. Keep on rocking Buncheman.