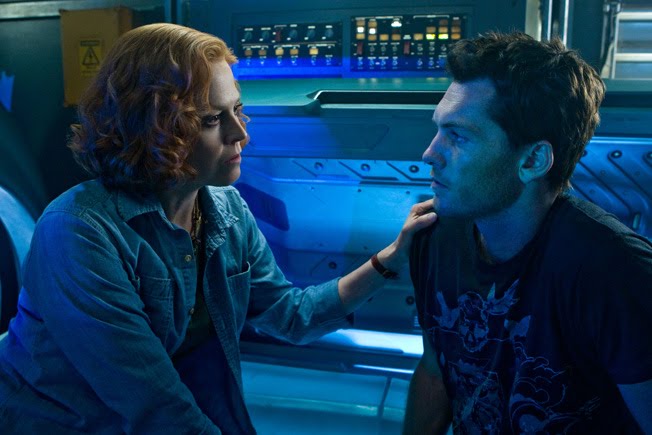 "Sully, once I put our brains into genetically-engineered avatar bodies, we will walk among the planet's natives and make sweet love to them. But first, how about a practice run, right here in the lab?" (CUE WAKKA- JAWAKA GUITAR)

Hewing close to director James Cameron's basic concept but shifting the character focus, my filthy AVATAR would be about the doctor who came up with the Avatar Program rather than the paraplegic soldier. This time around, the good doctor — hopefully to be portrayed by an actress with the nom de porn "So-Horny Beaver" — creates the Avatar Program with the intention of fulfilling her long-held dream of seeking out new alien life forms (in this case the "Noo'kee"), transmitting her brain into a gene-spliced blend of human and indigenous alien DNA, walking among the aliens in a form that's familiar to them, and subsequently fucking the living shit out of them. She would be accompanied on this noble quest by a team also kitted up with wearable, fully-functional alien bodies, therefore allowing for more characters than just her to get into the action. And since this would be a "feel good" porno that would play directly on the fantasies of many sci-fi geeks of either gender, this setup allows for the aliens to get fucked by humans, but not get "fucked" by humans, if you get what I mean. Yes, the good doctor would be forging a link of understanding and good will between the species with a scientifically-crafted vaginal avatar, or VAGITAR for short, which would also serve as the title. (Or maybe even JAMES CUMERON'S VAGITAR, or would that be overkill?) And the budget for this opus would be however much it would cost to buy blue body paint for a cast of maybe ten people, some cheap caveman/jungle girl gear from the local costume shop, styrofoam and silver paint for simulating "futuristic" lab and spaceship sets, maybe a dozen potted plants to create the alien planet's forest look, and a foam prop with a posable wire core for the scene where the heroine pleasures a girl from the alien tribe using her prehensile tail, so we're talking maybe $2000 if we hire some game amateurs for the cast. It's a guaranteed hit and will go on to make more money than all six STAR WARS movies combined. You mark my words!
Posted by Bunche (pop culture ronin) at Wednesday, December 30, 2009

Surely they'll fit in a joke about "Pandora's Box" somewhere...

But I want a co-producer's credit and the opportunity to "help" with the casting process.

Jim, considering your eye for tall chicks and the fact that the aliens in AVATAR average around ten feet in height, you are officially named as casting director.

I'd like to place my order for an advanced copy, please.

I'm all for it, regardless...bring on the nerd/geek interspecies sex!