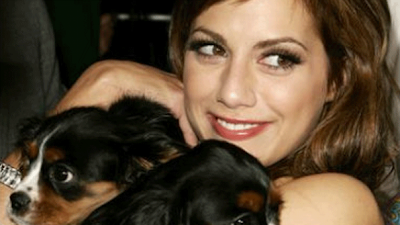 After suffering a cardiac arrest while in the shower, actress Britanny Murphy is dead at the way too early age of 32.

First garnering attention for her role in CLUELESS (1995), she won a place in my heart as the voice of pathetic, dim-witted but sincere evangelical Luanne Platter on the long running animated primetime series KING OF THE HILL (1997-2009), and among a cast heavily populated with memorable characters, Luanne was perhaps the most human of the lot.

Luanne and two of the Manger babies, Hosea the cat and Sir Reginald Featherbottom the Third.

Luanne's brain-dead white trash misadventures were many, but she was a well-meaning soul who even sought to impart good Christian values to children via the staggeringly absurd puppet show "The Manger babies," a recurring bit that never failed to make me laugh my ass off. Murphy appeared in many other roles, but it is for Luanne that I wager she'll be best remembered. 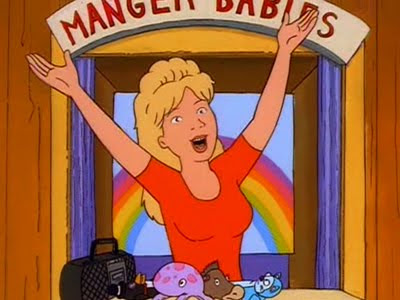 "You know, at the beauty academy they teach us that people aren't black or white or yellow or red, but their hair can be."
-Luanne Platter
Posted by Bunche (pop culture ronin) at Monday, December 21, 2009