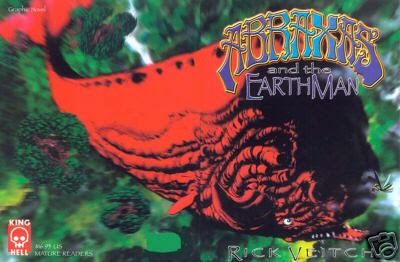 Rick Veitch has been one of my favorite creators of comics for nearly three decades, his work being flavored with a heavy duty psychedelic edge that's simultaneously lysergically wondrous and scary as a motherfucker, a storytelling style born out of the underground spirit and visceral kick in the balls of that genre, only without the frequently incoherent vulgarity found therein. His stories explore humanity on many levels, often presenting challenging observations tarted up in the drag of the fantastic to make his messages that much more vivid, each a visual and intellectual feast that is truly epic in the truest sense of the term, and no work of his exemplifies that better than the stunning ABRAXAS AND THE EARTHMAN, now finally available in a beautiful trade paperback. I would have preferred a hardcover, but fuck it, I'll take what I can get! 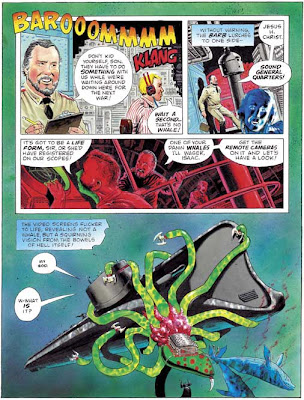 Cetologist John Isaac is shanghaied from a naval research mission and, along with the submarine’s commanding officer, is thrust into the thick of mad Captain Rotwang’s interstellar vendetta against Abraxas, a spacefaring crimson leviathan who cost the captain his leg and, arguably, much of his sanity. As both earthmen are put through horrific physical alterations, Issac discovers to his shock — and dawning fascination — that he may be the nexus between humankind and a great cosmic truth of staggering proportions. 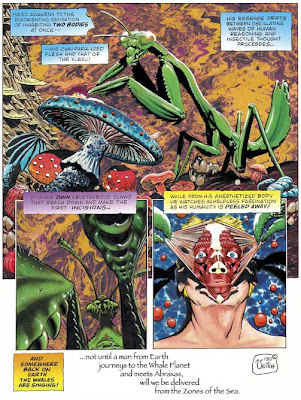 A lush and thought-proving narrative seamlessly expressed through a script that veers between extremes of wide-eyed wonder and outright horror, coupled with illustrations that verge on the palpable, this volume could not come more highly recommended. Comics seldom get this good, and if you don't like what sometimes comes off as hippy-dippy self-indulgence, get over it. Veitch may have gone on to what some would call bigger and better works, but the fucksticks who think that can kiss my big beige ass; ABRAXAS AND THE EARTHMAN is Veitch's masterpiece and I would give my left arm to see a lovingly faithful big screen adaptation while out of my mind on a Ziploc bag full or righteous trip-fungus.
Posted by Bunche (pop culture ronin) at Sunday, December 13, 2009