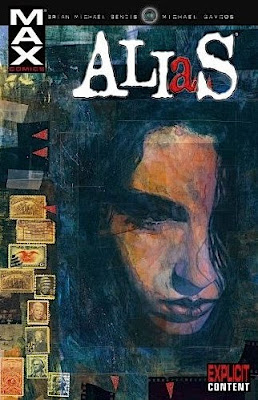 While tidying up here in the Vault a few weeks ago, I unearthed this hardcover doorstop of a book and paused to re-read it over a few days.

Having nothing whatsoever to do with the TV series of the same name, this volume collects the complete twenty-eight-issue run of the inaugural title in Marvel’s adult-oriented MAX line. The series follows the daily goings-on in the life of private investigator Jessica Jones, a former super-hero who got out of the heroics-in-tights biz because she realized she didn’t have the right stuff to make in the Marvel Universe. Occasional displays of her rather meager super-powers (flight, super strength) aside, this detective series is really about getting into the head of the protagonist, and Jessica is the most realistically written neurotic female character that I have had the pleasure to read in quite some time. As the series unfolds, the reader sees the world through Jessica’s eyes, and she is one sad critter indeed; the chick is a borderline alcoholic, saltily profane, indiscriminately promiscuous — the series practically opens with a shocking scene of a very drunk Jessica getting boned up the ass by none other than Luke Cage, Hero For Hire — and harbors a deep-seated guilt that forms the core of her self-destructiveness. Yet what could have been an utterly unappealing character becomes an individual that the reader gets quite involved with, and I enjoyed this book so much that I went out and picked up the first two collected volumes of the non-adult followup series, THE PULSE, in which Jessica joins the staff of the Daily Bugle. The one drawback to the ALIAS whole thing is that a lot of what makes this book fun depends on a pretty thorough working knowledge of the Marvel Universe from roughly 1961 through the present; there’s a great scene involving Daredevil in his civilian identity using his hyper-senses, and if the reader doesn’t know who he is the gag is totally lost. That one narrative caveat aside, the one gripe I have is that the omnibus edition is out of print and currently fetches outrageous prices on Amazon, so if you do decide to pick track it down I suggest looking anywhere but there.
Posted by Bunche (pop culture ronin) at Saturday, December 12, 2009