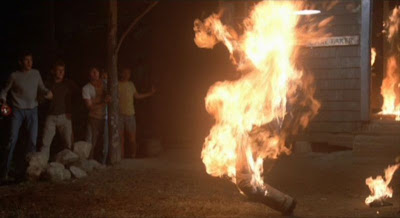 There used to be a camp not far from here, just across the lake. It was called Camp Blackfoot. No one goes there anymore. Everything burnt down. This camp had a caretaker, and his name was Cropsy. Now, this Cropsy was a drunkard... a sadist, and he got real pleasure out of hurting... scaring. And he had these garden shears. The kind with long, thin blades. He carried them all the time, wherever he went. And he had this kind of demonic way of looking at you. One time, Cropsy really went after this kid from Brooklyn, followed him around night and day. He made this kid's life a living hell. But this time, he chose the wrong guy, 'cause the kid and some of his buddies had planned a little prank. Only problem was, the gag went wrong. The next thing anybody knows, Cropsy's trapped alive and burning in his bunk. They try to get him out, but the fire's so fierce, they can't reach him. All they can do is stand outside and listen to him cry out in agony. They say his smashed his way through the bunk room door in just a mass of flames. And as he burned alive, he cried out, "I will return! I will have my revenge!" They never found his body, but he survived. He lives on whatever he can catch. Eats them raw, alive. No longer human. Right now, he's out there. Watching, waiting. Don't look; he'll see you. Don't move; he'll hear you. Don't breathe; you're dead!

-The legend of Cropsy, as retold in THE BURNING

Those of us who are of a certain age no doubt recall (fondly or not) the age of the "slasher" movie, a period in our youths that enjoyed a heyday between roughly 1980 and 1984. The genre was kick-started by the unexpected success of the independently shot, major studio released FRIDAY THE THIRTEEN (1980) and from that cheap and gory template exploded a seeming avalanche of like-minded and mindless "body count flicks" with absolutely nothing on their minds other than making a quick buck by projecting as much Karo syrup blood and naked tits across the screen as possible. Sex and violence are both obvious box office draws so the fusion of them would theoretically ensure a lucrative take, thus filmmakers all over the place sought to rake in some of that cash by churning out shitty, by-the-numbers gore-fests, most virtually indistinguishable from one or the other.

During this flourishing of sanguinary cinema, FANGORIA magazine would feature cover stories chronicling each new slasher flick to issue from the pipeline, and one of the most intriguing-looking was 1981's THE BURNING. The magazine article gave gorehounds page after page of outrageously gory images that certainly piqued our curiosity and got us very interested in seeing the film, but shortly before THE BURNING was due to come out the backlash against slasher movies began in earnest and the genre was forced to knuckle under to censorship complaints in order to keep an R rating and avoid earning the dreaded X, which would have kept out all moviegoers under the age of eighteen. (Anyone who has ever been an enterprising teenage fan of material that's allegedly "adult" enough to earn a movie an R can tell you for a fact that it's pretty easy to get in to R-rated movies because the staff at most movie theaters simply do not give a fuck, just so long as cash crossed through the ticket window's threshold.) This pointless backlash essentially ended up cutting the balls off the slasher genre by preventing the films from being seen as intended, with many being released to screens with such thorough sanitizing that the movies became frisson-free parades of terrible acting by clearly overage "teenagers" that may or may not have provided even the requisite bare tits (which, back in those days, were refreshingly all-natural), so audiences were not satisfied and the genre inevitably shriveled up and died when the money stopped rolling in. All of which is a long-winded way of providing some background leading up to a discussion of THE BURNING, a film that was a glaring casualty of the backlash and released worldwide in several heavily-edited versions, each reportedly being an almost complete waste of the gorehound's time if not for some truly lovely actual boobs gracing the screen.

Now available on DVD in its uncut form, THE BURNING surprised the hell out of me for a number of reasons, including the fact that it's the brainchild of the Weinstein brothers and is in fact the first film from Miramax. As you no doubt gathered from the legend at the top of this piece, the movie has to do with the accidental and utterly horrible immolation of a summer camp janitor/groundskeeper named Cropsy, only the narrative proper deals with the tragic aftermath of that prank gone wrong and opens five years later, once a hideously burn-scarred Cropsy is released from the hospital. A rotten asshole of a human being in the first place, the now monstrous Cropsy has had five years in which to stew over what happened to him and to allow thoughts of gruesome vengeance to twist his mind, so after killing a whore almost immediately upon hitting the streets, Cropsy makes his way to Camp Stonewater in upstate New York (the summer camp just across the river from Camp Blackfoot, the site of his immolation), where he gets down to the business of viciously and randomly murdering innocent teenagers.

If this sounds like the basic outline to a garden variety slasher opus, it pretty much is, only this time around the movie actually takes time to flesh out its psycho-fodder cast for about forty-five solid minutes that are never boring and features a cast of very recognizable young actors, most making their screen debuts, including:
But by far the most well-known cast member is Jason Alexander (age 21 when the film was shot), aka SEINFELD's George Costanza, complete with a full head of brown hair, in the unlikely role of an under-18 camper. He looks every bit his age and it took me a while to realize that he wasn't supposed to be playing one of the counselors, but the familiar delivery and comedic chops were already in place and firing on all cylinders. 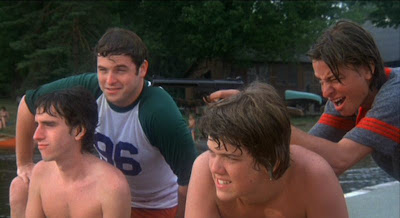 Yes that's SEINFELD's Jason Alexander in the number jersey, complete with hair and playing someone who's supposed to be a camper, not a counselor. FAST TIMES AT RIDGEMONT HIGH's Brian Backer sits in front of him, while SHORT CIRCUIT's Fisher Stevens sports a happenin' striped shirt.

If the film eliminated the slasher angle entirely, what remains would have made for a passable summer camp teen comedy, depicting as it does the most irresponsibly-run place one could ever send their kids to for the summer. There's a certain amount of supervision, but the counselors take absolutely zero notice of the fact that that campers play poker for cash stakes and smoke and drink right in front of them, to say nothing of very obviously engaging in sex in the woods, but then again the counselors are engaged in exactly the same activities themselves, sometimes with their underage charges, so I guess it's all okay. (Where was Camp Stonewater when I needed it, namely during my awful and unwilling stay at Camp Hi-Rock in the summer of 1979? Not a hope of beer or pussy, goddammit!) But while such activities often serve as the direct cause of teen mutilation in the majority of slasher flicks and unintentionally (?) drive home a puritanical lesson that having sex, indulging in mind-altering intoxicants and having fun of damned near any kind in one's all-too-fleeting youth is "bad," THE BURNING treats such common teen adventures as simply being a part of life as it was back in those days, leaving Cropsy's motivation as being purely revenge-driven.

The plot is obviously nothing worthy of great literature, but as an E.C. Comics-style horror yarn it's simply perfect. After the first forty-some-odd minutes of character development, two counselors take a decent-sized group of campers downriver on an overnight camping excursion, and upon arrival at their destination Cropsy gets to work on his agenda of retroactive abortion, stealing the party's canoes and stranding his victims in a situation reminiscent of the old "fish in a barrel" setup. By that point we've gotten to know the characters well enough to care about most of them, so when Cropsy kills them off one by one you won't necessarily be happy about it (unlike the majority of these movies, wherein the teens are such a bunch of obnoxious assholes that you actually end up rooting for the killer and want to award him a commendation and the key to city when his deadly job is done). Particularly tragic and horrifying is the utter massacre of about six campers as they attempt to paddle upriver on a makeshift raft in search of help, only to meet their untimely demise on the business end of Cropsy's ever-present hedge-trimming shears. That sequence is particularly nasty and quite memorable, especially when Fisher Stevens attempts to shield his face with his hand, only to lose all his fingers in a fountain of gore as Cropsy deftly snips them off. 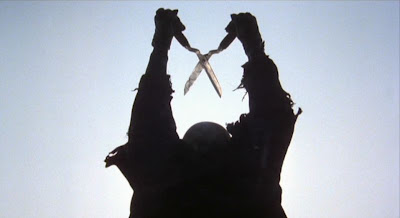 The whole story feels like a properly told scary campfire yarn and it brought me right back to my fondly-remembered years as a camp counselor, when Camp Mahackeno's director instructed us during training that we were not to tell the kids scary stories of escaped, hook-wielding, disfigured maniacs for fear of traumatizing the living shit out of them. It made me think of the days when the usual outdoor activities got rained out and we'd retreat into the large utility barn to watch projected VHS movies that would offend no one, and oh how I longed to be able to delight the kids with movies like THE BURNING and other such shiver-inducers...

So the bottom line on all of this is that THE BURNING is definitely worth the viewing time of the seasoned gorehound and the curious NetFlix renter. Unlike many of its contemporaries, it's never boring, it delivers on the graphic violence, and reminds us of why the days before the plague of breast implants were sacred indeed. TRUST YER BUNCHE and check this one out, especially now that it's finally presented in the way it was meant to be experienced. Sheer brainless fun, and definitely better than most of the tepid so-called shockers that scarcely merit an R these days.
Posted by Bunche (pop culture ronin) at Wednesday, December 09, 2009

Huh.Maybe I need to give this one another look. I saw the cut version back in the '80s (on a double-bill with Maniac - savor the irony!), and it bored the crap out of me. A Fangoria fan myself, I was wondering where the Tom Savini gore effects had gone. Later on, I read about the trim-job that must have been administered by Cropsey's own shears. I'm glad to hear that a restored "cut" of the film is now available. Maybe, if I'm bored, I'll try watching it again. After years of solid recommendations, your testimony holds weight with me.

(Yes, the double-entendre was intentional.)

I've put it on my Netflix list. Been 28 years since I last saw it so I'm looking forward to it!