Let's face it: dirty comics are nothing new. They've been around at least since the days of those nasty eight-page "Tijuana Bibles" that depicted celebrities and popular comic strip characters getting their hump on with grossly exaggerated genitalia running rampant, and were further popularized by the underground comics boom of the 1960's, particularly the fleshy, sweaty and at times downright filthy spewings from the febrile pen of Robert Crumb. I have loved Crumb's work since first sneaking issues of ZAP COMIX and other such forbidden treasures into the house when I was thirteen, and as I got older and gained more wisdom in the area of the couplings that he delineated, I appreciated his stuff for the simple fact that he was a geek, and in case you didn't know it, we geeks tend to be a sex-obsessed lot. As such, Crumb's interests fueled his illustrations with a realistic animal lust never before seen in the medium; to put it bluntly, the reader could feel the urgency in the character's parts, and those black & white cartoon pussies appeared to be every bit as humid and inviting as the real thing. But the one aspect of Crumb's work that rendered his pornographic efforts somewhat offputting to many (myself included, depending on the story in question) was a pervasive sense of fear and even hatred of women, something that Crumb's later-period works seem to have grown past, but it's a real shame that his unmatched talents could not have been channeled into a work that celebrated sex with the detailed eye and sense of humor that he freely displayed in almost everything he created. Only Richard Corben has come close to equaling Crumb in the arena of squashily-rendered torsos engaging in the skin-to-skin bossa nova, while far lesser "talents" crank out unpleasant dreck like HORNY BIKER SLUT and VEROTIKA. But then guys like Dave Cooper pop up from out of nowhere and breathe a breath of fresh air into the fetid atmosphere of the sex comics seraglio. 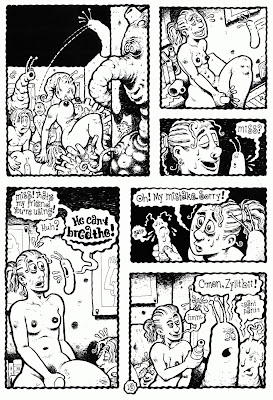 Just a minor taste of the wacky and free-wheeling orgasmic smorgasbord found between the comic's covers.

So scour the back issue bins of your favorite comic shop or search the Internet and track down this unsung gem of comix erotica. No shit, this treasure deserves a place on your naughty bookshelf, right next to the waaaaaaaay raunchier YOUNG WITCHES Volume 2, a collection that needs a serious lesson in class, which CYNTHIA PETAL is more than capable of giving.
Posted by Bunche (pop culture ronin) at Thursday, December 10, 2009

Personally, I've always been a fan of XXXenophile, Omaha the Cat Dancer and Mara: Celtic Shamaness. All three were well-drawn, decently-to-very-well written, and infused with a joyful - and occasionally terrifying - sense of erotica. Omaha was probably the best of the lot, displaying a complexity of character and story that the other two titles lacked. XXenophile was just plain fun, and Mara has my vote as the best-drawn of the three titles, although Dennis Cramer's... um, predilections... tended to make it very much a specialty affair.