THE GREAT DEBATE: DOLLS OF EVIL!

Occupying an admittedly small niche in the annals of horror is the killer doll, a concept that takes something so innocent and renders it into a force of sheer, full-blown terror. There have been several examples of this monster in books, TV and movies, but there are inevitably three who stand out from the pack and are usually named as the ne plus ultra of the lot. Those would be: 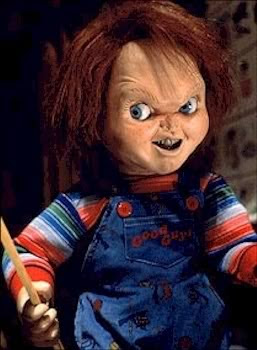 Chucky, a "Good Guy" doll possessed by the spirit of a homicidal maniac, first seen in CHILD'S PLAY (1988). 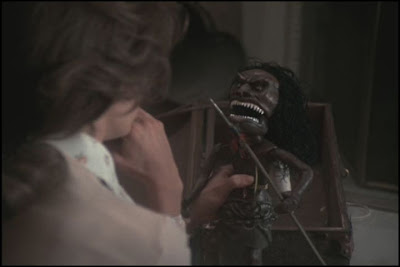 The unnamed and unforgettable Zuni fetish doll that relentlessly hunted Karen Black in the made-for-television TRILOGY OF TERROR (1974). 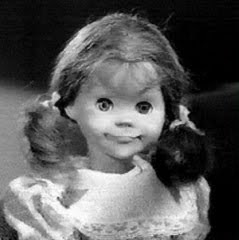 So I ask you, dear readers, which of these three is the one that makes you fudge your undies? For me it would be Talky Tina, hands down. The other two certainly have their merits, especially the Zuni warrior, but Talky Tina just creeps me the fuck out on a completely primal level. Discuss.
Posted by Bunche (pop culture ronin) at Friday, December 18, 2009

I have to agree with you on picking Talkie Tina. The other two are formidable, but beatable. Tina is inescapable.

As for ones that actually scared me, I'm gonna have to think about that.. : )

Tina's the worst of this lot. But sorry man, for my money the one that scared the piss out of me all through my pre-teen years -- as in, really, I couldn't sleep for months -- was the clown from Poltergeist.

I didn't forget Black Devil Doll from Hell; I didn't include it because it simply never comes up as even remotely scary. Hilarious, yes. Scary, not in the least.

I haven't seen the Twilight Zone episode, so I'll go with the Zuni doll. Four decades gone and that one's still a classic!

Can't say I've seen any of these, so I'd have to go with something I saw a long time ago, I think in a soap opera. (I don't remember which.) This woman was having a nightmare in which she opened her closet door and inside was this eight-foot Raggedy Ann-type doll that immediately wrapped its huge arms around her. It was saying "Mommy! Mommy!" and would not let her go as she screamed and struggled and tried (and failed) to get away. Man, that freaked me out.

I don't remember the Twilight Zone episode very well, but based solely on the still photos, Tina is creeping me out the most. The dude from Trilogy of Terror second.

As for Chucky, I kinda want to knock back a few drinks with him in a bar. Yeah, I know he's a serial killer and all, but he seems like a good guy to hang with.

Oh, it's gotta be the Zuni fetish doll. That was the scariest thing I ever saw in my life at the time.

It never scared me, but I used to freak out a kid I babysat by imitating the Zuni fetish doll. He started acting up, all I had to do was go YI-YI-YI-YI-YI-YI and he'd be an angel. Hopefully I didn't traumatize him for life.

Chucky never really frightened me, but that fetish doll did the trick since I saw that film at a very young age and could never get it's image out of my head.