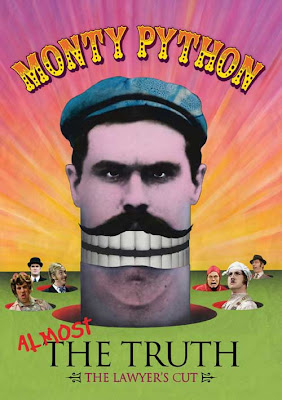 I'll just cut right to the point: I fucking love Monty Python, and if you do too I cannot possibly recommend this boxed set highly enough. It's a six-hour documentary on the landmark British comedy troop that is so exhaustive and informative that it upon its release it instantaneously rendered all future documentaries on the subject utterly superfluous. Pretty much everything you'd ever want to know about the Pythons and their histories as both individuals and a team can be found somewhere in here, recounted by the surviving Pythons themselves (along with archival interviews with the late and very much lamented Graham Chapman), and it's a fascinating look at how a pack of Brits and one lone Yank inadvertently changed comedy forever.
There are many extras and full-length interviews included, plus a (failed) attempt at answering the eternal question of exactly who should rightfully be considered the seventh Python, namely Carol Cleveland or Neil Innes (my vote unhesitatingly goes to Cleveland), and the while film is littered with commentary by many clebrities and comedy pros who were influenced by the Pythons (Russell Brand's comments are great). Simply put, a majorly solid winner across the board that should be immediately added to the collection of every serious (?) Python fan. No lie, dear readers, get off your ass and snag yourself a copy immediately!
Posted by Bunche (pop culture ronin) at Thursday, December 17, 2009