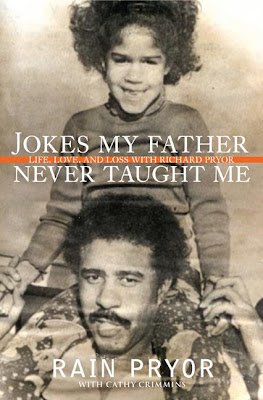 I’m no stranger to family dysfunction yet I’m fascinated by the accounts of others’ experiences within the special Hell that can only be found at home, especially the homes of celebrities. My love of Richard Pryor’s brilliant, pain-fraught comedy has lasted for three decades and lead me to read just about anything I could about his turbulent, utterly fucked-up life, and the most recent book to plumb those depths tells his story from an unexpected perspective.

JOKES MY FATHER NEVER TAUGHT ME: LIFE, LOVE AND LOSS WITH RICHARD PRYOR is the eloquently profane memoir of Pryor’s third child, now forty-year-old Rain, the dead ringer spawn of Richard and a blonde, Jewish go-go dancer, and her narrative of her life from the moment she met her dad at age four is a compelling read. All the familiar tales of Richard Pryor’s excesses are present but there’s a certain extra punch in the guts when those stories are related from the point of view of a now-adult little girl whose time with her dad was punctuated with physical abuse, a constant parade of whores, her father’s addictions and insecurities, and the agonies of growing up half-Black and half-Jewish (yeah, being Jewish is not an ethnicity so one can't really be "half-Jewish," but that's how Rain describes herself). When not staying with her father, Rain was raised by her mother and grandparents in an observant Jewish household, so at various times in her life she was told that she was neither Black nor Jewish enough — her grandparents even suggesting her mother put her up for adoption because she was a potential visual embarrassment, an idea that they later thought better of — and while weathering the difficulties of trying to maintain a relationship with her father and bearing witness to her mother’s steady emotional decline, she sought to find her ethnic/cultural identity and define herself as her own human being. 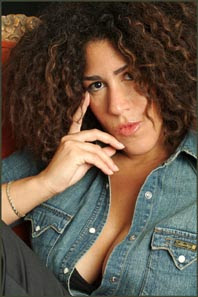 The grownup Rain Pryor.
If all of this sounds like some self-pitying “you GO, girl!” page-turner, it most definitely isn’t; Rain is savvy enough to know that anyone who’d buy this book is probably most interested in hearing about her dad’s sordid world of drugs, pussy, violence, shattered relationships and abandoned children, so that’s what she gives us, yet somehow making it clear that she adored her dad, even when he was at his worst. The book is also an interesting look into the life of a kid who endured a lifestyle that ping-ponged between her mom’s working class worries over money and day-to-day concerns and her dad’s lavish comedian-as-rock-star existence, both influences that inspired her to become an actress and playwright. Rain’s adolescent years were as painful and awkward as those of any of us, but her adventures walk a thin line between girlish fantasies come to life and reality sticking its dirtiest finger straight down the throat of the little princess’s living daydream. Her attitudes on sex, love, self-worth and life in general are spelled out with a stark honesty that is seldom seen in tell-alls of this type. Highly recommended for Pryor fans and the curious alike. 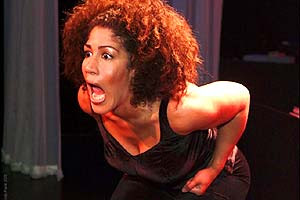