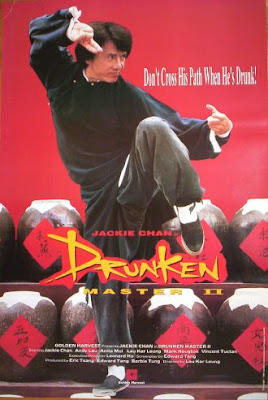 Jackie Chan in DRUNKEN MASTER II (1994), an instant classic and one of the ten best martial arts films ever made.

How long has it been since Jackie Chan made a good movie? I love the guy for his charm, comedic chops and truly incredible willingness to stage and perform mind-boggling stunts and kung fu, but has he done anything of worth since the epochal DRUNKEN MASTER II (1994)? Since then it seems to me like he's made a slew of films that range from the mediocre to the downright horrendous, and now he's starring in a film whose poster, as seen in my local subway station, elicited agonized groans and much eye-rolling from myself and many of the commuters waiting for the Manhattan-bound R train. THE SPY NEXT DOOR is clearly a kiddie flick and there's nothing wrong with that, but it has all the earmarks of something that Eddie Murphy, a once great talent, would do nowadays, and that just fills me with both sadness and dread. I was initially inspired to post about this because of the version of the poster previously mentioned, namely this one: 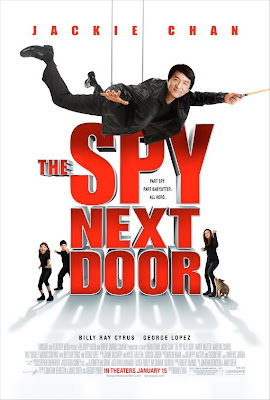 But then, while searching for the poster's image online, I found this alternate poster which blows the first one out of the water for sheer cloying awfulness. I mean, look at this shit: 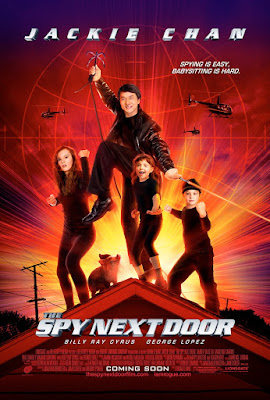 Did Jackie learn nothing from THE TUXEDO? Apparently not, because here we have Jackie as a babysitting super-spy with three young charges, along with an adorable pig for extra cuteness value. Kids. And a fucking pig. Truly we are in the Last Days.

Oh, and do not get me started on the offensiveness of the clearly kung fu-based KARATE KID remake being titled THE KARATE KID...
Posted by Bunche (pop culture ronin) at Saturday, December 26, 2009

Arg! It's not even a well-done poster. My students could do better than that!

I guess that when your body is one aching mass of scar tissue, there's not much more you can do... except pass the torch with class, as he does in the airport scene of The Protector.

(Well, he did "appear" in Kung Fu Panda, but just barely.)

the tuxedo was an interesting idea, just played out horribly. The one thing I can't get about the Karate Kid is WHY THE HELL DO THEY MOVE TO CHINA? China is the LAST place I would move to, all those stories of how they treat people during the olympics and the like. Technically, there are enough differences to make it more then a remake, but not a sequel, it's a seq-make. Now excuse me as I run to get that copyrighted

A film blog I read posted this image under the headline: "Jackie Chan owes money to the mob."

Saw this, thought of you. Enjoy!