Looking for a movie that's guaranteed to make this year's drunken Christmas Eve gathering of like-minded friends a memorable excursion to one of the crazier corners of the B-movie dimension? Dear Vaulties, say “hello” to INFRA MAN, finally available under its original Chinese title (SUPER INFRAMAN) in a beautiful widescreen transfer that's every bit as kickass as the movie itself. 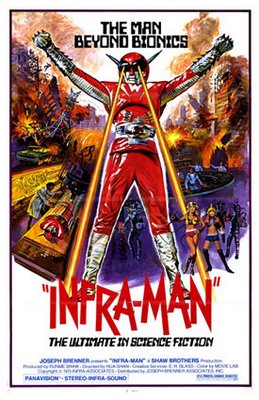 Released in China in 1975 and hitting these shores the following year, INFRA MAN is among the most demented spawn of the venerable Shaw Brothers studio, a company beloved worldwide as the quintessential purveyor of old school kung fu films. Ripping off, er, influenced by the classic Japanese super-hero show ULTRAMAN (1966), this film is more fun than a weekend with Lynda Carter where she brings the cocoa butter and ties you up with the Lasso of Truth. Universally loved by those who have seen it, INFRA MAN is even championed by no less a film criticism luminary than Roger Ebert himself, and he loves it for exactly the same reasons as us Joe Sixpacks in the audience. This is a movie replete with what fans of super-heroes, monsters and virtually nonstop action look for in their entertainment, namely fists-a-flyin’ martial arts, an army of monsters who are not only hell-bent on conquering the world but also blatantly enjoy being evil, one of the most memorable villainesses in cinema history, ridiculous dialogue aided and abetted by terrible dubbing, and a super-hero who takes the fight to the bad guys like you’ve never seen. In its entire eighty-eight-minute running time there are perhaps five slow minutes and rest is a semi-psychedelic festival of in-your-face crazy fun.

The story gets off to a slow start with the Earth bursting open all over the place, causing earthquakes, collapsing buildings, spewing lava and incidentally reviving an ancient evil that has lain dormant since time immemorial. Said evil is Princess Dragon Mom — yes, you read that right — a blonde Asian woman played by Terry Liu in a horned helmet, a pointy, gold Madonna-style bra, a cute little pink bow around her neck in case you couldn't tell she's a girl, matching dragon-headed platform boots a la Gene Simmons, and a right hand that doubles as a whip. Broadcasting an address to the entire world she announces:

“Greetings, people of Earth. I am Princess Dragon Mom. The destruction you see is but a small sample of my great power! I have taken over the earth and there is nothing you can do about it! You will be my slaves for all eternity! I have spoken, and that’s all the warning you are going to get!”

And she meant that shit! 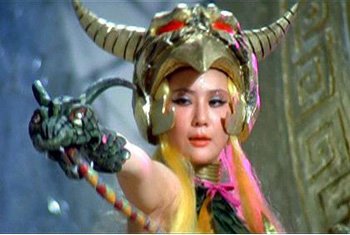 Terry Liu as Princess Dragon Mom, one of the greatest bad guys in movie history.
We are then introduced to the Princess’ bargain basement monster army, an ultra-phony lot who look like the bastard children of Gwar and Sigmund and the Sea Monsters, only with less of a budget. They cheerfully joke and boast among themselves about just how they will destroy mankind and beg the Princess to let them loose immediately to kick some human ass; these guys ain’t kidding, and they jump about hyperactively in anticipation of doling out world-class nastiness.

Luckily for us, Professor Chang of the Science Patrol (a bunch of guys in cheap silver and blue jumpsuits who ride around on motorcycles a lot) has figured out that Princess Dragon Mom is a creature from antiquity who ruled the world in the distant past (this information is prefaced with the statement that nothing is known about her, so go figure), and he has just the solution to the problem: Infra man, the “Man Beyond Bionics,” as the movie’s poster so kindly informs us.

Recruiting the Science Patrol’s resident bohunk Rayma (Li Hsui-Hsien, star of the also insane THE MIGHTY PEKING MAN, aka GOLIATHON) for cyborg conversion, the professor gifts him with an incredible arsenal of built-in weaponry such as ray beams, “Infra Blades,” heat missiles, “Thunderball fists which can destroy everything,” super-senses and strength, and enough kung fu skills to make Bruce Lee say “Gaw-Dayum!”

Among many, many other insane moments, one of the film’s highlights is Infra Man’s battle with the ranting Spider-Man (no relation), who suddenly shoots up to two-hundred-feet tall when he realizes he’s losing the fight. Infra Man ain’t having it and, in a stunning example of a hero pulling powers out of his ass, he too becomes a giant and beats the living crap out of Spider-Man (or rather the empty foam rubber suit of Spider-Man). After getting hurled into high voltage power lines, the monster shrinks back to normal size and the towering Infra Man steps on him like the bug that he is, causing cartoonish gore to spew with appropriate flatulent sound effects. Needles to say, that moment absolutely killed when seen on the big screen with an into-it audience. 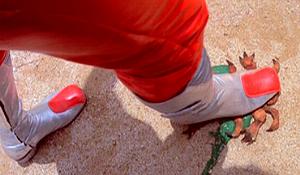 The rest of the film builds to a dizzying crescendo as our hero storms Princess Dragon Mom’s lair, hands out explosive death to her remaining army of monsters and robots, and finally engages the Princess in mortal combat after she turns into a seemingly unkillable dragon.

Folks, this flick is a stone hoot and will delight kids and drunks everywhere. Seriously, you owe it to yourself and other like-minded loonies to see INFRA MAN. It ain’t high art, but it is flat-out one of the most entertaining movies ever made. Oh, and while am usually a subtitles guy, this film simply has to be experienced with the English language audio track; it's a triumph of unintentionally awful and hilarious dubbing, and your cinematic education is sorely lacking until you've witnessed its idiotic glory for yourself.
Posted by Bunche (pop culture ronin) at Friday, December 11, 2009

This is far and away one of my favorite movies, and has been since I was about 11.

Let's just thank our lucky stars that Infra-Man remembered the scientists (formerly unmentioned) advice that, should he ever find himself encased in liquid ice, he could free himself using five rockets (which he happens to have available).

It's reasons like that why I check the blog everyday.